The WUI and what it contains and why it’s important

A wildland-urban interface area is, “that geographical area where structures and other human development meets or intermingles with wildland or vegetative fuels.” Approximately a third of all housing units in the United States are located within an area that meets this definition. As incidents of wildfires destroying buildings and entire towns increase, jurisdictions are increasingly adopting the International Wildland-Urban Interface Code.

According to the National Fire Protection Association, there is good reason for IWUIC adoption. In 2018, NFPA reported that more than 58,000 wildfires burned over 9 million acres in the United States. Twenty-five thousand structures were damaged, including more than 18,000 residences. If development trends of the past thirty years persist, these numbers will only increase as urban areas encroach further into wildlands. Climate change is expected to escalate incidents of drought across much of the United States. Drier trees and vegetation will exacerbate the threat of wildfires everywhere.

The IWUIC is compatible with all of the International Code Council family of I-Codes, including the International Building Code and International Residential Code (IRC). As a result, its provisions can be easily adopted as supplemental material into the IRC, IBC, or any other model code. But what is this code and what does it require?

What the Code Entails

The IWUIC establishes a minimum set of requirements, intended to provide additional protection to life and property by decreasing the likelihood of a wildfire encroaching upon or burning property. Like any other code, the provisions are written in mandatory and enforceable language. Also like other codes, a jurisdiction can adopt all or some of the provisions based on the specific issues encountered there. Finally, even if the code is adopted in full, existing structures built to comply with earlier codes are not subject to additional requirements.

California provides a good example of how strengthening building codes can reduce loss of structures. In 1980, the Panorama Fire started in the mountains and reached the city of San Bernardino. Subsequently, the Oakland Hills Fire of 1991 destroyed 2,500 homes and killed 25 people. In the wake of these losses, the legislature ordered the Department of Fire Protection and Forestry to map major fire risk areas across the state. Maps of California’s “fire hazard severity zones” ultimately encompassed one-third of the state's land mass. By 2008, a chapter was added to the state building code that mandated extra fire protection of homes and businesses in areas with significant fire risk.

As a result, when the Camp Fire ravaged Paradise, California, in 2018, the Associated Press reported that 51 percent of the 350 single-family homes built after 2008 and located in the path of the fire were undamaged. This was true despite the fact that the Camp Fire killed more people and burned more structures than any fire in the state’s history.

According to ICC, the IWUIC is currently in use or adopted in 20 states. This is true, but because of the patchwork nature of building codes the claim suggests more widespread adoption than is actually the case. According to research performed by the Insurance Institute for Business and Home Safety, only four states—California, Nevada, Pennsylvania and Utah—have adopted statewide mandatory WUI codes. As noted above, California has not adopted the IWUIC per se, but rather in 2008, formulated its own WUI code based on fire severity maps.

To fill the breach between statewide adoption of the IWUIC and scattered jurisdictional adoption, eight states have programs that cater directly to residents of WUI areas. Additionally, in almost every state, the NFPA offers Firewise USA programs, often with the support of state and local agencies. The Firewise USA initiative predates by a few years the 2003 introduction of the IWUIC and this voluntary community-based program has significant overlap with elements of the IWUIC.

The basic principles of mitigating wildfire risk, which are included in the IWUIC, IBHS’s new Wildfire Prepared Home program, and Firewise USA, emphasizes the importance of fire resistant roofs, eaves, soffits, gutters, exteriors, glazing, decks, fencing, and vegetation, including the creation and maintenance of defensible space around dwellings.

Now that we have established the importance of the IWUIC, it would be prudent to examine it a little more closely. The IWUIC begins with several chapters/sections common to all of the I-Codes. This includes a preface, information on the code development process, the organization and layout of the code, as well as how to implement the code. Scope and Administration dives deeply into how the code is applied, enforced and administered.

Definitions are addressed next. In all codes, definitions are exceptionally important as they ensure all users understand the precise meaning of terms used in the document. For example, “wildfire” is specifically defined in the IWUIC as, “An uncontrolled fire spreading through vegetative fuels, exposing and possibly consuming structures.” This definition makes clear that the source of the fire is inconsequential to the definition. As a result, the term “wildfire” encompasses both fires ignited by a natural source, such as lightning, and fires sparked by human behavior, such as setting off fireworks.

The process and procedure for declaring, recording and evaluating what the WUI area encompasses are laid out in Chapter 3. WUI areas must be designated based on fact finding and simple baseline criteria are given. Finally, the means and methods of establishing the WUI as a legally recorded and recognized area within a jurisdiction are covered here, and include both official designation by a legislative body and regular cycles of review by code officials. 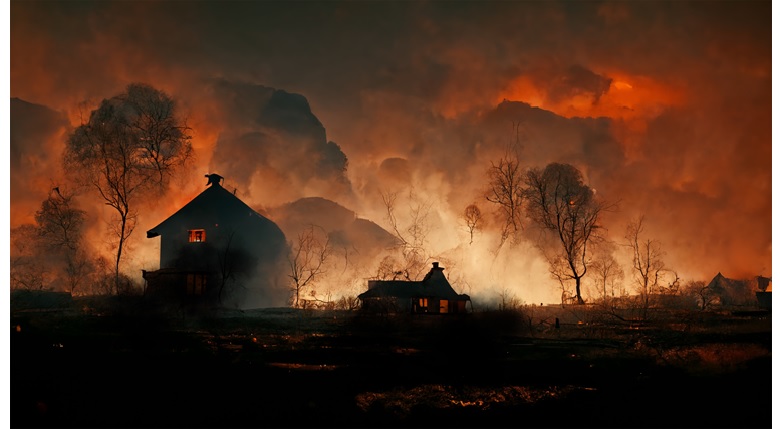 Chapter 4 is entitled “Wildland-Urban Interface Requirements.” These requirements can be summarized as follows:

In short, the intent of this language is to ensure that fire services have the ability to fight a fire in a WUI area quickly and effectively to minimize spread.

“Special Building Construction Regulations” is a chapter aimed at “establish(ing) minimum standards for the location, design and construction of buildings and structures based on fire hazard severity in the wildland-urban interface.” Construction regulations address building material criteria including the fire rating of roofing membranes, eaves, soffits, gutters, glazing, decks, and exterior wall construction. Criteria for these materials are further delineated as they apply to different classes of buildings, the fire hazard severity level, and existing wildland terrain including slope and fuel load.

The minimum requirements to mitigate spread of fire from a structure to the landscape and from the landscape to a structure are described next. Chapter 6 mandates inclusion of spark arresters on chimneys, and regulates storage of combustible materials such as firewood and liquefied petroleum gas—major sources of heating in areas without municipal infrastructure. Landscaping requirements are directed at establishing “defensible space” around structures by limiting vegetation to create low-fuel areas around structures that limit fire spread.

The final chapter of the main body of the code is Chapter 7 Reference Standards. This is another chapter common to all codes. It is important to note that any standard adopted by reference in any code is considered mandatory.

The IWUIC has many appendices. Appendices, generally, fall into two categories. One type is informational – knowledge that makes the code easier to use and understand. Other appendices offer additional language for adoption by the local jurisdiction and are written in mandatory and enforceable language. Often these are referred to as jurisdictional options. In the IWUIC, appendices A through C would be considered jurisdictional options, while the other appendices (D through H) are informational. One additional appendix (I) discusses the establishment, appointment criteria, and procedures for a Board of Appeals to the code.

Appendices A through C provide options for strengthening the IWUIC code within a jurisdiction. Language related to Chapter 6, include placing additional and more restrictive requirements on the storage of combustible materials is Appendix A. An authority having jurisdiction could also require more extensive vegetative controls, such as mowing and cutting along roadways and electrical lines and even the ability to limit or prevent access to areas when fire danger levels are high. Requiring submission of Vegetation Management Plans (Appendix B) as part of the permitting process is another means of safeguarding building sites during and after construction by minimizing vegetative fuel load at the outset and mandating maintenance. Appendix C, “Fire Hazard Severity Form” provides an alternative option for assessing actual conditions to determine the fire hazard level of a specific site.

The IWUIC is a comprehensive means of codifying ways to minimize fire damage to structures in the wildland-urban interface, saving property and, most importantly, life. Many strategies can be employed and having a basic understanding of ways to mitigate fire hazards will allow communities to reduce the tragedies that will undoubtedly unfold due to increased fires in the wildland-urban interface.

Susan Hines, LEED Green Assoc., is director of industry issues and external affairs at the Gypsum Association, an international trade association representing the manufacturers of gypsum panel products in the United States and Canada.

Michael Schmeida, MSc, LEED AP is the director of technical services for the Gypsum Association, a trade association that represents gypsum board manufacturing companies located in the United States and Canada. His responsibilities include overseeing and coordinating standards and testing efforts for the industry.
You must login or register in order to post a comment.