WHAT COULD THE FUTURE HOLD FOR THE CONSTRUCTION INDUSTRY

This is the time of year when many of us raise our gazes from the immediate task at hand and start thinking about the coming year and how to plan for it. For some, it also means looking past the day-to-day business to industry trends we may be contending with in the next year or two (count me among that lot). Lately, I’ve been thinking well beyond 2023, looking over the horizon and around the bend.

As I do this, my attention keeps returning to trends in construction technology and automation that I expect to facilitate positive change and minimize traditional downsides, along with the support we’ll need to provide as the industry evolves, rather than after the fact.

Putting on my 2035 goggles, I envision a cold-formed steel framing industry that is on the forefront of manufacturing innovation and construction productivity, that attracts the best and the brightest workers, and harnesses big data to promote its competitive advantages.

A Robot Built My Building

Perhaps one of the most popular topics at industry meetings and educational programs is off-site construction and panelization. While site-built construction isn’t going away, I also believe that a majority of steel framing contractors will have off-site capabilities and facilities in the future. And a fair number will have integrated BIM and other forms of virtual design and construction technologies into their operations. But this isn’t where it ends.

I am convinced that we’re headed for a world with automated panel fabrication that utilizes robotics much as they are used on assembly lines to produce the one billion cars on the road today. In fact, quite a few companies in our industry are on that path. They have facilities for manufacturing pods and panels. They have adopted technology that facilitates virtual design and placement of parts in an assembly. The logical next step is robotics with pick-and-place and fastening capabilities that enable hands-free construction. 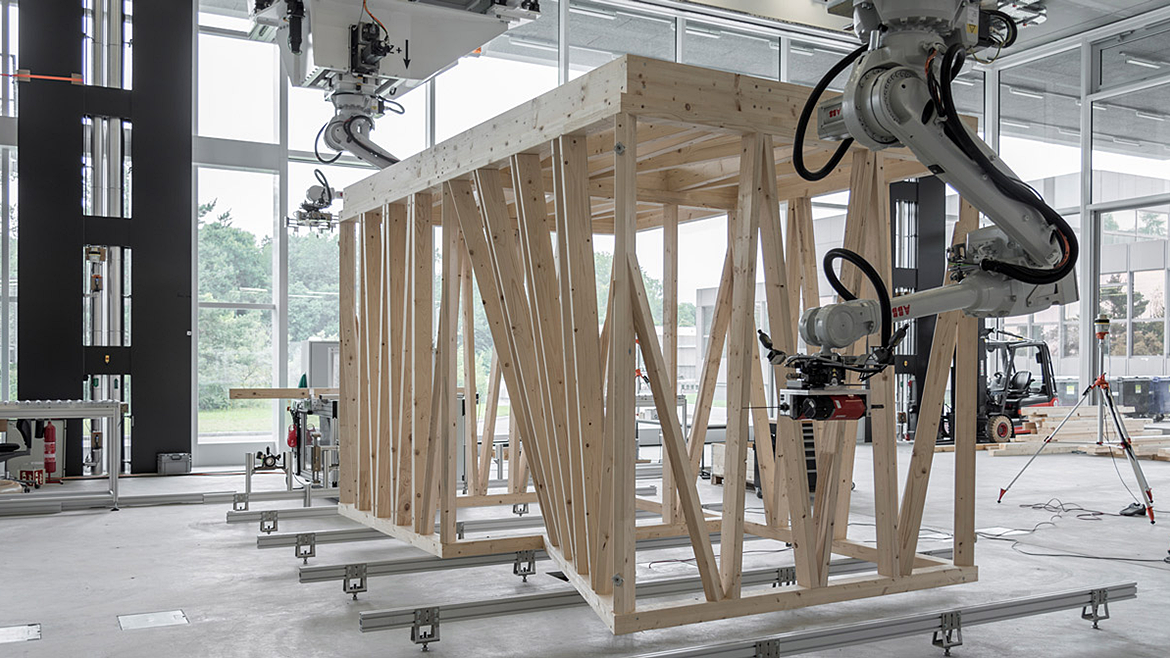 The development of robotic systems is already underway in the construction industry, including this example demonstrated by ETHZurich. Photo courtesy of ETHZurich.

As demonstrated by the automotive industry, development and adoption of a game-changer like this takes time. Prototype industrial robots were first used by General Motors in 1961 to perform spot welding. The next 20 years saw a progression of improvements, such as more maneuverable assembly arms, pressure sensitive sensors, microprocessors and machine vision systems that can interact with a changing environment. Today, robots are used for a broad range of tasks required for efficient automotive assembly and a safer environment for workers.

Although the construction industry has been kicking around robotics for years, a 2021 survey by ABB Ltd. found they are used in only a limited capacity—mostly for material handling and product fabrication. But the same survey said that 81 percent of companies expect to have robots performing a broader array of tasks in the next decade. This will require technical and mechanical innovation, with the prospect of increased output, lower waste and a consistent higher quality assembly serving as powerful motivators—much like they were for the automotive industry.

Cold-formed steel framing has a greater potential to benefit from the adoption of robotics than many other types of construction materials, simply because it is dimensionally stable and does not require the kind of adjustments that wood framing might. Wood framing typically requires a skilled operator to make compensations for bends, warps or other variations.

The CFS industry is already edging toward this future, as more contractors are using automated roll formers that can produce pre-punched, pre-cut framing members designed for specific locations in a panel. Currently, these framing members are assembled by a small crew of framers, which is a task that someday could be automated. When coupled with studs and track produced by any of the high-volume manufacturers, the same automated assembly could exponentially increase the efficiency of cold-formed steel framing.

A Robot Ate My Job

One of the greatest challenges in the construction industry today is the persistent shortage of labor. In a recent survey by the Associated General Contractors, 89 percent of construction firms reported having difficulty in filling positions, and 61 percent said this is causing project delays. The Home Builders Institute says the lack of construction workers is a main factor in the shortage of housing inventory and affordability.

Among the reasons why the labor shortage in construction is particularly acute is the perception by millennials and those born into the Generation Z and Generation Alpha groups that construction jobs aren’t as interesting or lucrative as technology, biosciences or marketing. Robotics offers the potential solution to both of these short- and long-term problems.

Robotics can address the shortage of labor required for construction of building components, such as walls, floors and roofs, by assuming the routine repetitive tasks usually performed in a panel shop. Simply replacing those workers with a machine won’t mean that you won’t need workers, it just changes the types of skills that will be in most demand.

For example, you will need more IT professionals who know how to program and maintain the systems on which advanced fabrication equipment operate. Data analysts will be needed to properly analyze the Big Data generated at sophisticated new manufacturing facilities. Framers will transition from actually fastening materials together to focusing on ensuring quality control of robot-assembled building elements. A manufacturing facility full of semi-autonomous equipment also creates the need for mechanics who know as much about pneumatics and hydraulics as they do framing.

Big Data is a Game Changer

Enormous value exists in the deluge of data points generated by a construction project, as well as information that may have previously been considered incidental to the structure being built, like weather and traffic patterns. And now technology, such as drones, phones, sensors and GPS tracking, have enabled the capture of more data than ever before.

The challenge for individual construction companies is to figure out how to access all of the potentially useful information and to effectively apply proper analysis that results in useful and meaningful insights. Fortunately, there are many tools out there to help collect and crunch Big Data, but there is still a lack of understanding and experience in correctly applying these tools. This is why trained data analysts will become essential members of the construction teams in the future.

Done correctly, harnessing Big Data can provide opportunities to improve levels of certainty in project planning and risk assessment, optimize workflows to reduce redundancies and unnecessary processes, and minimize waste. It can also guide decisions on material and equipment purchases, improve safety, and manage and anticipate financial performance. Together, these add up to a business that is more efficient and profitable.

Often considered archaic and old school, the construction industry has been undergoing a fundamental makeover into a modern, forward-looking industry that is finally starting to leverage technology to operate smarter, more efficient businesses. The risk of looking far down the road to 2035 is that there’s always the potential that world changes could throw part or all of this vision sideways, but I’d be willing to bet that we will see most of this happen in one form or fashion. The question is whether you’re ready to be part of the evolution or waiting on the sidelines to see what 2035 has in store.

Larry Williams is executive director of the Steel Framing Industry Association.
You must login or register in order to post a comment.