ROCKFON LLC, a subsidiary of Denmark-based ROCKWOOL International A/S and affiliate to ROXUL Inc., has confirmed plans to build its first North American acoustic ceiling panel manufacturing facility in the U.S. The facility will be located in Marshall County, Mississippi, approximately 31 miles from Memphis, Tennessee. 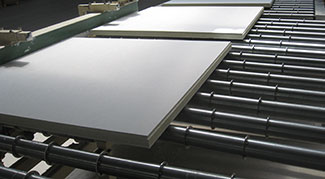 “This investment and new facility further demonstrates ROCKWOOL’s commitment to, and development of, the North American market,” said John Medio, ROCKFON’s president of the Americas. “The Mississippi facility will be ROCKFON’s fifth manufacturing facility in the world, extending global capacity and meeting the growing demand for ROCKFON’s stone wool acoustic ceiling products in North America.”

Construction on ROCKFON’s first U.S. manufacturing facility will begin in early 2016, with production expected to begin mid-2017. The site allows room for future expansion. ROCKFON is working closely with the State of Mississippi, Marshall County, and local authorities to ensure that this project is designed and constructed to meet or exceed building code and environmental standards. Once completed, the new ROCKFON facility is anticipated to span 130,000 square feet.

In North America, the ROCKWOOL Group operates under the name ROXUL. ROXUL has been in North America since 1988. ROCKFON’s new facility will be adjacent to ROXUL’s existing facility in Marshall County, Mississippi, which manufactures its full line of residential, commercial, industrial and roof board products.

ROCKFON has been operating in North America since Jan. 2013. With the acquisition of Chicago Metallic in Oct. 2013, ROCKFON provides customers with a complete ceiling system. Its product offering combines ROCKFON stone wool and specialty metal ceiling panels with Chicago Metallic suspension systems.

ROCKFON’s new manufacturing facility in Mississippi and its strategically positioned U.S. distribution centers will provide for comprehensive coverage and servicing of the North American market.