Hemp as a Raw Building Material

THE FARM TO GABLE MOVEMENT IS ON. HEMP IS CONVERTING AGRICULTURE INTO ARCHITECTURE.

Imagine not just applying plaster as a protective and decorative finish but as the primary material for the walls themselves. In point of fact, we don’t have to imagine because many traditional building techniques such as adobe, cob and rammed earth create what are essentially plaster walls and have been used successfully for millennia.

During the 20th century certain technological innovations led to further plaster construction techniques, such as earthbag, earthship, and light-clay-straw which have found application and advancement in the natural building community. In the late 19th century mechanical straw balers were commercialized in the United States. It didn’t take long before high-plains farmers realized the insulative properties of these bales as the animals in the unheated barns were keeping warmer than the family huddled around the hearth. The first straw bale homes built in Nebraska are still standing. Although straw bales are not a plaster wall, a thick coat of plaster inside and out is key to maintaining their longevity.

It's exciting to see that the 21st century is making its own contribution in this regard with farmers once again involved in its innovation. Hemp lime construction, sometimes referred to as “Hempcrete,” has been up and running for a couple of decades in the U.K. and the E.U., and after a few early projects in North America has received a major boost of interest and application from the recent, 2021 U.S. legalization of industrial hemp after its initial ban in 1937. In this first article of a multi-part series, we'll briefly discuss hemp varieties and their markets, the properties of industrial hemp as a building material and what is involved in processing it for construction. 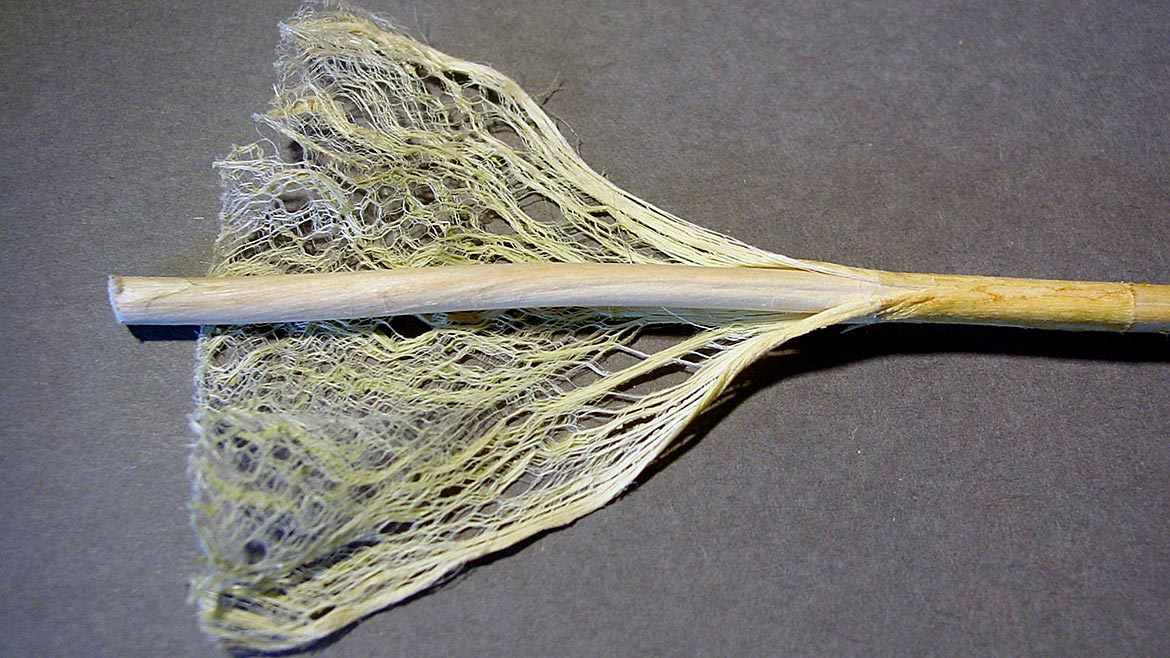 Hemp has been with humanity a long, long time. However, the specific variety of interest to us today for building purposes was first classified in 1753 as Cannabis Sativa by Swedish botanist Carl Linnaeus. We actually benefit from two words for the plant in English; hemp is of Germanic origin whereas cannabis comes from Latin. However, in common use, “hemp” typically refers to the plant when cultivated and processed for dietary, textile, and recently construction applications as distinguished from “cannabis” which tends to be the name reserved for medicinal and recreational uses. Hemp happens to be a plant that is easy to hybridize, as well, so as it turns out the different varieties have a large range of physical and chemical differences.

Hemp grown for medicinal needs having a psychoactive component (from the compound THC) is typically called cannabis. However, other medicinal hemp is cultivated to maximize another compound, CBD which is not psychoactive at all yet offers further health benefits. Moreover, there is a large dietary market for the hemp seed itself and oil derived from the seed that find both dietary and industrial applications. Industrial hemp has negligible quantities of THC present, all of the biological energy going into the stalk of the plant which in turn is harvested for both its exterior fiber and woody core. This latter varietal of industrial hemp is the most interesting for Hempcrete construction. 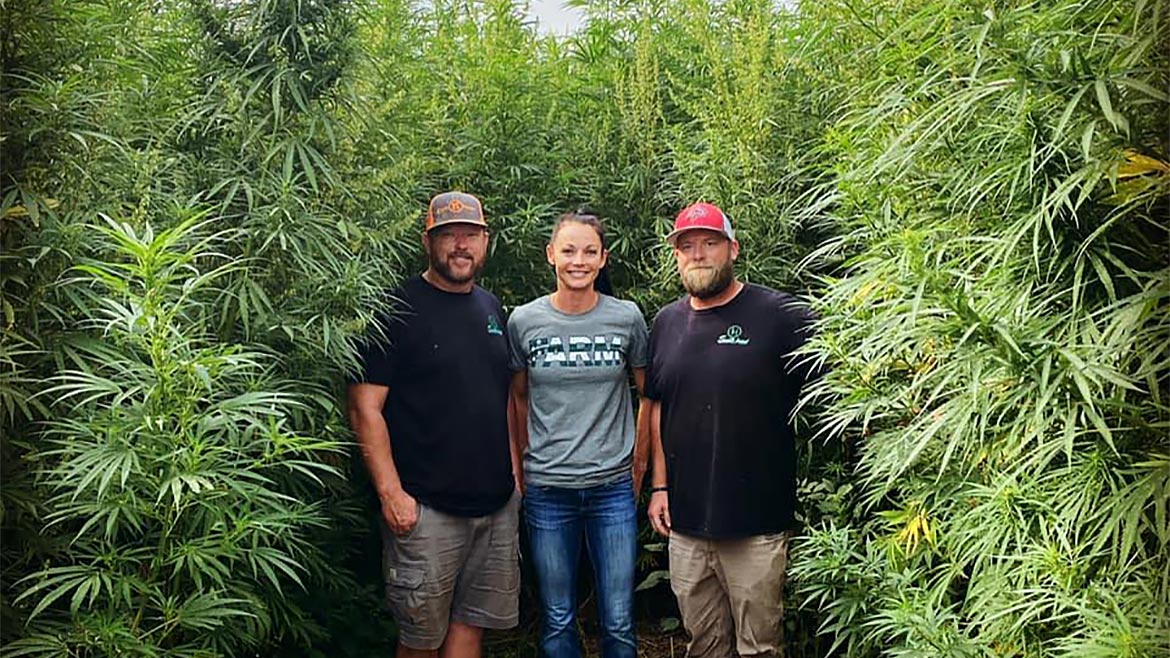 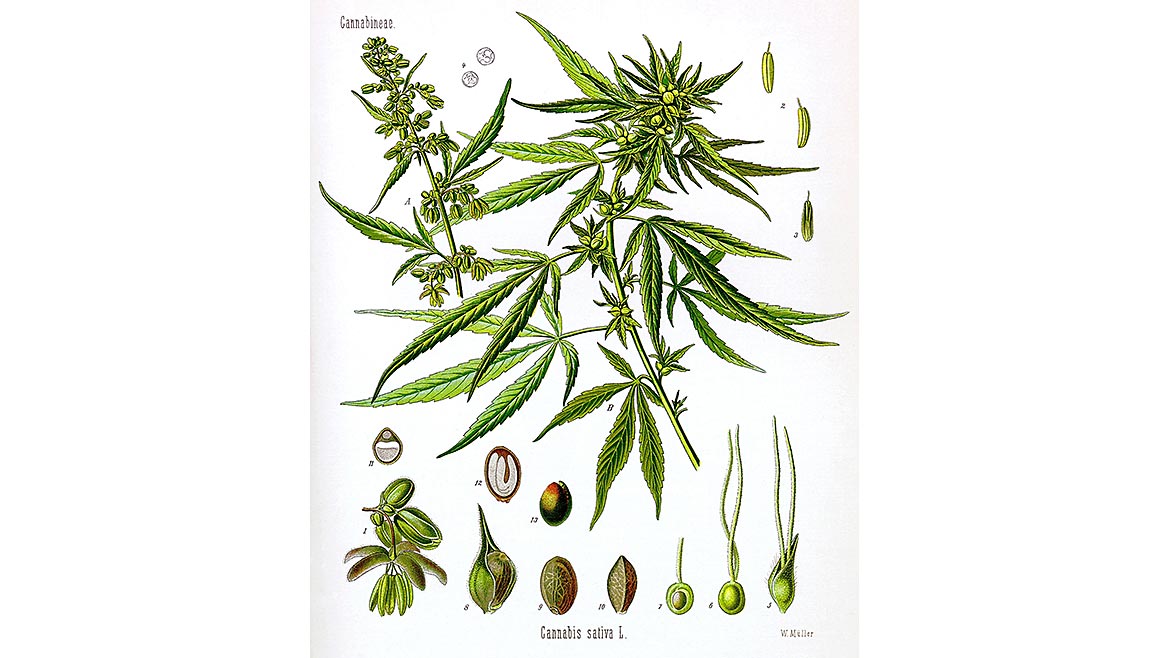 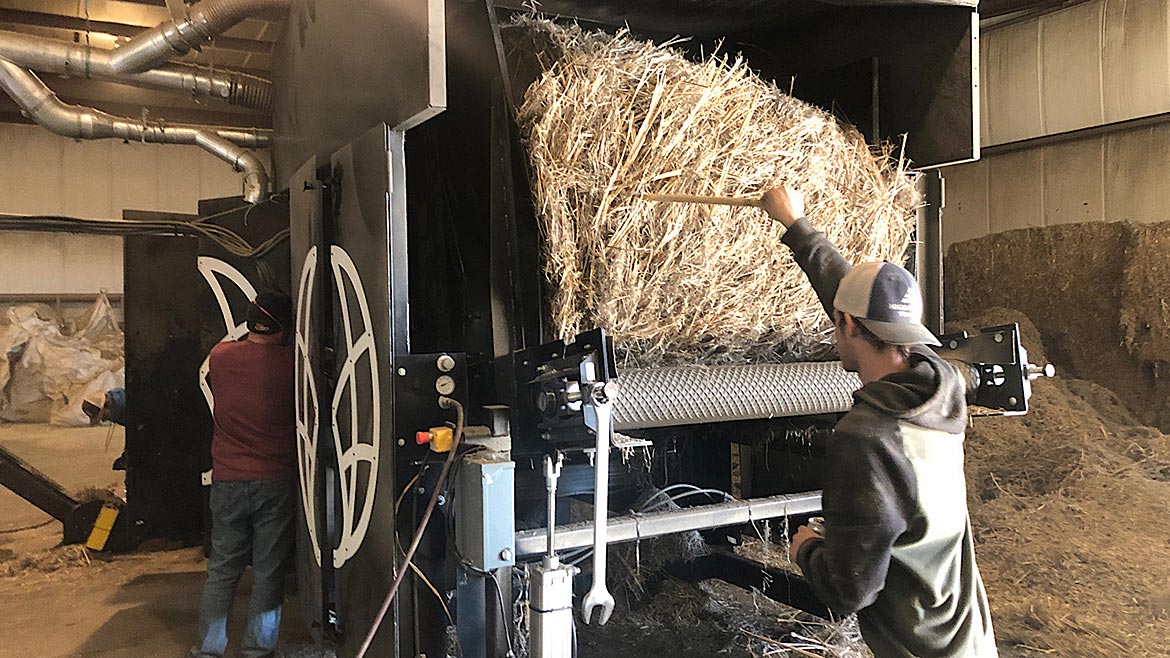 Decortication equipment stripping the fiber and cutting the hurd.

Hemp is an annual crop, like most other things growing in the spring and being harvested in late summer. Time is allowed for the stalks to dry out away from the elements in preparation for processing. It's the stalk, not the leaves or roots of the hemp plant that are used for construction. The whole stalk can be dried out and chopped up; however, for ease of mixing as well as to decrease density while increasing the insulative properties, usually it is preferred that the fiber be stripped off and only the woody core called the hurd or shiv be used. This stripping of fiber off the stalk or “decortication” involves some heavy, specialized equipment converting it into an industrial process. These are big plants growing to six, eight feet high or higher to maximize fiber lengths and facilitate decortication. The fibre typically gets sold off for a higher price to be used for rope, clothing, and other applications in the textile industry.

The hurd is essentially a waste material. But as they say waste not, want not, because hemp hurd is a great material for us! After decortication, the hemp hurd is shifted and sorted into various long, medium, and short lengths before bagging into supersacks or shrink-wrapped. At that point the hurd is ready to be shipped off to a construction project. For hempcrete construction, hemp really is the primary ingredient in the building. An entire tractor trailer load of hurd may be needed for an average-size home that is a motivating market opportunity for potential hemp growers. The hurd is really just the woody core of the plant; nevertheless, hemp exhibits a rapid growth cycle that timber can't match. Furthermore, hemp is a great rotation for many other crops providing additional motivation for supply to increase.

With our brief introduction to this raw material complete, our next article will be ready to explore how hemp hurd is combined with plaster binders, such as lime to convert it into a building material with amazing properties.

How Can Cement be Natural?