For many years, construction standards and building codes have required the edges and ends of adjacent gypsum boards to be in moderate contact. While this 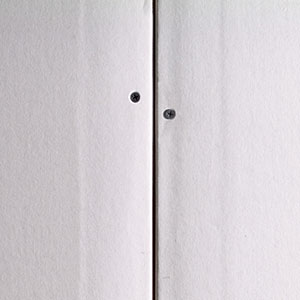 level of precision is fine for the higher performance needs of systems rated for fire, sound, or shear, it may be a bit tight for nonrated systems.

The first instance the term “moderate contact” was used occurred most likely in the Uniform Building Code many decades ago. The term continued to appear in the UBC frequently until 1997, when the final edition of the code was published. Unfortunately, there is no evidence the term was ever defined by the UBC, nor does it seem it was used or defined in either of the two other codes—the Standard Code or the BOCA National Code, which, along with the UBC, were melded into the first edition of the International Building Code.

In 2000, the moderate contact language was placed into the first edition of the IBC during the code consolidation process. Similar to the UBC, the term is not defined in the IBC, or the International Residential Code.

The first evidence of a definition for moderate contact occurred when the term and a definition were added to ASTM C840: Standard Specification for Application and Finishing of Gypsum Board in 2006. It reads as follows: “the edges and ends are butted at joints but not forced together.”

Modest at best, the definition works to an extent in that it tells an applicator not to force boards together and crush the board edges. Unfortunately, it falls short when it comes to addressing gaps and divots that can be created between boards during an application. Because framing members might not be absolutely straight or level, boards can get dented or dinged, or board often must be cut to accommodate an installation condition in which edges and ends may not touch at every location along a joint. What does one do then?

While some of the gaps may be attributed to application issues, they can also occur because gypsum board is manufactured within an established width tolerance. Often called a “zero minus” tolerance, the ASTM C 1396 manufacturing standard mandates that board may not be wider than a specific dimension, a dimension that varies based on the intended width of the board, either 48 or 54 inches, but may be up to 3/32 of an inch under the specified width. In the case of gypsum board, the zero minus tolerance may create situations where board edges may not precisely line up along the entire length of a specific joint.

Acknowledging the manufacturing tolerance concept, application issues, and the text of the quoted statement, it is apparent that an acceptable application can incorporate a situation where the edges on two adjacent and undamaged boards in a rated system do not touch at every point along an entire joint. Small, reasonable gaps along the common edges or ends of boards are permissible when the boards are touching along the majority of the joint in question.

However, none of the language referenced is intended to condone a sloppy or forced application. A sheet of board installed in a rated system that does not touch another board along a specific edge, or somehow touches an adjacent board in only one isolated location along a specific edge due to crooked installation, won’t pass inspection. Neither will a board that has had the majority of an edge carved off, but still touches the adjacent board at two distant points.

As noted above in the opening paragraph, non-rated systems can be evaluated with a somewhat lesser degree of precision. Because the installation serves purposes beyond the aesthetic, it stands to reason that the joint tolerances in rated gypsum board systems need to be tighter than the joint tolerances in nonrated systems. In short, higher levels of expected performance require higher levels of precision in construction.

To accommodate some of the circumstances that might arise during installation, the Gypsum Association developed the following recommendations for gypsum board joints in nonrated systems.

Joints in nonrated systems are permitted to be up to 1/4 inch in width at the widest point and must be prefilled with joint treatment before being finished with tape and compound.

Joints up to 1/8 inch wide can be filled with drying-type or setting-type joint compound.

Joints greater than 1/8 inch and up to 1/4 inch wide must be filled with setting type joint compound.

The type of compound used to pre-fill gaps in the joints must be compatible with the compound and tape used to finish the wall or ceiling surface.

Again, less precision does not condone a poor application. Codes and application standards require board edges in nonrated applications to be in moderate contact. Large gaps between boards are not acceptable. If gaps between boards cannot be repaired by compliance with the preceding guidelines, then under-performing boards should be removed and replaced to eliminate oversized gaps and holes. W&C

What Do Fire Resistance Ratings Mean?

All Things Gypsum<br>You Say it's Your Birthday, it's Our Birthday Too

All Things Gypsum: Where is it in the Code?