Ever since I learned that fiber optic cables could be used for lighting, I have been fascinated with the idea that light could be brought anywhere into a building 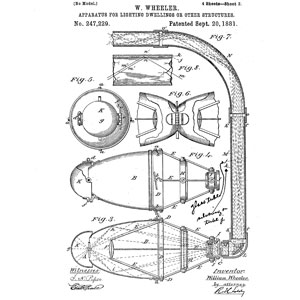 through tiny, plastic strands. I have been waiting patiently (for several years) to see a practical application of a optic fiber lighting system. None have been much more than accent lighting—twinkling stars on the ceiling, disco balls, and Christmas trees. Novelty lighting. I had all but given up on the idea that any manufacturer could come up with a way to employ the use of fiber optic cables to light the interior of a building. Until now.

About a week ago, a random email popped up in my inbox with the subject line “Parans | Bring the sun inside! The latest in daylighting technology.” (For more information, visit www.parans.com). The product showcased in the email was a promise that through the use of fiber optic cable technology, natural daylight could be brought into a building as light source comparable to any artificial light source. The system uses a special sun tracker with Fresnel lenses that are connected to special luminaires with fiber optic cabling. The system is built and sold in Sweden and now coming to market in the U.S.

The world was first introduced to the concept that light could be sent through a curving medium when scientists demonstrated the phenomena using water as the “cable” in the mid-1800s. In 1880, inventor William Wheeler introduced a system of hollow glass pipes with a highly reflective coating designed to light homes. He fed an intense electric light into one end of a pipe which was connected to many other pipes that directed light through the home. The invention was a failure but Wheeler believed that the generation of electric light in great intensity at one point is more economical than a lesser intensity at many points. And fiber optic lighting was born.

Fiber optic lighting has three basic ingredients; a light source, fiber optic cable, and a luminaire. Most available systems use an artificial light source—typically halogen and metal halide lamps specially designed for use in fiber optic lighting systems. Bulb life ranges anywhere from 50 hours to 10,000 hours. High intensity lamps aren’t particular energy efficient, and generate a large amount of heat—so cooling at the lighting source is a requirement (one manufacturer requires at least 50 cubic feet of free air per minute for each lamp and shows an image of a lamp that did not have this minimum air flow—burned to a crisp). Fiber optic cables come in many different sizes and varieties—some better suited than others for use in transmitting light used for illumination over distance. As light travels through the cables, the amount decreases between 3-5 percent per foot. Long cable runs mean less light at the point of illumination. Luminaires are what the cable connects to at the point of illumination, and can be floods, spots, or even bars. Lenses on the luminaires are designed to intensify the available light to make it brighter than what actually makes it through the cable. Quality and variation vary greatly among manufacturers.

Because high intensity lamps are relatively expensive, high energy consuming and because high quality fiber optic cable is expensive and does not work well in long runs, this lighting idea has been relegated to specialty uses in buildings. Parans thinks it has these problems solved. Instead of an artificial lighting source, the Parans system uses a solar collector what it calls a Solar Receiver. This important part of the system is a highly sophisticated, low-profile collector with a series of Fresnel lenses dropped into a motorized tracking assembly that points the lens array perfectly toward the sun throughout the day. The solar receiver can be mounted anywhere on the building (roof or façade).

The receiver is coupled to a six-cable bunch which are used to “power” six individual spot lights or rectilinear ceiling mounted fixtures. Cables come in lengths up to 25 meters, allowing fixtures to be installed deep within a building over several stories. With receivers exposed to direct sun in August in Seattle, each fixture can provide up to an incredible 350 lumens. Parans claims that even in overcast conditions, the tracker works by following the heat source, ensuring that the receiver is always positioned at the perfect angle to the sun for optimal daylight harvesting in all weather conditions.

So what’s the downside? One word: Cost. Each assembly, consisting of one receiver, six fiber optic cables and your choice of luminaires attached to the cables, costs a whopping $10,000 installed. You read that correctly. Ten thousand dollars. The U.S. distributor, Wasco, claims that this will be halved as soon as 4,500 units are sold in the U.S., because at that time, Parans will license Wasco to fabricate the system domestically, saving thousands over importing. Many of the big ticket components are actually made in the U.S. already—including the Fresnel lens array, the cables, and the solar tracking device. Still, at $5,000 a pop, there is virtually no payback for this system and not something that would make much sense from an energy savings standpoint. So I had to ask, “Who is buying these systems in the U.S.?”

I was told that there aren’t that many installed in the U.S. but one was in the home of a very wealthy, hip British airline company owner, a few more are installed in some posh condominiums in New York, N.Y., and the large majority have been sold to a U.S. university that is using them in an algae growing experiment/enterprise (100 have been installed by the university for this and 10 more are on the way).

Fiber optic lighting has come a long way since William Wheeler failed to wow the world with the idea in 1880. Wheeler’s idea was about 130 years ahead of its time; his theory proved to be correct. The improvements made since then have been incredible, with systems proven to work available now (for a small fortune.) Assuming that the price can eventually approach something closer to reasonable, I would expect to see many more of them incorporated into many more buildings. W&C

LED Lighting is the Future