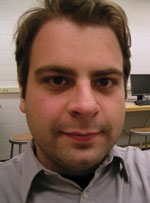 Working on an elaborate ceiling structure of the world’s tallest building in Dubai is no easy task, but get an insider’s personal experience on how it was accomplished in the upcoming Walls & Ceilings January feature “The Burj Khalifa Ceiling.”

In this exclusive interview, meet Neil Meredith who wrote, “The Burj Khalifa Ceiling,” and works in the New York office of Gehry Technologies as a consultant.

“There are a huge number of design decisions that are made after the construction documents are out the door, and the work we do at GT is trying to engage in that process as much as possible,” Meredith says.

The Burj Khalifa project was not only one of the most recent projects he’s worked on, but the most memorable as well. Meredith says many innovative approaches were taken to complete the project under such a tight deadline, and the company now plans on taking many of the working methods used for future projects.

W&C Architect: How many years do you have in the profession?

W&C Architect: What is your work history in this field?

Meredith: My early career was spent teaching and running the Digital Fab Lab at the University of Michigan College of Architecture and also working at M1, a design/build practice in Detroit. During this time, I benefited from learning about new digital tools and new ways of working, while still being engaged in real-world fabrication and material problems.

After that point, I took my career in a different direction: researching ceramic building materials for three months at the European Ceramic Workcentre (EKWC) in Holland. After I returned, I wanted to continue in the field of architecture, but avoid the traditional workflow of describing buildings through two-dimensional means. Coming out of school, I had a strong interest both in emerging digital tools and in methods for working directly with fabricators and builders outside of the traditional owner/architect/builder paradigm of professional roles and responsibilities. I’ve been working at Gehry Technologies off and on since 2007.

W&C Architect: Where did you go to school?

W&C Architect: Did you have a specialization?

Meredith: I majored in Architecture for both my undergraduate and graduate degrees at the University, but worked in New York for a painter and architect couple prior to starting graduate school back in Michigan.

W&C Architect: Do you approach architecture from an artistic or functional starting point? Are the two concepts exclusive?

Meredith: I work primarily as a consultant at Gehry Technologies, so we get to work with a range of designers with differing approaches to both design and aesthetics. We also do a lot of work directly with those involved in the rest of the building process as well: owners, construction managers, facilities managers, fabricators, installers, etc.

The work we do is definitely coming from a technical bent, but most of the people that are at GT come from a design background so we can understand the vision for a project and help to translate that design intent to all the various levels of the project. There are a huge number of design decisions that are made after the construction documents are out the door, and the work we do at GT is trying to engage in that process as much as possible.

W&C Architect: If any, who are your role models?

Meredith: I have my own preferences for buildings and architects that I like or admire, but professionally I most admire people that have managed to change a process or the way in which designs are created. Mostly these come from industries and processes outside of architecture, but they have enormous potential for architects to actually take on more responsibility in the design and construction process.

With its development of CATIA, Dassault Systemes created a new way of working with aerospace design data, directly in 3D space. This allowed the designers of those very complex projects to simultaneously work together in a precise and visual medium while eliminating the need for 2D drawn documentation. The field of architecture is only now catching up to some of these developments that began as high-end manufacturing techniques. Certainly there are big differences between waterproofing a roof and constructing an airplane wing for flight, but certain ways of working on a design does translate from one field to another and opens up new possibilities. The key is to embrace what makes architecture unique relative to manufacturing, namely a less sophisticated work force, cheaper materials, larger spans, and (particularly) permanence.

W&C Architect: What projects, other than your own work, do you find inspiring?

Meredith: Projects that in one way or another challenge material or spatial conventions. There are many ideas about what constitutes a space, a room, a door, and so on. Those ideas are being reinforced through the use of the BIM tools currently on the market. but there are infinite possibilities for structuring our physical environment, and projects that tend to get out of this “catalog” mindset, but still accomplish it with a logic or economy of means, really point to a new way of working.

W&C Architect: How many buildings have you designed?

Meredith: From start to finish as a solo designer, none. But working as we do in a collaborative field, I’ve been involved in some capacity or another on around 75 building projects.

W&C Architect: If you had to choose one to represent your work, what project would you choose?

Meredith: The Burj Khalifa ceiling project was a unique opportunity to build a complex ceiling, through digital means, on a very tight schedule. Many innovative approaches to the way the pieces were conceived, detailed, and constructed arose out of the pragmatic constraints of the materials and the schedule versus a more intellectual desire for digital process. That said, since completing that project, we have been looking to implement many of the working methods (3D review of fabrication level details, direct CNC fabrication from 3D geometry, etc.) on different project types.

W&C Architect: What are your guiding principles when designing a structure?

Meredith: Process is key, especially in the work we do which is not related to a signature aesthetic, scale, or building type. In every project we’ve been involved in, whether working with New York City agencies to simulate the construction planning sequence for the World Trade Center site, to resolving 1:1 details for a complex curtain wall assembly, our approach is the same: creating a singular shared model environment with tight control over project geometry, but with enough parametric structure to allow the design to change (as it always does) without having to recreate all the project documentation.

W&C Architect: If you could have any building to redesign—anywhere in the world—which would you like to address?

Meredith: In a way you are asking me what my least favorite building is, because if I was given the chance to redesign something like the Whitney Museum I wouldn’t try to change a thing. That said I would actually like to design something at a relatively small scale, like a grade school for example, and bring in some of the builders and fabricators I’ve had the opportunity to work with over the last few years very early in to the design process to come up with economical (and potentially repeatable systems) that do some visually interesting things with inexpensive materials.

W&C Architect: What types of products interest you?

Meredith: Modular systems that have families of interchangeable parts or details are really compelling because each system can be put together to create a unique assembly. We tend to work with unitized or factory-assembled materials a lot because we can control quality and workmanship better in a shop environment.

What types of products in the wall and ceiling industry really interest you?

Meredith: Modular rain-screen and enclosure products like Moeding. Also systems that do a good job of systematizing what are typically one-off design solutions to curtain wall products like Schuco.