Interpreting sustainability information is often like following the single thread of a Celtic Knot. You begin to accumulate and interpret information, but ultimately you finish back where you started.

It’s this way, in part, because the green code and standard development process is new. In contrast, the building code modification process, as onerous as it might be at times, incorporates a history of document interpretation that helps to identify flaws and oversights in text. Green documents don’t yet have a similar history. They are still in “shakeout” mode.

Green documents also are evolving fast in a public process where material manufacturers and standards creation organizations are jockeying for position. The competition between entities is brutal and unyielding. It reminds one of the Groucho Marx quote, “No one is completely unhappy at the failure of his best friend.” 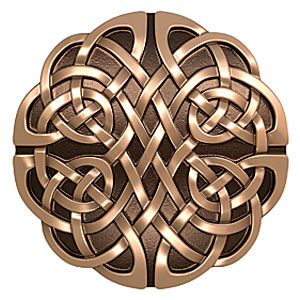 Both factors create an environment where appropriate benchmarks for material evaluation don’t always exist. In some instances, no reliable benchmark exists whatsoever. In other situations “legitimate” benchmarks exist, but they reference conflicting sources or contain inconsistent language. In either case, product evaluation becomes difficult, if not altogether impossible; the evaluation process begins to resemble a Celtic Knot.

In need of consistent information, many evaluators increasingly are turning toward the parties that they seemingly might trust the least—the manufacturers of the materials. Ironically, the scenario is working because manufacturers are banding together in a unique self-enforcing manner to create standardized evaluation documents that will answer the questions posed by the design and enforcement communities. That makes sense, because it is the manufacturers who have the specific expertise needed to create the benchmarks and it is the manufacturers who have the most to gain or lose if a benchmark is incorrect or difficult to interpret. The Gypsum Association (GA) is one of the entities that is creating documentation.

In an attempt to provide sustainability guidance for the gypsum board industry, the GA took on the task, using a third-party consultant, of creating product category rules for gypsum board. Product category rules, commonly referred to as a “PCR,” are the first step in a three-step process that is intended to provide a standardized set of documents for the evaluation of environmental and health impacts of building materials. It would be foolish to attempt to explain them better than other authors have already done in this magazine—I would suggest that you read some of W&C’s archived columns written by Chris Dixon for a fuller understanding of sustainability issues—But to give some context to this article accept the premise that a PCR is the base document that, according to Joann Gonchar in the December 2011 edition of Architectural Record, defines “the scope and methodology for Life Cycle Analysis (“LCA”) data collection for a given material.”

The LCA, again in the words of Gonchar is, “an in-depth, data-intensive evaluation of a product’s environmental impact from raw material extraction through manufacturing, transportation, and installation, and ultimately to disposal or recycling.”

With the PCR and the LCA complete, the GA can now focus on creating a generic Environmental Product Declaration for 5/8-inch-thick type X gypsum board. Again, this is being accomplished via a contract with a third-party provider. The EPD process takes the information contained in the LCA and passes it through a formal review process to create a document that identifies numerous environmental attributes for a given material.

An EPD reads like a nutrition label on a box of cereal. Rather than identifying fiber and protein content, the EPD for a building material identifies characteristics such as the energy used to create the product and its ozone depletion potential. In turn, these characteristics can be used to evaluate a material in two arenas: against identical materials within its own industry, and against other non-identical building materials that are used in the same application.

While it might seem that giving an industry the ability to make the document that will be used to verify its own claims about material characteristics is a less than scrupulous operation, that’s not the case. To be considered legitimate the PCR has to be created in accordance with a recognized set of third-party standards. In the instance of the GA PCR, the third-party standards are the ISO 14000 family of environmental management standards.

Compliance with the ISO standards mandated that the final version of the PCR had to be reviewed by an independent review panel that the GA could not choose. It also required that the technical committee established to create the draft PCR had to include individuals with a variety of backgrounds. The GA technical committee included representatives from the contracting, architectural and academic communities, as well as members of manufacturing industries other than the gypsum board industry.

A significant part of the PCR creation process involves conducting a literature scan to determine if a PCR exists that addresses the scope of the document to be created. The scan for the GA PCR revealed two European documents that addressed gypsum board. The first was a broad-scope Scandinavian document that contained general criteria for all board-type products, including plywood and other structural panels. The second document was a very thorough PCR that had been completed by the German Gypsum Association. Per ISO requirement, the authors of the GA document were required to acknowledge the existence of both documents and to use relevant content therefrom, or explain why the content was not incorporated into the new document. While much of the Scandinavian document was unusable because of its broad scope, the German document proved to be very helpful and the GA PCR incorporates quite a bit of its content.

In turn, any global party that attempts to create an ISO compliant PCR for gypsum board in the future will have to use the GA document as a reference moving forward. It is fair to say that concept was one of the factors that pushed the GA to create the PCR.

Gypsum board has many positive sustainable attributes, not the least of which is its potential high recycled content. The difficulty comes when you attempt to verify that attribute to a skeptical public that is being bombarded daily with environmental claims. Until the environment for green documents and standards stabilizes, the burden for creating the documentation to verify sustainable claims is going to rest largely on the shoulders of industry.

All Things Gypsum: Using a Gypsum Board Membrane System for Fire Resistance

All Things Gypsum: Shrinking Gypsum Board

All Things Gypsum: Attachment of Gypsum Board