Construction Stereotypes Are Getting Old

It shouldn’t surprise anyone that certain stereotypes exist. Construction workers do not have the best image in the public eye. Some people view the construction worker in a negative light and unfortunately they do not hold contractors in high regard either. We are thought of as generally lacking in education with no self-discipline. What is surprising is that the stereotypes do not stop there. While we have a strong craft, trades tend to look down upon others. If I had only heard one or two stories, I could dismiss them, but there seems to be a lot out there. I am not making these stories up, simply relaying them to point out what others tend to think of us. It is up to the individual to decide the validity of these rumors.

I was talking to another large national wall and ceiling contractor that did a variety of disciplines, including mechanical, electrical, glazing and other specialty trades. At a staff meeting with various departments, he offered some advice and it was immediately dismissed. Upon asking why, he was told that he was a second-tier sub. Second tier? He, like me, had never heard that before. After a few minutes of trying to explain why, the other department head pulled out a large technical manual and set it on the table. He said, “This is our industry and we have to know this, all of it. What do you have to learn?” The others chimed in and my friend gave up as they went on to point out what we do is not really challenging. 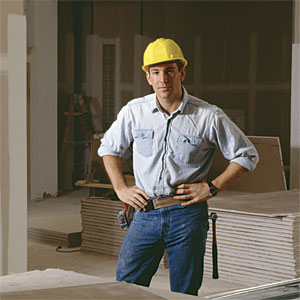 Change with the Times

I have experienced similar issues myself. At the architecture firm I worked at, I found myself overwhelmed and overloaded with technical items I had never before encountered. We had engineers on staff and trying to keep up at project meetings was tough but I hung in there. I learned a lot about science, engineering and physics. Then I came back to the drywall and plaster industry. It seemed my new found knowledge was either not needed or dismissed. I believe we have areas of untapped resources and allow ourselves to be taken advantage of as a matter of routine business. I tend to challenge the accepted norms of the industry. I try to tackle problems from a different angle and find many prefer what they know and resist change with every fiber of their being.

I believe this is why our image is so lacking. Even within our own industry, we fail to think outside the box of what we were taught. The construction industry is changing, like it or not. What worked for the last generation will not work for you in the future. The few who get it will find ways to survive, in spite of an industry resistant to change or think in a new direction. Our industry must change its image.

The old school private meetings and smoke-filled back rooms of yesteryear are over. We need to be more transparent, more technical and catch up to the other crafts. If we don’t, the picture of the drywall/plaster contractor will be forever cemented as an image of a buffoon in overalls whistling at girls as they walk by. Let’s as an industry try to move forward, think of the industry as a whole to move us as a group in a new direction and to be on an even playing field with the other crafts. Our future and our image are at stake.