For the second year, Walls & Ceilings and the FWCCA brought together several wall and ceiling contractors for an industry roundtable. Unlike previous roundtables that the magazine has done this gathering is unique in that it provides all the participants from a specific area, namely the state of Florida. With the help of the association’s Executive Director Janice Ficarrotto, this event gave wall and ceiling contractors the chance to discuss some of their respective successes, niche markets and issues they face in today’s (improving) business climate.

Over wing dings and drinks, the roundtable took place this summer at the Gaylord Palms Resort, in Kissimmee, Fla. The team represented six individuals from five different companies.

Mostly all commercial contractors, the companies ranged from having 25 employees to 1,000. The contractors all shared exterior plastering and steel framing as the prevalent trades, while a handful of the others also provide drywall, ceilings and insulation. 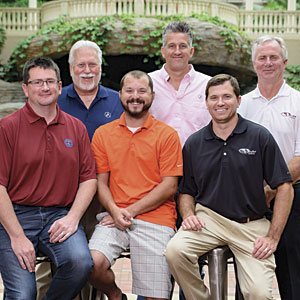 At the roundtable, contractors shared insight into what has been happening in the Sunshine State. Everyone was happy to report that Florida is back in a healthy construction boom. All parties stated that work had come back and that there was even a backlog that stretched into next year. Areas such as the Miami, Orlando and Tampa markets are all booming; the Panhandle is steady if not as strong as the three mentioned, but the Jacksonville-area appears to be not as strong as the rest of the state.

With all the good news these six contractors brought to the table the one issue that continues to linger is labor.

As of 2013, unemployment in Florida was reported to be at an all-time high. But when asked how this was impacting the subcontractors involved in the roundtable this year, a different response was altogether noted: The labor shortage.

Ten years ago, labor wasn’t an issue but undocumented workers were. Today, it seems opposite as many of those workers have moved on due to the shortage of work. So, all contractors (even extending beyond Florida) have been faced with how to fill and attract a new work force.

But is finding laborers the problem or is it finding knowledgeable, quality workers?

“Finding bodies isn’t an issue,” says Kyle Eckelbarger, estimator with KHS&S Contractors’ Orlando office. “Finding the ones who can produce quality work is. Sometimes in our industry that isn’t immediately apparent.”

Tom Thrift, CFO of Mader Southeast in Orlando also says likewise: “We haven’t had any issues of getting labor at this time. We haven’t capped out on our growth but when we do, labor will be an issue.”

Not everyone is so fortunate. Andersen Interior Contractors’ Scott Rollins, director of pre-construction, says that labor has been tougher to secure and that skilled labor is at an all-time low. “We are commonly asked to step in and supplement crews from other companies,” he says.

The company’s Alec Mason agrees that a qualified workforce is harder to obtain. “From bid time to contract, the labor costs go up and profits go down.”

In regards to the evolution of risk management, these contractors believe there is more at stake than ever before.

When asked if today’s contracting is more or less risk prone than in years past, Mason says: “There is more risk—few people, higher wages.”

Mader Southeast’s Eckelbarger says that risk hasn’t changed much over the years.

“There is always risk out there when you are doing [any kind of] business.”

According to DPR Construction’s Charles Wiggins, of all the risks a contractor must manage, tracking changes on a project is the highest. That is no wonder why the California-based contractor has embraced all types of jobsite management and design-build management. All contractors stated that they use On-Center Software’s On-Site program, an industry standard as they say.

In the closing words of Bondurant regarding risk, design-build “allows you to have more input on the design and constructability,” he says. “So yes, it could have a positive effect on risk.”

Overall, the news from all the contractors that joined this roundtable is positive. It only takes open eyes to see all the cranes in operation just outside Orlando International Airport (MCO)—a taste of what is yet to come for any of these contractors down the line. Yet, while Florida’s economy and construction activity continues to strengthen, obstacles such as labor and risk management could have an impact—whether positively or negatively—on today’s wall and ceiling contractors. And that rule extends outside of Florida as well.

KHS&S was founded in 1984 as a regional wall and ceiling contractor. In the mid-’90s, the company expanded westward to California and Nevada, beginning the company’s road to becoming one of the largest specialty contractors in the United States.

DPR’s team of estimators, managers, engineers, MEP specialists and self-perform craftspeople dissect each project in detail, offering inventive low-cost solutions for achieving better outcomes. The subcontractor began in 1990 and has since grown to have a reach throughout the United States. The company has been a major advocate for technology and prides itself in the utilization of BIM and other virtual building and sustainable construction with accredited LEED professionals. Since 1997, the company has continued to rank in the top 50 general contractors in the country. In 2013, it reached $2.5 billion.

Started in 1986, Andersen Interior Contracting, by design has a narrower focus, primarily in the carpentry trades. In 1989, a separate company, Corporate Woodworking, with a focus on high-end architectural woodworking, was formed, and today it ranks as one of the Northeast’s premier woodworking companies.

The Andersen Companies maintain office staffs in four locations totaling more than 35 people, and employs field crews of between 200-400 employees. Operations are located in Fairfield, N.J., and in its three satellite office/warehouse facilities in Palmetto, Ocala and Orlando.

Review of Walls and Ceilings Plaster and Drywall Roundtable