HOW GA’S INTRODUCTION OF VIDEO TUTORIALS HAS FURTHER EDUCATED THE GYPSUM INDUSTRY.

When I joined the Gypsum Association in 2017, I had more than a decade in sales and service of construction materials and products. I have worked for large international companies, such as Home Depot and Lafarge, and I have worked for local companies in the construction industry. I also ran my own one-man residential repair and renovation company. Throughout my first year on the job at GA, I realized the importance of industry standards as a mean of ensuring people receive quality solutions as well as quality products. Industry standards are incredibly valuable because they are developed over time by seasoned professionals and are consistently reviewed for relevance.

Early on, I began to hear that educating new staff about important and helpful industry standards was a challenge for both code jurisdictions and architecture firms. Similarly, project managers can’t always use a document to communicate what is necessary on the jobsite. People working in the field under time pressures may not have the patience to tackle pages of technical language—they want to know what things look like and how they go together. That said, project managers are ultimately responsible for ensuring that technical standards are followed.

As I tracked frequently asked questions, noted who was calling, and where callers fit into the multi-faceted design and construction industry, I increasingly came to believe we needed to bring some of our publications to life with enhanced visual learning. A few short videos could provide a much needed educational service, especially when it comes to some of our longer documents. It is one thing to tell a new hire at an architectural firm to sit down and read the first 40 pages of GA-600 Fire Resistance and Sound Control Design Manual, and quite another to ask them to watch a short video outlining the content of those pages and explaining how that content can save them time and aggravation when attempting to locate a code-compliant system for fire-rated construction. I envisioned a primer to GA-600 that would create general familiarity with the print manual.

When the GA met with the president of a contractor organization who called the GA-600 “One of the best kept secrets in the design and construction industry,” I had no difficulty convincing my colleagues that we needed to branch out into short video supplements to some publications. Believe me, we don’t produce a 400 page book by a committee of dedicated industry experts every three years because we want to keep it to ourselves.

Additional videos, again inspired by the types of calls and inquiries the GA receives, followed. In these instances, however, a different approach was needed. To explain the proper repair of a fire-rated wall, as detailed in GA-225-2019 Repair of Fire-Rated Gypsum Panel Product Systems, I recognized that an animated video was necessary. That document itself, which explains how to repair a damaged wall and maintain the assembly’s fire rating, became the script for this production—just as the organizational framework of GA-600-2018 became the outline for the video. All GA video productions are based on, and intended as, supplements to specific GA publications.

This essential relationship between video production and technical documents is very important. We never deviate from the publication—ever. Our goal is bringing vetted technical information to the small screen. The value of all GA publications is intimately tied to the group of industry professionals who develop them. These member company representatives have a combined technical experience numbering, not in decades, but in hundreds of years.

My challenge is taking a technical subject, which admittedly can be dry, and make something that holds the viewers interest. I’m not shooting an action film, after all. At the same time, the pivot to animation for our next few productions was key. Animation helps maintain interest, especially beyond the all-important two-minute mark when attention naturally starts to drift. People stay engaged because they want to see how all the components come together to restore the small hole or the full scale wall.

Clocking in at 3 minutes and 32 seconds, the video supplement to GA-225-2019 Repair of Fire-Rated Gypsum Panel Product Systems literally animates the document, taking the viewer step by step through the process of small and more significant repairs. Since it was posted in early April of last year, Repair of Fire-Rated Gypsum Panel Product Systems, has been viewed 3,487 times to date. Shortly after its release, UL contacted me to ask if that video could be used as an aid in their internal and external training. Of course the answer was a resounding "yes."

Our most recent video production focuses on GA-620 Gypsum Area Separation Firewalls, an 11-page technical document that expands on information provided in GA-600 Fire Resistance and Sound Control Manual. These non-load bearing walls are specifically designed to be 2-hour walls separating townhouses and areas in various occupancies. In addition to providing fire resistance, these increasingly popular systems are great for reducing sound transmission between adjacent occupancies.

The video supplement to GA-620 is intended to serve as an introduction to these systems, not a replacement for the document itself. For example, GA-620-2019 Gypsum Area Separation Firewalls contains important additional information on air sealing that is not covered in the video tutorial. A reference to the fact that the document is available as a free download on gypsum.org underscores the importance of reviewing the document itself.

In this case, the video supplement distills the construction methods used to create area separation firewalls. In place of construction drawings, animation provides a basic overview of how these walls are built. It is not a detailed animation of the construction sequence. Many of the methods and materials used are shown and referenced but not thoroughly examined.

Instead, the video illustrates why area separation firewalls are described in GA-620 as “designed to be fast and economical to install.” Animation allows viewers to see how panels are installed one course (or floor) at a time, just like the rest of the building. Watching the video, it is easy to understand why these large panels accelerate construction and can be installed by trades already on the job. In fact, the video is so visually rich we realized that additional foreign language versions are unnecessary. So far, the GA-620 video supplement has been viewed more than 400 time since it was posted in mid-June and is on track to catch a few thousand sets of eyes within two years of release—in line with the other videos we have released. 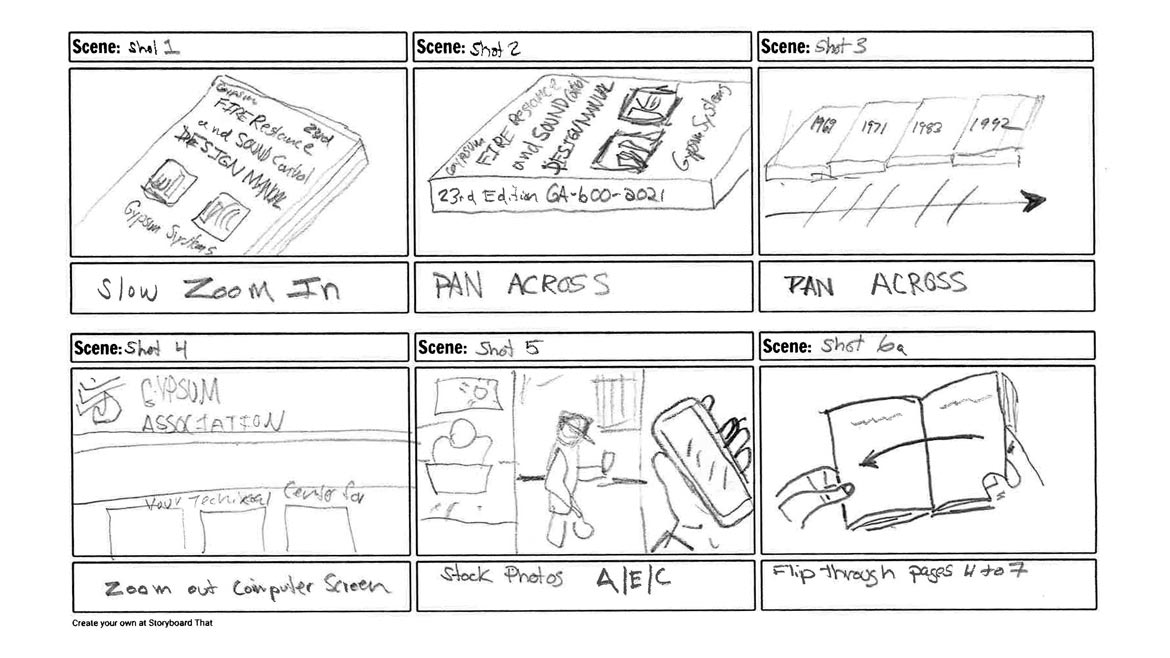 Clear and descriptive storyboards, like the one above, facilitate communication among the team assigned to video production. Photo courtesy of the Gypsum Association.

Another valuable aspect of GA video tutorials is the fact that they lead people to our other technical publications. For example, GA-620-2019 Gypsum Area Separation Firewalls cites both that document and GA-801-2017 Handling and Storage of Gypsum Panel Products informs people that they are available as free downloads on our website.

Currently, I’m knee-deep in creating A Guide to GA-600-2021 Fire Resistance and Sound Control Manual. Because I hold a degree in film from New York University and spent a decade in Hollywood working on set design and construction, I’m trained in the necessary process. Even though I’m decades past school at this point, I know that I have to follow that process and not take shortcuts—much like construction. So I take the publication and break it down to find a “story” we can tell on the small screen, as opposed to listing the standards and rules. Parallel with that step, I build a script that is vetted by the GA’s Director of Codes, Standards and Research. When the script is approved, I will make a storyboard that is about 10 to 15 shots and that becomes a template for the videographer and editor.

As with construction, communication between and among the crew—videographer or animator, editor, and producer/director is key. That’s why the story boards are so important. Clear and descriptive storyboards share not just the vision but also important details. In the case of the next GA-600 Guide tutorial, that is especially important because we are using video. Continuity is incredibly important. If your story jumps around or if the lighting changes significantly between shots viewers will find it distracting and that interferes with the learning experience. You certainly don’t want your audience wondering “what were these people thinking?” If that happens viewers can’t focus on the voice over or the visuals.

Inevitably, the struggle is paring it down, making certain that every shot serves a purpose. A less-than ten-minute runtime is ideal. That is harder to achieve when attempting to guide viewers through even the first 40 pages of the manual. Frankly, I’m not sure I can achieve that goal, but I will get as close to the mark as possible. Avoiding extremely lengthy videos is very important these days. With the evolution of handheld devices, the world is moving toward ever shorter videos, even for commercials. It’s obvious that if advertisers don’t capture attention within the first five seconds, viewers will be distracted.

Even for the longer guide tutorials, however, once word spreads about GA videos whether through our website, LinkedIn, or a convention during which I introduce people to our video library, people take note and pass the word around. Code officials, architects, construction professional—really everyone— wants to help their co-workers. GA videos provide people in the design and construction value chain with something helpful to share with others.

College-age Greg may have been shocked to learn that one day he would use his film school skills to educate about gypsum panels. Still, I hope he would have recognized, even at that tender age, that everybody enjoys helping somebody else. Check out our videos on gypsum.org and YouTube and make sure to subscribe to the Gypsum Association YouTube channel. That way you will never miss a new release and you will have another resource to share with your colleagues.

Technical and Market Advisor Greg Woolley joined the Gypsum Association in 2017, bringing more than 15 years of experience in building products and building product services. In his current role, Woolley addresses technical questions received via phone and email, plays an integral role in publications development, and enhances gypsum industry representation within technical and consensus organizations. He is a graduate of New York University.