After modifying a building to create the first LemonTree location in 2007, the goal for the second location was to build it right from the ground up. Erik Nilsson, LemonTree owner, chose sound reducing drywall to provide the sound isolation he needed to achieve.

With large studios closing and band rehearsal studios not conducive for recording, LemonTree Studios in Los Angeles, was at the forefront of providing an affordable solution for musicians who needed a professional recording space.

“I knew that I was one of many producing musicians in Los Angeles that had his own recording gear, so dividing up a building into multiple sound-treated spaces that are small enough to be affordable, yet still professional was the solution," says LemonTree founder Erik Nilsson. "LemonTree’s BYOGear audio production lockouts are an inspiration and a cradle for musical creativity. As for the name, it’s fresh, it’s tart, it’s oh-so California. And for fans of a certain sitcom about nothing, Tippy Toe just didn’t sound as good.”

With the new flagship LemonTree Studios location in the Highland Park area of Los Angeles, Nilsson wanted studios that were acoustically designed and built with independent double-wall framing, meaning all walls and the ceiling do not touch any other studio. He also wanted the sound transfer between rooms to be practically non-existent. 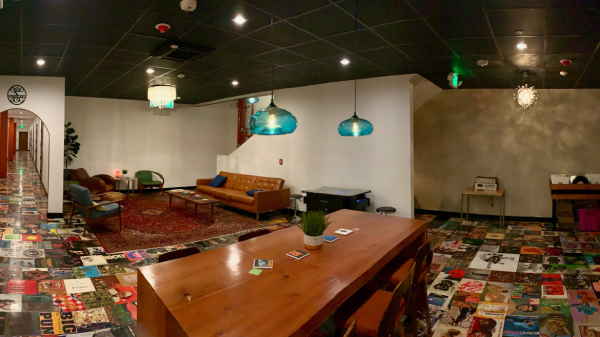 Nilsson chose to build his studio walls and ceilings with 1-3/8-inch QuietRock 545 because it is a well-known and reliable product on the market for this type of project. This product is a multi-layer gypsum panel engineered to provide maximum sound attenuation (STC-rated assemblies performing at the 60-80 STC level) across a broad frequency range. The product was installed on every wall and ceiling throughout the studio.

Beyond the product itself, it was all hands-on deck from PABCO Gypsum. The company’s acoustical team reviewed the project and presented design options to guide Erik during construction.

“Everyone was helpful, proactive and straightforward,” says Nilsson. “The manufacturer’s technical experts came out and educated the installers and tested the product. Our sales rep worked extremely hard. It was a fantastic experience.”

“We worked with Erik to build the best possible walls given the constraints of the historic building,” says Rob Krug, QuietRock territory sales manager.

LemonTree is now built out and ready for professional tenants sporting a recording studio with 12 separate quiet studios where music producers of all genres can work uninterrupted by sound from adjoining rooms.

In addition, LemonTree was selected by PMC to house its state-of-the-art Dolby Atmos studio in L.A., one of only a handful of such studios in the world. PMC, known for its supreme speakers which are used throughout leading mastering houses, broadcasters and much of the professional world, selected LemonTree due to the quality of construction and materials used.

PMC’s studio will act as a community center and creative hub for artists, music makers and recording professionals.

“The full Dolby Atmos set up in our L.A. studio reflects our strategic partnership with Dolby and Universal Music Group, bringing the Atmos immersive format closer to the music production market,” says Maurice Patist, president, PMC, USA. “The studio exists of an LCR (Left-Center-Right) of MB3-XBD-A monitoring, two Sub.2 for LFE (low frequency effects) channels and a selection of our Wafer on-wall monitors for all the surround and height channels, similar to the systems already installed at Capitol Studios.”

As a finishing touch, Anthony Verdugo, owner, Critical Mass and finishing contractor for LemonTree, raved about the finishing work with QuietRock 545.

“Aside from its outstanding performance, the greatest benefit was the convenience of the steel sheet below the first layer," he says. "The steel behaves like an anchor, allowing us to make both minimal and shallow fastener penetrations to support and anchor interior, non-load bearing, framing for insulation and fabric.”

In acoustic applications, minimizing penetrations, especially penetrating all the way through to the drywall, directly affects acoustic performance, according to Verdugo.