In its sixth year, ATAS International once again sponsored the Greater Lehigh Valley Let’s Build Construction Camp for Girls. On June 23rd, Kevin Klersy, CAD Draftsman for ATAS, spent the afternoon with the campers, demonstrating the installation of standing seam metal roof panels, along with metal shingles. This gave the campers the opportunity to apply a peel and stick ice and water shield underlayment to the roof deck and measure the deck to determine the lengths of the trims that needed to be cut. They had hands-on experience with cutting the metal with snips and driving fasteners to secure the panels and trims. The campers also learned about the differences between steel and aluminum metal roofing.

The Greater Lehigh Valley Let’s Build Construction Camp for Girls is the result of a collaborative effort between the Construction Specifications Institute Greater Lehigh Valley Chapter and the Associated Builders and Contractors Eastern Pennsylvania Chapter. It is a free week-long camp designed for middle and high school-age girls to explore the construction trades, architecture, engineering and construction materials manufacturing through hands-on experiences and field trips. The camp was held at ABC’s facility in Allentown, Pennsylvania, during the week of June 20th. 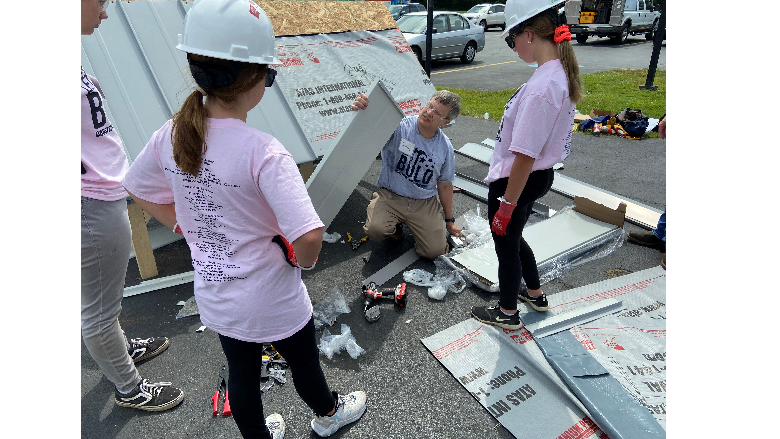 This year, a new camp began in northeast Ohio. Phil Dorenkott, ATAS product representative for western Pennsylvania and eastern Ohio, attended the camp to demonstrate the installation of metal roofing to those campers. This new camp was held at the Mahoning County Career & Technical Center in Canfield, Ohio, during the week of June 27th.

ATAS is proud to have been involved with the Greater Lehigh Camp since its inception. They have supported the camp with sponsorship, materials and volunteer time, which are all important to achieve a successful camp experience for the girls and the volunteer staff. During camps held in previous years, the campers have toured ATAS’ headquarters in Allentown, Pennsylvania, and witnessed metal panels for roofing and wall cladding being manufactured. During one of the camps, the campers built a shed with a metal roof and collapsible metal awning as a fundraiser for Habitat for Humanity. Over the week each year, these young women experience growth in not only their skills, but also in their confidence, realizing they are capable of achieving a fulfilling career as a building industry professional.

“ATAS was pleased to be involved in the camp this year, as we have been since its inception,” said Lee Ann M. Slattery, Sales Support Manager for ATAS, who has been involved in the planning of the Greater Lehigh Valley camp for the past six years. “It’s exciting to see other CSI chapters forming their own local Let’s Build camps, and we expect more to develop across the country in the coming years. ATAS is a strong supporter of the development and training of students within the local community. This camp is a great opportunity to expose these middle and high school-age girls to potential careers in architecture, construction and manufacturing. With workforce development being a concern for many local employers within these industries, events like this camp are important for our future as a manufacturer within the building materials industry and the future of others involved in design and construction.”

In 2021, the CSI Foundation adopted the efforts of the Let’s Build Construction Camp for girls and are encouraging 127 CSI chapters nationwide to offer the camps as a way to recruit women to the profession. They offer licenses and seed money to chapters to get the new camps started, along with a camp guidebook. The CSI Foundation is a 501(c)(3) tax-exempt organization that supports research, education and scholarships related to the built environment and in alignment with the goals and objectives of CSI.

Architectural Glass Boot Camp - Only A Few Spots Left for the 2018 Round of Boot Camps!