We are fond of imposing broad, sweeping technical rules in the gypsum industry. 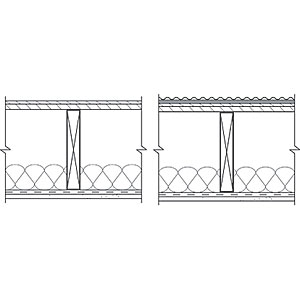 “Build it as it was designed in the fire test” is one of our favorite maxims. “Finish all the joints to a minimum Level 1 finish” is another.

So it can create some hypertension when we mandate slight modifications to fundamental application rules. Such is the situation with the requirement that requires the application of an additional layer of gypsum board when glass fiber insulation is added to a ceiling.

General Explanatory Note 12 in the 20th edition of the Fire Resistance Design Manual, GA-600 reads, in partial paraphrase, as follows:

“In floor-ceiling or roof-ceiling systems, the addition or deletion of mineral or glass fiber insulation in ceiling joint spaces could possibly reduce the fire-resistance rating. The addition … of glass fiber insulation … to any 1- or 2-hour fire resistance rated … system having a cavity deep enough to accept the insulation is permitted provided that one additional layer of either 1/2-inch type X or 5/8 inch type X gypsum board is applied to the ceiling.”

Note 12 was first included in the 16th edition of GA-600, published in 2000. With slight modification, and an occasional renumbering for format, it has appeared in each subsequent edition of the manual.

In non-technical terms, the language says this: If the system was fire-tested with insulation and the application is fully compliant with the listing, no additional gypsum board beyond that described in the test needs to be installed. But, if insulation is added to or deleted from a tested ceiling system, you must account for the potentially deleterious effect of the added or removed material. And in many instances, this will require the addition of an extra layer of gypsum board to maintain the fire rating.

Having to add the board is where the boil often begins. “What?” says an astonished contractor or architect, “you spend all this time telling me to build it as tested, and then you tell me that’s not enough? That’s an outrage! Who says I have to add the board?”

Trust us, no one makes this type of stuff because of boredom; it’s not in the best interest of the industry to create restrictive rules. But when lab results indicate the need for a change in approach, we are obligated to comply with science and the limitations of building materials. Such is the instance with the creation of the language in General Explanatory Note 12.

The basis of Note 12 comes from testing conducted in the 1990s by the National Research Council Canada, the Government of Canada’s premier organization for research and development. The NRCC reports to Parliament through the Minister of Industry and is governed by a council of appointees drawn from its client community. The Gypsum Association was a member of the 1990s test consortium and provided technical and funding assistance for the program.

The Gypsum Association has a long history of working with the NRCC and is presently a participant in a NRCC sound program. We commonly use NRCC research to address gypsum board issues. The NRCC is a world class research facility with a long history. It’s not a fly-by-night operation that was born last month in a Nova Scotia garage.

The intent of the NRCC test program was to determine, in part, the net effect of variations in subfloor materials, framing materials, fastener spacing and attachment and insulation types on floor-ceiling system fire-resistance. By repeat testing of a template system, researchers were able to determine the effect of minor variations in system construction.

The results obtained when glass fiber insulation was added to a system were attention-grabbing. The testing showed that the heat rise on the side of the board hidden from view—i.e., the side with the insulation resting on it—on a glass fiber insulated system faced with gypsum board was greater than the heat rise on a similar system constructed without insulation. According to one test report, “[t]his (the insulation) caused the board to calcine faster and fail earlier than in the non-insulated assembly. The glass fibre (sic.) melted 2 to 3 min after the gypsum board fell off and was unable to compensate for the earlier failure of the gypsum board.” In simple terms, adding the insulation cooked the board from both sides and made it more vulnerable to failure. In every instance, the addition of glass fiber insulation reduced the fire-resistance of the system, in some cases by almost 20 percent.

In addition, testing also confirmed the fairly obvious concept that adding layers of gypsum board to a wood-frame system improved its fire-resistance. In every instance, the additional layer of board increased the fire-resistance of the system by more than 70 percent. Steel-frame systems were not comparatively tested in the same manner.

So, while the addition of glass fiber insulation had a negative impact on the fire-resistance of a rated system, adding a layer of gypsum board had a positive effect on a system. Taken together, the two seemingly disparate concepts provide the Association with the opportunity to craft language that secures the ability to use traditional floor-ceiling systems while allowing them to incorporate glass fiber insulation to meet energy and sound mandates.

Some might say that rules are made to be broken. In the gypsum industry, we like to say that rules are made to be broken only when the supporting science says that it is allowable. In the instance described, changing the requirement from “build as tested” to “build as tested a bit more” creates flexible options that would not be available under standard practice. While the requirement to add a layer of board might create a situation that is onerous for an applicator, ignoring the impact of a system modification could create a situation where a system does not perform as originally tested. In such a scenario, the negative implication of the modification cannot be overlooked and the system has to be modified accordingly. W&C

Michael Gardner is the president of M Gardner Services LLC, a consulting firm that assists organizations with issues involving industry standards and building codes, meeting management, and external collaboration and outreach. Prior to establishing MGS, he was the executive vice president of Compliance Programs for the International Code Council. He is also the former CEO of the Gypsum Association, currently serves as a special technical advisor to the Wall & Ceiling Alliance and can be reached at michael@mgardnerservices.com.
You must login or register in order to post a comment.