How much has changed in the industry over the last 75 years?

Browsing through past copies of the magazine that was to become W&C, this author finds that the industry’s good ‘ol days weren’t always so good.

According to industry statistics, about 50 percent of new businesses fail within the first four years and about 75 percent fail within the first ten years. While the rates may differ slightly from various industries, construction is one of the highest in failure rate percentages. This makes the 75-year anniversary even more special for us at Walls & Ceilings with a drive to keep the tradition going, moving forward and last, another stretch of several decades.

I am fortunate to work in an office where we have the archives. I was curious as to what the wall and ceiling industry was like in the year when Northwest Plastering (the magazine that became W&C) was a fledgling local publication in Seattle. The magazines at my disposal were strictly for lathing and plastering, and seemed to be predominantly focused on interior gypsum plastering in 1938. I suspect that was because interior plastering was the dominant interior finish of the time. 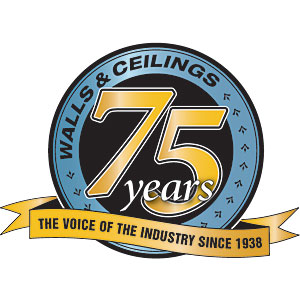 We may reflect about the good old days but the articles from 1938 were anything but positive and happy. Contractors were fighting high wages, poor production, excessive competition; dealers and manufacturers were having similar issues on price wars. As I read stories, articles and submitted comments, it was as if nothing had really changed in our industry. The same issues we have today, they had back then. There were articles about the Fair Labor Standards Act and questions on how we would survive this new law.

EACH DECADE BRINGS A NEW TASTE

I scanned the magazines through various decades and found each era had a unique flavor. The late 1950s was fascinating, as I could recognize a few of the names of real old timers scattered around the publication. I also noticed lots of pictures with plasterers spraying “hardwall” with the new machine called the plaster pump. This pump was new, exciting and promised to increase production by leaps and bounds. Another common ad is for air compressed staple guns used to increase efficiency over hand nailing lath. While it was certainly apparent the era of new machines would revolutionize the industry, not all made it. For example, there were ads for a few others like the “Power Trowel,” an electronic trowel for finishing interior plastering. I have never seen this tool, it obviously never panned out. Looking through those years, it seemed every inventor was trying to take some machine to new levels. It was the craze of the modern times.

By the late 1960s, screw guns ads started to appear in the magazine. They looked heavy and not very productive but over time the refinements kept coming and no carpenter or drywall hanger could live without one. I also noticed an increase in stories on cracked exterior stucco.

Stories on cracks were present in previous decades but by the late-’60s, cement plaster was the focus. I suspect it was because cement plaster/stucco had become popular and with interior plastering being supplanted with the more flexible and crack resistant gypsum wallboard, there was renewed attention to the cement stucco.

By the 1970s, a new material from Europe hit the market. I even remember seeing ads about EIFS (though I can’t recall if it was labeled as such then) but I do remember the foam with a thin, flexible fiberglass shell. I had never seen that and was curious. The start was slow but the energy crisis gave them a kickstart, along with one-coat stucco.

After 75 years, the changes in our industry are mind-boggling; though none to me are as impressive as the fact that W&C was there for all of it—reporting on it, shaping the future and recording the past. I am proud to be a part of this industry, part of the magazine’s family that will be there for the next generation and hopefully the one after that. Our sons and daughters need us to be good stewards of the industry, protecting quality work, guiding architects and builders on the right path, helping contractors be profitable and more.

Congratulations to W&C for its 75th anniversary. In this issue, you'll see that some advertisers opted to revisit old ads, which further emphasizes a theme in this issue of “then” and “now.” Also appropriate for this issue, our Art Director James Hohner has redesigned the magazine. Although all of the editorial has been reformatted and updated, we wanted to retain the “classic” look of the magazine. We hope you like it.

Walls and Ceilings Celebrates 75 Years of Lath and Plaster

The Strong Walls and Ceilings Contractor

Back to the Future: Walls and Ceilings Timeline

Up Front: A Change of View