Roger Kreps Drywall & Plastering Co. works on a geometrical-inspired ceiling for a high school in Cleveland.

“More than 25 years in the business and this particular install was one of the most challenging we’ve worked on,” says founder and CEO Roger Kreps, “and almost as rewarding as my first-ever commercial project.” Kreps got his start in drywall at the age of 12—laboring for the family’s residential plastering business. In 1984, he left a teaching career to start his business.

This just isn’t any old acoustical ceiling; this one consists of a geometric-inspired pattern that required more than 2,000 tiles to cover 8,000-square-feet.

Before renovations—also done by Kreps’s team—the space had a very industrial feel to it. “It’s two-stories and very open from floor to ceiling, so it felt very cold, sterile,” Kreps says.

The ceiling design, by the Cleveland office of Stantec, was purposeful, not only to warm the space from above, but to conceal existing mechanicals—electrical and duct work—and  control the reverberation of sound throughout. 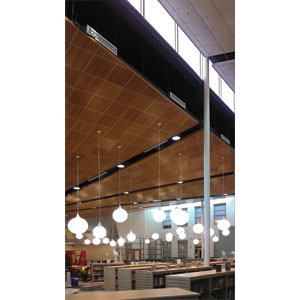 “It required months of planning to get the ceiling just right,” says Kreps, referring mainly to the arrangement of each trapezoidal shape that would run along the existing structural pattern of the ceiling/roof, which was not altered in the renovation. “We worked in tandem with Stantec.”

Stantec’s team is involved in most projects from conceptualization, to design and layout, to scheduling, materials management and then on-site construction.

The challenge with this particular design is that each of the 24 trapezoids is a different shape and size and angled just-so, requiring all to be spaced apart perfectly at just the right angle or all would be off. With final drawings in-hand from Stantec, it was Kreps’ turn.

Matching 4-inch cherry trim in a clear satin finish was the final touch.

Roughly eight weeks later and what was a challenge to all parties involved was complete. Kreps described it as “a very proud moment.”

Out With The Old, In With The New

In addition to the media center and library work, Kreps was hired to rebuild old walls with new metal stud framing and drywall in classrooms and locker rooms, and replace former ceilings with acoustical versions where needed.

“We did some patchwork to existing plaster walls as well,” Kreps says. In all, fresh paint was applied throughout, and new flooring.

The school’s renovation was part of a $32 million project funded by a $42.9 million bond issue that voters passed in 2010. Work began the summer of 2012, and included the renovation of approximately 95,000-square-feet of space.

“I’m certain it was our extensive experience in education that secured our bid with the school board,” says Kreps. The Rocky River High School project alone was a $1.7 million win for the Youngstown-based company; although Kreps’ projects extend well beyond Youngstown, and into Cleveland, Akron/Canton, Western Pa. and Pittsburgh, Southern Ohio and W. Va.

In the company’s portfolio is renovation work at Lorain Community College in Lorain, Ohio, Boardman High School in Boardman, Ohio, Theil College in Greenville, Pa., and Youngstown State University, in Youngstown, Ohio, amongst others institutions in the tri-state area. Industry experience spans beyond education to include retail and shopping centers, office suites and complexes, healthcare systems and financial institutions.

In Rocky River, students went back to school on August 27, 2013. Only a few of Kreps’ crew members remained on-site as the project was nearing completion.

Kimberly Clark is a public relations consultant representing Roger Kreps Drywall & Plastering Co. She has more than 15 years experience writing stories on behalf of companies in various industries, and developing content cross-channel. She can be reached at kimberly.clark@email.com.
You must login or register in order to post a comment.