The Union League Boys & Girls Clubs completed the first major upgrade in 90 years on its historic Club One facility in Chicago’s Pilsen Neighborhood. This multi-phased $4.2 million renovation and expansion nearly doubled the facility’s original size and showcases ROCKFON Impact ceiling panels. These high-impact, stone wool acoustic ceiling panels are in use throughout Europe, but had not been introduced to the U.S. prior to 2013.

ROCKFON’s team provided multiple ceiling suspension systems, panels and perimeter trim to accommodate the varying purposes of Club One’s new and renovated classrooms, offices, lobbies, corridors and activities areas. The most challenging applications were in the gymnasia. For these areas, ROCKFON products were provided to create a durable ceiling system that maintains a clean appearance, offers exceptional acoustic performance and withstands regular impact from errant balls and other daily athletic activities.

ROCKFON’s panels integrate with Chicago Metallic’s suspension systems and Rockfon InfinityZ Razor Edge Perimeter Trim to give its ceiling the appearance of being zero-depth. 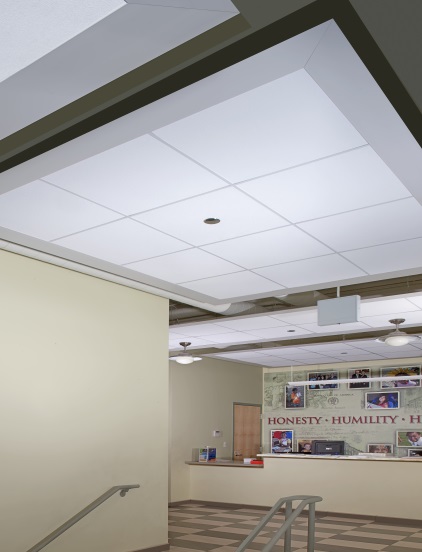 “This combination of panels helped create a very durable ceiling, which is acoustically tuned enough to allow the space to double as an auditorium,” explains Cory Nevins, ROCKFON’s director of marketing for North America.

“The ROCKFON system was exactly what was needed for the Union League’s gymnasium. Without [their team], we wouldn’t have even known about it,” shares Antunovich Associates’ project architect, Clark Christensen. “[They] went above and beyond to provide the best solution… It’s a robust system with a high missile-impact rating so we know it can stand up to balls hitting it. When necessary, the panels can be replaced easily.”

Tandem Construction’s project superintendent, Brian Curtin, adds, “Installing the very first high-impact grid in the U.S. has been a great experience and a neat thing to be a part of.”

Tandem also is credited with creating a dynamic project plan and construction timeline that minimized disruption to Club programming. The first phase in Union League Boys & Girls Clubs’ 19-month project began with the construction of a new four-story, 17,000-square-foot annex adjacent to the main structure. The second phase required a total renovation of the existing 18,000-square-foot facility. Walls between the original and new buildings were opened to connect all four floors.

“Between the new annex and the renovated original structure, we [have] a fully functional, accessible and ADA-compliant building to continue our service of being a beacon of light and a place of refuge for the youth of Pilsen where we’ve been changing lives and building futures for thousands of young people for more than nine decades,” stated Michael Chioros, a trustee with the Union League Boys & Girls Club and chair of the renovation project.

Christensen summarizes, “This project was about helping others, about rolling up our sleeves and contributing to a worthwhile client. It was really a team effort and a prime example of the whole being greater than the sum of its parts.”