As the final part of a two-year building restoration project, the landmark 40-foot tall clock tower atop the Jackson County Truman Courthouse in Independence, Mo. was brought back to life in September of 2013. Thanks to custom-designed pieces from Fypon and the expertise of Pishny Restoration Services, the clock now chimes again. 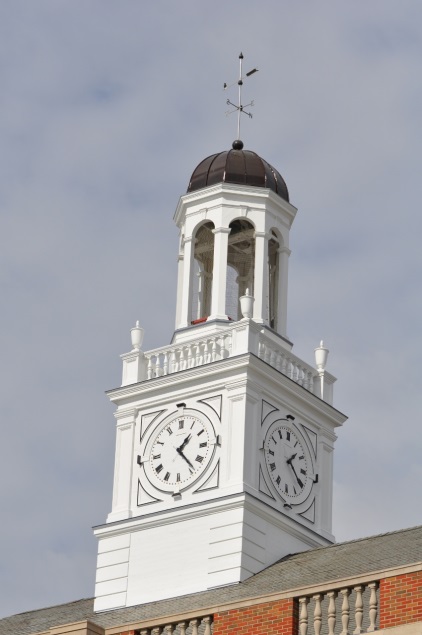 “We needed high-density polyurethane custom-manufactured materials like balustrades and finials to exactly match the historic profile of the original clock,” says Corey Thomas, vice president of business development for Pishny Restoration Services in Lenexa, Kan. “The Fypon products we received were an exact match to the samples we sent and offer a new, long life to the clock tower.”

Constructed in 1836, the courthouse underwent renovations and additions in 1848, 1873, 1887 and 1907—each one changing the clock tower and altering its design. The last renovation took place in 1933 and was presided over by Judge Harry S. Truman, who later became the 33rd President of the United States.

At the request of the Jackson County officials, and with so much history to preserve, the designers at lead consulting firm Piper-Wind Architects Inc., out of Kansas City, Mo. made the decision to use polyurethane products to accurately replicate the 12-foot square clock tower.

“High-density polyurethane resists many weather conditions, insects, rot and decay,” says Christopher Martin, AIA, who directed the construction period services for the firm. “The low-maintenance product is ideal for this setting that has 24-hour exposure to the elements.”

Eight months passed from the time Fypon was initially contacted to create the custom mouldings, balustrades, keystones, urns, appliqués and trim pieces needed to replicate the clock tower until the complex job was finished by Pishny Restoration Services.

“Trim elements around the clock tower were previously made of wood, which had deteriorated over time due to moisture and limited access for maintenance,” says Martin. “The high-density polyurethane accurately matches the appearance of the original exterior wood trim details while providing a material that is weather resistance with low maintenance needs.

“Overall, we were pleased with the ability of Fypon to match the exact proportions of the original clock tower trim detail and would consider specifying Fypon for future projects.”

Listed on the National Register of Historic places since 1972, the fully-restored courthouse now includes county offices, a city-operated tourism office and is home to the Jackson County Historical Society. A new museum of art, along with Harry Truman's original office and courtroom, are all open to the public.

“The clock tower is the shining jewel of this building and it was a privilege to be entrusted to its recreation,” says Thomas with Pishny Restoration Services. “We couldn't be more pleased with the results of working with the Fypon product on the clock tower restoration. We're looking forward to using the Fypon polyurethane materials again in the future when performing a restoration project where access is difficult and a long-lasting top-quality material is required.”