Benefits of the Variable Refrigerant Flow

The Next Big Thing in HVAC?

VRF, which stands for Variable Refrigerant Flow, is making a big splash in the United States after having been invented and used in Asia decades ago. Heat pump technology in the United States is well established, saving as much as 40 percent in electricity bills over traditional electric resistance heating systems, according to the U.S. Department of Energy. Buildings in the U.S. can reduce energy consumption by an additional 40 percent over that in many climates. Oregon State’s Pacific University chose VRF systems for two recently completed 60,000-square-foot student housing projects, Gilbert and Burlingham Halls, and could not be more pleased with the results. While the average Energy Use Index for residence halls in the Northwest U.S. is 80 kbtu per-square-foot per year, both of the newly built Pacific University Halls have consistently performed at an EUI of 46 kbtu per-square-foot per year. Similar results have been achieved for like projects across the country.

A traditional air source heat pump system is configured with one condenser unit located outside and a heat exchanger coil unit located inside within a single air handler unit. The refrigerant moves through the coils, hot or cold depending on what is needed, and air blows across the coils picking up the hot or cold from the coils and is then distributed throughout the building through a series of ducts. This system requires a large air handling unit to push air through the building and must be sized to overcome the friction losses in the ductwork, which can be as much as 20 percent of the total! Moving this much air not only consumes energy, but is also very loud. When this type of heat pump system is operating, it operates at full speed, there is no variation in air flow or coil temperature—when the thermostat sends the signal, it’s pedal to the metal!

VRF systems are essentially ultra-sophisticated heat pumps. One of the main differences between VRF systems and conventional heat pumps is that VRF systems use a single outdoor unit (compressor) connected to multiple indoor units (fan coils). This innovation alone accounts for much of the energy savings associated with VRF systems in the following ways:

The term variable refrigerant flow refers to the system’s ability to vary the amount of refrigerant sent to individual fan coil units depending on the amount of heating or cooling needed of the space being served. This feature not only improves energy efficiency, it results in precise temperature control by the occupants, within plus or minus one degree Fahrenheit. 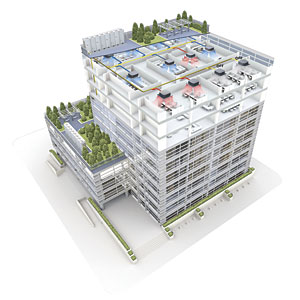 VRF systems are only beginning to be used in buildings in the United States. In Japan, where the technology was invented, VRF systems have been around for nearly 30 years and installed in many buildings. In 2006, L. Smith, in his paper “A Daikin Perspective on VRF,” estimated that VRF systems are used in approximately 50 percent of medium-sized commercial buildings up to 70,000 square-feet and one-third of large commercial buildings more than 70,000 square-feet. VRF systems have been installed in many building types including hotels, churches, office buildings, university buildings, schools, restaurants and healthcare facilities. Four years ago one VRF manufacturer could name only four VRF installations in the Pacific Northwest (a climate ideally suited for heat pump systems.) Today that same manufacturer can list dozens of installations. If the popularity of VRF systems follows the trend in Asia and Europe, the U.S. should see an explosion in their usage numbers.

VRF is Not a One-Size-Fits-All System

For all the advantages associated with VRF systems, it’s difficult to imagine any disadvantages—but there are a few. Heat pump technology is generally suited for milder climates due to the inefficiency that comes into play in extremely cold temperatures.  While there have been improvements to widen the range of operation in colder climates, some areas are better served with a more traditional heating system.

VRF systems do not provide any ventilation. While no ductwork is required for a VRF system, ductwork for the building’s ventilation system must still be designed and installed. For most buildings, this is not a major issue and the amount of ductwork and air handling equipment is still greatly reduced over a conventional forced air HVAC system. Building types that require a large amount of air changes, however, such as hospitals, may not be good candidates for VRF systems.

As with all new technology, there is a learning curve and an acceptance period that slows implementation. As more and more VRF systems are installed, and manufacturers work to educate owners, engineers, architects and contractors, VRF systems are beginning to take hold in the U.S. Ever increasing energy efficiency requirements and recognition of VRF systems unique efficiencies by the Department of Energy, the AHRI (Air-Conditioning, Heating & Refrigeration Institute), and ASHRAE have pushed the technology even further into the U.S. market. Mike Smith, senior marketing manager for commercial products at Mitsubishi Electric U.S. Cooling and Heating Division, says that VRF systems are the fastest growing segment of the U.S. HVAC market, and his company expects this trend to continue.

Straight Green: SERF A Green Building Rating System for the Rest of Us?

EIFS: The Greenest of Cladding Systems