This website requires certain cookies to work and uses other cookies to help you have the best experience. By visiting this website, certain cookies have already been set, which you may delete and block. By closing this message or continuing to use our site, you agree to the use of cookies. Visit our updated privacy and cookie policy to learn more.
Home » The Truth Behind Change Order Revenue
ColumnsDrywallTools and SoftwareAll in Agreement
ALL IN AGREEMENT

The Truth Behind Change Order Revenue 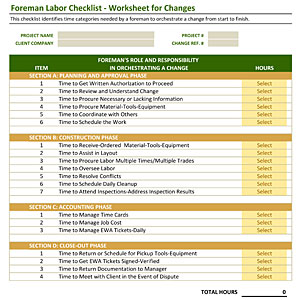 In essence, the total revised contract amount may be viewed as one revenue “bucket,” when there are actually two revenue buckets. My goal in writing this article is to provide a convincing argument that change order revenue is different from original contract revenue, from an operational and accounting perspective.

We can agree that change order revenue is generally the sum total of labor, material and equipment costs plus markup. However, when you dump these costs into the original contract amount bucket, the bucket becomes distorted. Consider for a moment the advantages of putting change order revenue in a separate bucket. A simple solution in separating the two buckets is to have an original contract bucket and a change order bucket. There are other ways to separate the buckets within one job cost depending upon your job costing system, and your change order polices.

In addition to knowing quickly whether or not you’re making or losing money on either of the job costs, as well as not distorting the job cost, there are many other advantage in keeping the two buckets separated. For example:

In most cases, subcontractors underprice change orders for a variety of reasons. However, most think, (at the time) they are making a lot of money on change orders. The problem is they don’t have a mechanism in place to prove they are making money on individual changes separately from original contract work. Here is one example in one category as to why changes are often underpriced. I feel the following form tells the story best.

To set the stage, an estimator or project manager typically reviews a change and adds a certain number of foreman hours based on what he or she believes, it will take a foreman to complete a change. The problem is that foreman don’t just complete changes, there is actually a process involved in orchestrating a change from start to finish.

In reality there are a minimum of four phases in the change process. They consist of the planning-approval phase, construction phase, accounting phase and close out phase. There are a total of 20 cost considerations in the four phases, however the person pricing a change must keep in mind the complexity of the change as he or she applies time to each of the cost considerations.

For example, Section A item 2 identifies a foreman cost consideration as, “Time to Review and Understand Change.” Depending upon the complexity of the change a foreman will always spend time reviewing and understanding a particular change.

Section C item 1, describes the foreman’s role in “Managing Time Cards” related to a particular change. Section D is simply the closeout phase of a change, which might include demobilization or other documentation, such as client verification.

Even though this form provides you with a systematic approach to identifying the amount of time a foreman will spend managing a change, some readers will automatically defer to adding roughly 10 percent of labor hours to the foreman labor category. Meaning, if a foreman costs $50 per hour, and a change is priced having 20 labor hours, adding two hours or $100 in foreman labor just isn’t enough.

However, getting back to the original point being, that unless you account for original contract revenue and change order revenue separately you won’t know if your charging enough foreman time.

In a perfect world, wouldn’t it be nice if two entirely different teams did original contract work verses change order work on jobs having a substantial amount of changes? Put another way, what would be the biggest difference if one team was responsible for original contract work and the other was responsible for change order work?

The biggest difference would be in how each team ‘accounted’ for original contract costs verses change order ‘pricing and costs.’ In other words, if a team’s sole source of revenue and profit is based on how well they do on change order work, you can be sure change order work will be accurately accounted for and vice-versa.

However, in the real world of construction, making two separate teams accountable is unrealistic and a duplication in costs, or is it? It depends upon how a project manager prices each change and how he manages the original contract costs verses change order costs.

For example, if a $200,000 job was bid to achieve a 15 percent margin, and the $60,000 in changes were priced to achieve a 25 percent margin, the total margin, if both the original contract value and changes are lumped together along with costs, should leave an owner wondering why the job cost ends up showing a gross of profit of only 10-12 percent

Consider for a moment having a $10,000,000 job with an additional $3,000,000 in change order work, again, roughly 30 percent of the original contract amount. As you begin to recognize $3,000,000 in revenue and the associated costs, your job cost will become distorted until you recognize all the revenue and all change order costs, which is usually towards the latter end of the job.

In doing so, your costs climb, which forces you to recognize more revenue, however, you won’t know how much money you’re making on the changes until all change order costs hit the job cost. In many cases, we call this the yo-yo effect. Executive calls project manager and says, “Hey, your job cost dropped two points-what’s going on?” The typical reply is, “We’re doing a lot change order work.”

As an owner, CFO or operations executive of a subcontracting company, why not eliminate the positive or negative impact changes have on a job cost by separating them? That way, when you call and ask, “Why did we drop two points on the original base contract?” You can be sure the response won’t be, “It’s because of all the change order work.” In other words, if you eliminate the ‘thing’ that distorts a job cost most, you will recognize a problem sooner rather than later.

Change is on the Horizon

All in Agreement: Price and Wait