The Environmental Cost of EIFS

This past Earth Day, I noticed an article published in the Digital Journal that is worth raising a couple questions. The article was crafted by the Brick Industry Association and was listed as a “comparisons on home exteriors.”

The article is entitled, “Fired Clay Brick Exteriors Prove Superior in Green Benefits, Performance.” As you read on, you’ll quickly realize judging an article by its title is often misleading. With the mention of Exterior Insulation and Finish Systems in the first paragraph, I had expected to see several comparisons between EIFS and brick. Apparently, I was wrong.

After reading through this entire article, I was left looking at the list of clay brick benefits, wondering why they decided to leave EIFS out. A couple of the points made in the document need further clarification, which is attempted in the comparative piece that this article references. The success of any comparative piece relies on the authors’ ability to sell an argument, while also doing the appropriate research to make the comparison in the first place.

To start, I looked at the topics of “natural materials” and “locally sourced” in the article, they read:

Natural Materials: Clay brick is available in thousands of permanent colors and shades that do not fade — unlike other competitors’ products. Clay brick does not off-gas volatile organic compounds or other toxic materials.

Locally sourced: Raw materials on average are 15 miles away from the brick plant. Manufacturing facilities are located in 38 states and within 500 miles of 49 of the top 50 U.S. metro areas. After mining the useable clay, the stock-piled top soil is spread over the area and trees and other vegetation are replanted to reclaim the land for other uses.

I immediately wondered if both of these topics are up to date. With advancements in paint pigments that prevent coloring and fading, EIFS becomes more flexible than brick is with its selection of “colors and shades.”

When it comes to what is “locally sourced,” I think the question has to be asked about how much energy it takes to actually create the brick. The real point being made is the cost and environmental impact of moving brick compared to EIFS. Did you know to move 25,000 square-feet of material, EIFS requires 16 times fewer tractor trucks than brick (according to proprietary study done by the National Institute of Standards and Technology)? Moving to the comparative piece there are further references to this topic in “Manufacturing and Distribution” of both exterior wall claddings. Specific figures always grab the attention of the reader, as did the figure pointing out that only “nine locations in the U.S.” are manufacturing EIFS. Unfortunately in this example, there was a major failure in providing a factual figure. I’m assuming the document intended to say there are nine EIFS manufacturers in the U.S., which would be closer to a factual statement; unfortunately what they’ve written is just plain wrong. When you look at the actual statistic their argument is at the very least cut in half.

For those of you who have worked with or know the benefits of EIFS, you’ve certainly heard energy efficiency listed toward the top of benefits. After realizing there is no reference to EIFS in the third bullet of the article, “Thermal mass helps to lower energy use.” I did some research and found a comparative piece issued a couple years back, which is referenced earlier in the Digital Journal article and states: “The rigid insulation board used as part of the EIFS system gives the wall added energy efficiency. EIFS have always been an energy efficiency alternative to other sidings, especially in retrofits.” There is obviously no advantage for the BIA to further mention the benefits of EIFS but I will gladly support this quote. Recent studies by the Oak Ridge National Laboratory validate EIFS as having superior thermal performance over brick in all eight climate zones. When it comes to comparing energy efficiency benefits of these two exterior wall claddings, it seems we have similar perspectives.

The bullet of “durability” is no surprise, since it’s often at the forefront of all arguments around brick’s advantages. For several reasons this topic needs further discussion and clarification.

Durability: Brick cladding usually performs well in high-wind events and generally does not require replacement immediately after the event. Testing has shown that brick veneer provides superior performance in moisture management. Brick offers a one-hour minimum fire resistance rating by itself, and exceeds the 34 mph impact resistance requirement for high velocity hurricane zones in the Florida building code. (BIA used a 2010 research document prepared by the NAHB Research Center Inc. as validation for much of this statement.)

As I said, there is further clarification needed on this topic, including the reference to a 2010 research document that acts as the foundation for their argument. This same exact document generated a response from EIMA back in 2012; the purpose of the response was to point out that EIFS was not even one of the tested materials in the study. Therefore, any conclusion that brick immediately trumps the performance of EIFS has no backing whatsoever since they haven’t tested the two next to one another. On the contrary, EIMA, along with the Oak Ridge National Laboratory and Department of Energy just recently released Phase III of a study that validates the moisture and thermal performance of EIFS vs. brick. Both industries representing these exterior wall claddings certainly have similar documents, but the major difference here is that the Oak Ridge National Laboratory document and study referenced from EIMA included both exterior wall claddings.

After moisture performance, durability and high-winds are mentioned—Specifically the Florida building codes. There have been several stories in the news lately showing the performance of EIFS against these exact hurricane style winds because EIFS also has passed (and exceeded) the Miami-Dade County Hurricane tests. Durability tests and case studies of EIFS are easily found illustrating the strength and resistance the exterior wall cladding can achieve.

Generally, comparison pieces are always interesting and entertaining to me because they provide the opportunity to see what competitors believe about an industry. We all spend time looking at these in order to fine-tune our message. That is one of the reasons this article misses a beat with what it initially said it was going to do. While looking at the comparative piece, it’s easy to remember the intent is to throw several bullet points out there that people will remember. It’s also important to not put too many out on your competition, or else your message won’t be as strong. When it comes to energy efficiency and environmental impact over a life cycle, we feel very comfortable in the ability of EIFS to perform.

There is no argument that brick performs well in fire testing, ignoring the fact that EIFS has also successfully undergone a variety of fire tests is where the issue lies. EIFS has passed a variety of tests, including: 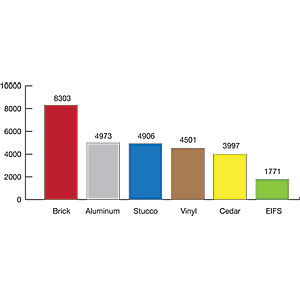 The final several bullets provided in the document are more “feel good” comments, rather than comparisons with opposing cladding. In many ways, this is their attempt to hit their comparison home. The document concludes with the fact that “brick can assist in contributing up to 27 points out of the possible 110” for LEED 2009 Version 3.0. Since this is a comparative document, I decided to look through figures to see how many EIFS can assist in contributing. My original thought had been that 27 out of 110 seemed like a very small percentage, but it became even smaller when I found EIFS can contribute up to 69 of the 110 points.

When it comes to debating the performance of EIFS, I remain confident that when given factual information the exterior wall cladding compares very well. The last line of the document’s introduction says it all: “A quick review of the facts.” Those doing research for BIA should spend a little more time reviewing the facts rather than this “quick review.”

In conclusion, we should all ask more questions about the articles we’re reading, especially making sure they are up to date. Everyone has a study and a cool catch phrase that grabs our attention, but it is that gray area in between in which you need to pay attention.