The design team at RMTA was challenged with creating a unique, collaborative space for a newly forged entity within Fortune 500 Company Sprint Corporation, breaking the rules of traditional corporate culture and branding.

The new organization, Sprint Accelerator, was to become a beacon for technology and entrepreneurship in the Midwest region, bringing 10 startup companies each year from around the world into Kansas City for three months of intensive work, where they would incubate their ideas, bringing mobile software and application innovation to the healthcare industry.

Engineering talent, executive mentors and other resources would be co-located within the space, to ensure the start-ups have an “unfair” advantage against the rest of the industry. At the conclusion of the three-month program, the start-up companies would have the opportunity to pitch their concepts to a number of established companies for the chance to receive both financial and professional backing.

Understanding these needs, the design team concluded that the space needed to echo what this new entity represented—creativity, innovation, diversity and first to market. The design team focused on maintaining the original structure, paying tribute to the century old building in the Crossroads Arts District of downtown Kansas City, originally built as an ice house in 1903, in an updated and modern way.

Exposed brick, wood timber columns, wood beam ceilings and original hardwood floors all contributed to the industrial loft look and feel of the new space. Stud framing was left exposed and connects to the ceiling where original inverted truss and wood beam are exposed alongside conduit and ductwork.

Because of the heaviness and height of the space, translucent polygal was used to divide areas throughout, allowing natural daylight to filter throughout the 12,000-square-foot co-working space. Stud framing can be seen sandwiched between the sheets of polygal, continuing the theme of structural exposure.

Structural brick columns were unwrapped from gypsum sleeves from a previous remodel, to match the original industrial feel of building. Original hardwood floors were refinished and left intact in the entryway, and modern hexagon carpet tiles in varying shades of grey were used throughout the rest of the space, with darker colors anchoring corners and gradations acting as a subtle way-finding mechanism.

Cantilevered soffits were brought down and built to anchor pitch areas, providing definition to a main meeting area within the co-working space. Strips of polygal are used in the cantilevered soffits, acting as a continuation of the 6-foot windows lining the back wall behind the pitch areas, directing daylight through the partially enclosed space.

Traditional use of corporate branding identity was set aside as unique elements that would provide subtle references to the Sprint brand were creatively worked in, allowing room for a new subculture to be developed. In the large pitch area, the Sprint logo was worked into yellow painted drywall returns, spanning a section of wall and working up into the cantilevered soffit, exposing the original brick structure behind.

As a nod to the history of telecommunications, an original early 20th Century telephone booth was painted bright, Sprint yellow and modified with data ports and USB connections, serving as both fun pop-up art and functional space. 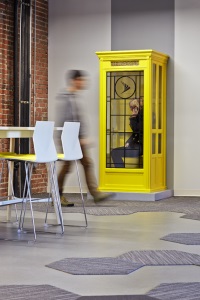 Thinking about the time individuals and collaborators would be spending in the space, 40 or more straight hours, the design team focused on providing the right balance of collaboration areas, spaces for privacy and amenities, with a goal of creating an overall space where people wanted to be.

Nearly every surface, from walls to countertops to tabletops, acts as a dry-erase board and is writable, so any idea that pops up into an end-users mind can be quickly jotted down. A “confessional room” was added where collaborators can go behind closed doors for some quiet time or to pour their hearts out to a video camera.

“We wanted to make sure the space inspired and promoted interaction,” project manager and RMTA architect Matt Murphy said.

“The Techstars guys—who I would say are authorities on co-working and collaborative spaces— said this is a world-class facility and the best co-working accelerator they’ve ever seen,” said Kevin McGinnis, vice president of Pinsight Media+ and the Sprint Developer program, according to a recent Kansas City Business Journal article.