This website requires certain cookies to work and uses other cookies to help you have the best experience. By visiting this website, certain cookies have already been set, which you may delete and block. By closing this message or continuing to use our site, you agree to the use of cookies. Visit our updated privacy and cookie policy to learn more.
Home » Little Rock's Platinum drywall explains what it means to be a contractor in Arkansas
DrywallInsulationMetal Framing

Between a Little Rock and Hard Place

Located in Central Arkansas, Platinum Drywall Inc. is a commercial drywall contractor working in Arkansas and surrounding states. The company’s mission is to deliver top level services to all its customers. With projects ranging from $3,000 to $8 million, no project is too big or too small. Some of its services include drywall, metal framing, fire and sound caulking, acoustical ceilings, acoustical wall panels and more.

At this year’s CISCA Convention in National Harbor, Md., Platinum’s President, Anthony Brooks, caught up with W&C to talk about business and how the company has branched from Arkansas and beyond state borders.

Anthony J. Brooks has been a mainstay in the construction industry for more than 30 years. He has been involved in all aspects of commercial construction including: drywall installation, safety, estimating, project management, accounting, and president/owner.

In 2001, Brooks started Platinum Drywall with the vision of delivering platinum level services. He is actively involved in the American Subcontractor Association at the local and national level, Associated General Contractors and American Society of Professional Estimators. Through his industry engagement, Brooks has traveled across the United States attending several conferences and witnessing several keynote speakers on the dynamics of the construction industry. His position allows him to see the state of modern day construction and serve as an advocate for the next generation of construction workers.

In 2014, Brooks (along with Platinum Drywall) was recognized as the Arkansas Regional Minority Business of the year.

“While we provide our services to a wide variety of job types including office buildings, medical services, retail and schools; we have established ourselves as the go to provider in the area of performing arts venues [as well],” says Brooks. “From the complete renovation of the historic Robinson Music Hall here in Little Rock to the new construction of the Murphy Arts District in El Dorado and including numerous high school performing arts venues and movie theaters, we feel our attention to detail gives the audiences of these venues the best entertainment experience they can.

Currently, the company has a workforce that runs between 100 to 120 people, with an administrative staff of about 10.

The company has seen a lot of growth over the past eighteen years. It started as a two-person company, specializing in tenant improvements and now Platinum Drywall is doing ground up to multi-level, high-rise projects.

“Business is good, we continue to see a good flow of bid invitations and our backlog is exactly where we want it to be,” says Brooks, adding that the company has experienced multiple years of consistent construction projects.

Brooks says that being part of a team that transforms concepts into physical buildings is what’s most rewarding to him professionally. Yet, he asserts that developing and maintaining a qualified workforce in such a labor-intensive trade has been the biggest challenge for him. 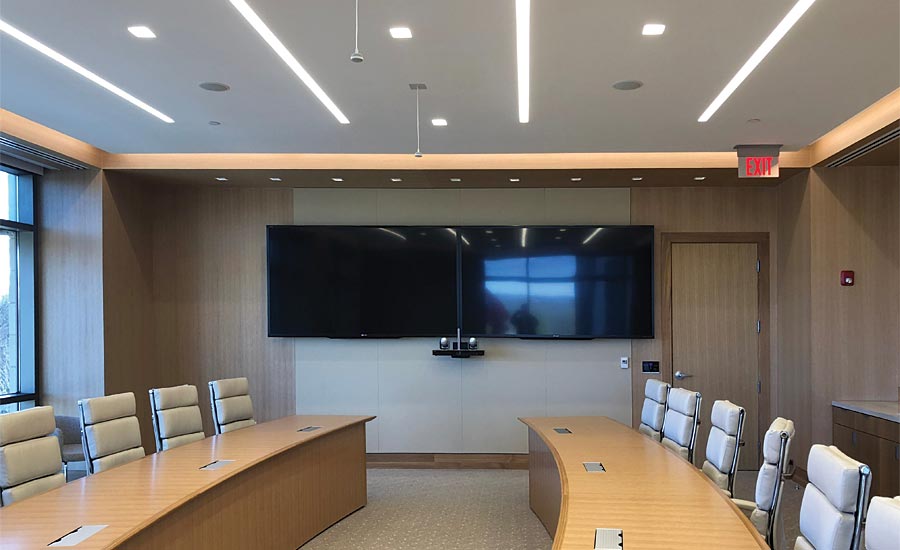 What started as a small community bank in northern Arkansas, the Bank OZK has grown and transformed into a large regional bank with 254 offices in nine states. For the past eight years, it has been recognized as the top performing regional bank by S&P Global Market Intelligence Ranking for Regional Banks.

The Bank of the Ozarks Headquarters is a 247,000-square-foot facility located on a 44-acre site. It is a state-of-the-art financial office building—from the functional banking lobby to an executive penthouse suite that has the capacity to accommodate up to 900 employees. When approaching the building, one of the first things you notice is the way the roofline contours in a manner similar to the foothills of the Ozarks, which surrounds the west Little Rock location. The defining exterior characteristic of the building is an eyebrow feature that not only contours with the roofline but also forms a frame for the significant glass curtain wall exterior.

Platinum Drywall was contracted to perform:

Once entering the building in its five-story atrium, eyes are drawn to the bronze and stainless-steel, tiger-stripe-inspired custom ceiling located above the atrium. Not only is metal wire very appealing to the eye but it is a critical feature of the life-safety plan. Should an unfortunate event (such as a fire) erupt anywhere in the building, exhaust fans above this ceiling will engage and the wire mesh becomes a ventilation system to remove smoke from the building.

The next feature you may notice would be the custom soffit profile which spans approximately a mile through the main concourses of the building. This soffit profile is built using CNC machined drywall over a prefabricated Armstrong drywall grid system.

Finally, what you may not notice are lights, air diffusers and sprinkler heads in the acoustic ceilings. The reason is because they are consolidated in an unprecedented triple 4-inch technology zone. Located within this only 12-inch wide section is a 4-inch wide continuous linear lighting system, a 4-inch linear diffuser and air return with the remaining 4-inch section containing the sprinkler heads. This system required a tremendous amount of coordination by Platinum Drywall with the HVAC, electrical and sprinkler specialty contractors—as well as the general contractor and design team—to integrate all of the functional pieces into this compact area.

“During this process we found that while the marketplace has a large number of accessories that may be compatible with a single 4-inch ceiling design, many of those accessories would not work in an environment where you have three of the 4-inch sections adjacent to each other as they tend to grow and widen when they get above the grid,” says Brooks. “This limitation was due to having all three co-located within a 12-inch area required us to coordinate to make sure we had components that ‘stayed in their lane’ in order to allow the other components to function in their lane.”

Products used for this project included:

What it Means to be a Walls & Ceilings Contractor

PODCAST: What It Means to Be a Top Insulation Contractor

Global Drywall Contractor Market 2020: What Will be the Total Product Consumption?