Case Study: The Drop-Out Ceiling That Paid For Itself

When Small Batch Organics, a specialty granola-making company in Manchester Center, Vermont, outgrew their first production facility, they leased space in an existing factory and took on the mission of remodeling it into a sparkling-clean food-processing facility. The company tackled the challenges of renovation and code compliance themselves, without a general contractor, and got a rapid education in construction. One of the surprising things they learned was that installing drop-out ceiling panels enabled them to utilize the existing fire sprinklers without alteration, saving them enough money to pay for the entire ceiling.

Small Batch Organics’ president Lindsay Martin describes her team of 13 as “pretty hands-on people.” The company’s original manufacturing kitchen was good as an “entry-level facility,” but it was oddly-shaped, and taught them what kind of space they really needed. “We totally understood how inefficiently we were working based on the dictates of our space,” she recalls. “We had a lot of practice tripping over ourselves.”

Their small New England town offered few options for industrial space, but they found a mattress factory where they were able to take over one bay vacated by the mattress manufacturer. That bay was formerly factory space with exposed structure overhead instead of a ceiling, plus a forest of sprinklers, HVAC ducts, compressed air piping, and other industrial leftovers of its previous use.

Martin headed up the project. “It’s easy to figure out how to build a wall,” she explains, “but I had never had to think about ceilings.” She confesses that, “I knew the Food and Drug Administration and local Health Department had food safety requirements for ceilings and overhead surfaces. I saw all the sprinkler heads and wondered how I was going to cover them with a ceiling?”

She started doing research online and found out that if they installed a suspended grid ceiling with common mineral fiber panels, they would have to bear a significant expense to renovate the fire protection system. The existing sprinklers are located near the underside of the roof and are oriented to discharge water upward. To be compatible with a conventional suspended ceiling, the main supply lines had to be turned to discharge downward, and pipes would have to be extended to bring the sprinkler heads down through holes cut into the new ceiling panels. Hygiene requirements would then require each sprinkler to be protected against accumulations of dust and grime.

Then Martin read about thermoformed acoustic panels’ drop-out capability. These panels can be installed underneath fire sprinklers, completely concealing the sprinklers, because of a special property they possess. If a fire starts, heat softens the thermoformed panels, they deform, and then drop out of the grid, exposing the sprinklers and allowing them to function and suppress the fire. This idea intrigued Martin, because it offered the possibility of using the existing sprinkler system without the expense of modifying it.

“We showed the product to our local fire marshal, and we got permission to do the ceiling without modifying all the sprinklers.” The fire marshal wanted documentation that the proposed drop-out ceilings met National Fire Protection Association standards, and he approved the project based on testing that had been conducted and the product’s approval by IAPMO-UES, an agency that evaluates product compliance with building codes.

Martin remembers, “I got to learn all about sprinklers, because I had to prove to the fire marshal that I had the approved type.

“Not having to switch the sprinkler heads probably covered the cost of the ceiling. It was a big bonus.” 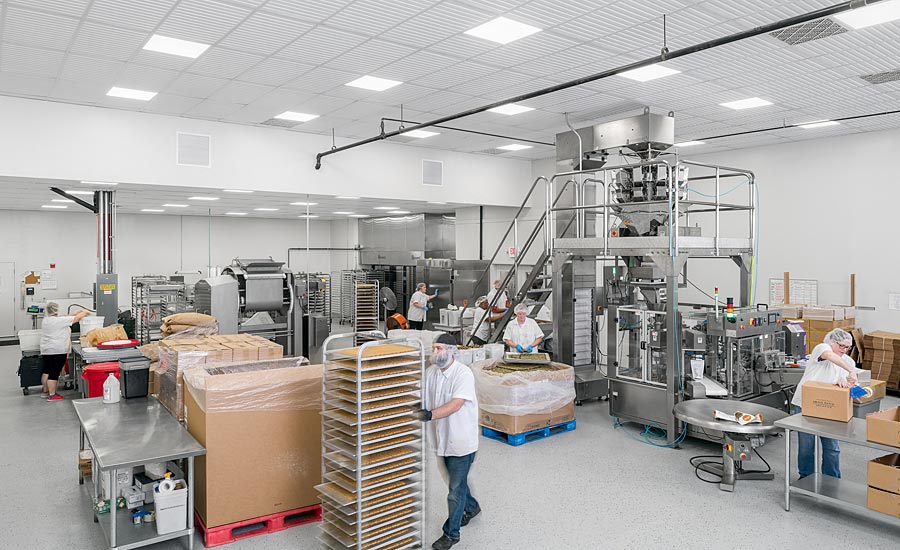 After: the refinished space is clean and bright.  White ceiling panels show its cleanliness, and have good light reflectance value to help produce even illumination.

Using panels with the drop-out capability eliminated the need to cut sprinkler holes through the ceiling, making it much smoother, gapless and cleanable. That helped Small Batch Organics comply with food safety regulations.

“The health inspector actually likes the way the ceiling turned out,” explains Martin. Because they didn’t have to cut holes for sprinklers, “there are very few places where contaminants can get into the bakery. Our ceiling is perfect, and smooth and clean. And I think everybody agrees, it looks really, really good.”

While thermoformed panels are fully washable and easy to clean, Small Batch Organics hasn’t had to deal with that. “We’ve had them up there for a year and they’re still perfectly clean and white.” They have occasionally had to move panels for access to above-ceiling mechanical systems, to make adjustments or repairs, and that proved extremely easy. “It’s so seamless to take them out and repair things above the ceiling, it’s pretty great.”

In their new facility, Small Batch Organics is baking 300-pound batches of granola 15 times a day. Their 5,000-square foot organic kitchen is supplying over 1,000 stores, and their Small Batch Organics brand is available across New England and the mid-Atlantic states, as well as nationally at Home Goods or from smallbatchgranola.com.

“It was a good project,” Martin sums up, “The ceiling is something I sort of obsessed over, because I was really intimidated at the thought. I mean, how was I going to cover that warehouse ceiling? It turned out to be one of the more seamless parts of the buildout of the space. It’s definitely been a positive experience."

Steven H. Miller is an award-winning writer and photographer specializing in issues of the construction industry. He is Creative Director of Chusid Associates, a consulting firm providing marketing and technical services to building products manufacturers. He can be reached through www.chusid.com.

A Look Above the Ceiling