TIPPING HAS BEEN A PART OF OUR CULTURE FOR AS LONG AS MOST OF US CAN REMEMBER. BUT IS THE CONCEPT OF A TIP HELPING OR HURTING OUR TIPPED EMPLOYEES?

Costs for materials seem to be escalating all around us. Some industries are experiencing more of this than others. As an association director, I am responsible for large meetings and events. This includes golf tournaments, conventions and seminars, and these costs seem to be skyrocketing, as well. For example, I recently reviewed a food and beverage contract for an event coming up for about 200 people. I already knew that soda at this event was going to run about $6 per can, with set-up costs for the bar totaling about $400, and server rates totaling more than $1,800. I understand this and it was expected.

What was not expected was what I saw next. A “service fee" of $1,100. A service fee? For $1,100? When I am already paying for the servers and bartenders? I guess the hotel thought that servers get paid for standing around and not serving and if we wanted to actually be served we need to pay extra for them to do the “serving” portion of the contract. They also added a gratuity of $400. I bet contractors wish they had this type of contract.

After the annoyance of feeling that someone is sticking it to me subsided, I wondered if it was the servers who are actually getting ripped off? Do the servers see any of that gratuity? Now before you go thinking I’m one of those negative businessmen always thinking someone is being ripped off, I have my reasons and historical experience to be suspicious. 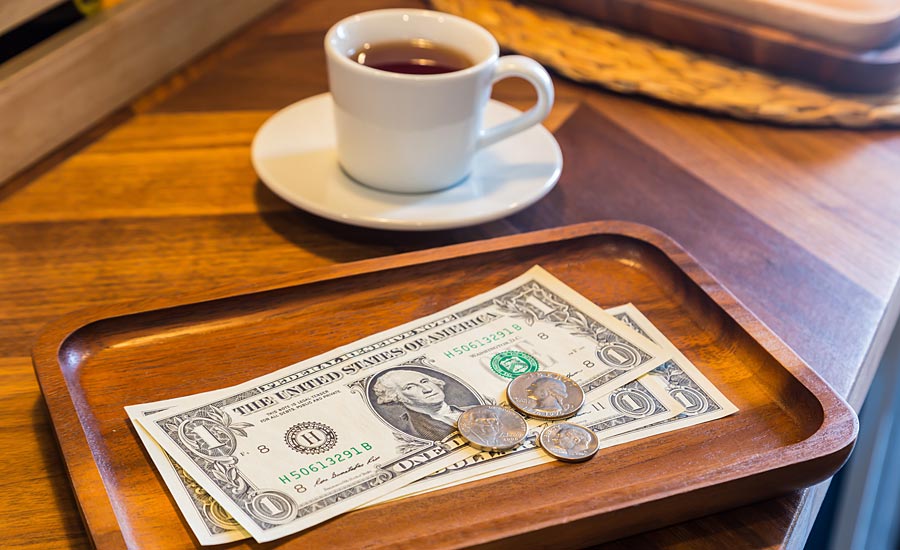 Where Do the Tips Go?

My wife and I went on a safari in South Africa years ago. The staff were extremely nice; the servers were polite and attentive to our needs with great efficiency. The head man noted to our small group that gratuities were appreciated and when the time came, we should give that gratuity to him and he would distribute it to the workers. My wife, who is not as trusting—or maybe I should say not as naïve as I am—started to chat with the workers. Not only did they have no idea what gratuity was, they didn’t even know what the word “tip” meant. So naturally, my wife went on a mission to make things right. She asked the guests to give her the tip money. After the generosity of the guests was collected, she had a good pile of cash. I knew her plan was to give it directly to the workers. I suggested we do this at breakfast, when all staff and guests were present. And when that time finally came and my wife was dispersing the money between our servers, management quickly sprang into action in an attempt to stop her. Turns out management was no match for a group of strong-willed women. No surprise there.

My wife was told by several workers that the gratuity she had given them was more than they made in a week and many broke down in tears. The guests and workers all felt great; management—eh, not so much. Afterwards, we were lectured on how inappropriate our actions were and that we could’ve potentially started a riot. It was worth it.

I learned on that trip that while tipping may be custom to most Americans—and most of us wouldn’t dream of not leaving a tip—that is not how other cultures approach it. Europeans invented tipping of service workers and contrary to popular belief, it was not to ensure prompt service. This practice started in the Middle Ages by royalty or elites of society. Eventually, the new class of wealthy started to tip as well, simply to show off to their friends that they had more money than their friends did. It was socialite’s way of expressing their wealth before mansions and expensive cars did that for them.

Tipping in America started when the newly rich Americans came back from Europe and wanted to impress, as well. Tipping eventually became mainstream in America after the Civil War. Today, tipping is an American tradition. It’s wrong not to tip. It’s no longer primarily used to show off your wealth. While I am sure there are some Americans whose intentions for tipping are just that, it’s now a way to show your appreciation to those workers who serve us our food or drinks, or make us a coffee we really needed that morning.

Ironically, tipping fell out of favor in Europe. It may be due to the collapse of the old monarchies. It may also be due to the fact that in Europe, restaurant owners pay sufficient wages, making tipping unnecessary. Is it time America takes the European lead on tipping again? I know people are cringing at this thought, particularly restaurant owners and servers. Minimum wage would have to be raised for tipped employees, with the current federal minimum wage being at least $2.13 per hour. However, it does make more sense from various angles. If we paid servers a living wage, tipping could be removed.

Now, restaurant owners may disagree and fear that higher costs would keep people away. Would this make the collection of payroll taxes simpler too? While it might increase workers compensation insurance, it is a more accurate reflection of labor. I doubt anything will change, certainly not in my lifetime. But, it is something to think about. Especially now that a lot of restaurants already include gratuity in your bill. I can try to follow regional customs in other countries or I can bring some of our American habits to them. Recently, when I tipped at a large gathering for dinner in Europe, I received a shocked look from our waiter. My wife informed me that I over-tipped again. I may be silly but I’m sure our waiter appreciated it.