The importance of sound control in single family residences is changing. Homes are increasingly serving as offices, exercise rooms and theaters resulting in a greater need for quiet spaces and privacy. This has resulted in an increased need for sound isolation in the home.

There are several ways to improve sound isolation in the home including mass, absorption, decoupling and damping. Little, if any, sound isolation testing has been done to evaluate how these various sound control options perform. PABCO Gypsum executed an extensive research study to quantify this information for the benefit of residential building construction professionals.

Sound transmission loss is currently the most widely known and in-depth measurement of sound isolation in buildings throughout North America. The STL is measured in a laboratory by creating sound with loudspeakers in one room (source room) measuring this noise with microphones, and then measuring the sound transmitted through a partition sample in an adjoining room (receiving room) also with microphones. 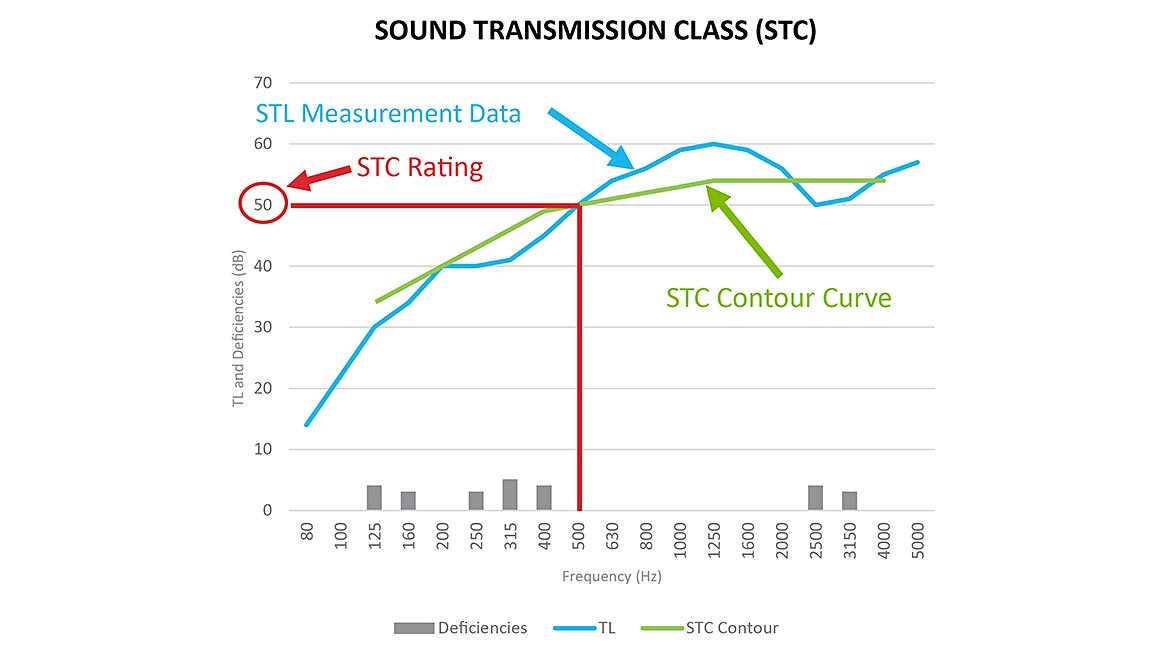 STL testing was completed in accordance with the ASTM E90-09 Standard Test Method for Laboratory Measurement of Airborne Sound Transmission Loss of Building Partitions and Elements. It was conducted at a third-party accredited laboratory, North Orbit Acoustical Laboratory located in Dyersville, Iowa, in May 2020.

All tests were conducted on 3½-inch, 2x4 single wood framing with studs spaced 16 inch on center, wood framing commonly used in the construction of single-family homes.

Nine different wall assembly configurations were tested in the laboratory (See Figure 2). All wallboard used in the study including the constrained layer damped board was 1/2 inch regular, the drywall commonly used in single family housing. In addition, three cavity types were installed in each assembly: no insulation, 3½ inch R-13 fiberglass insulation and 3-inch stone wool unfaced insulation. 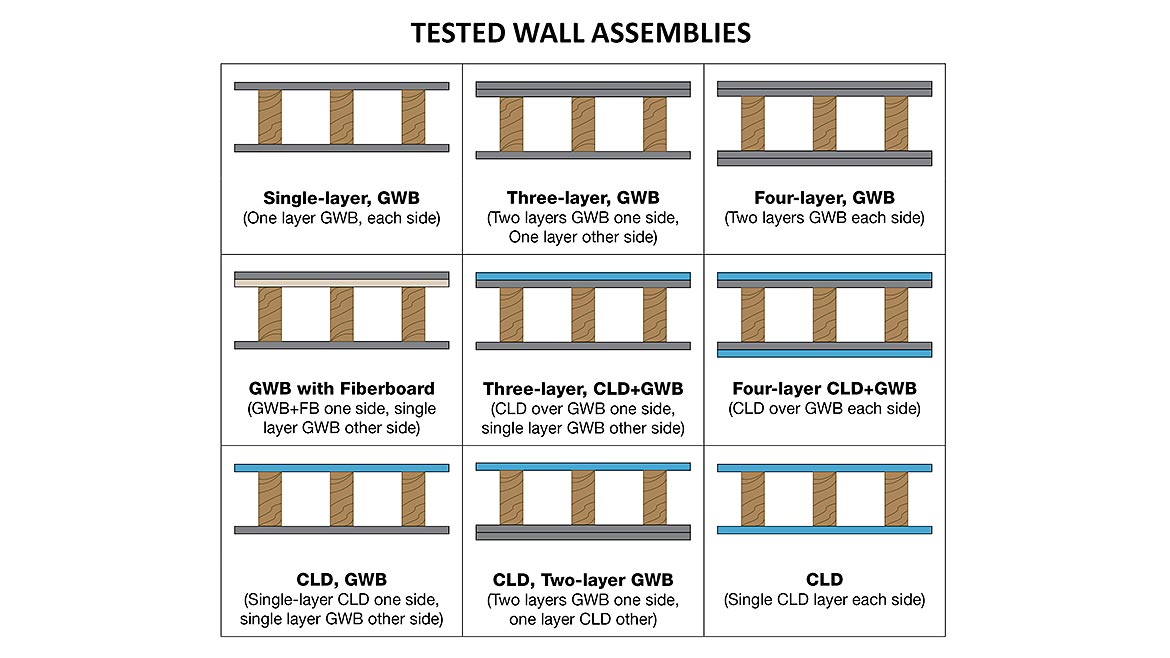 Mass: Adding a second and third layer of wallboard onto the base assembly (one layer of gypsum wallboard (GWB) on both sides) provided a 4-STC point increase in performance and between a 3-8 dB increase in STL over the frequency range reported by the laboratory.

Absorption: Adding fiberglass or stone wool insulation to the wall cavity resulted in a 3-STC point increase; slightly less than the addition of mass. The effect of the insulation was different across the measured frequencies—little to no improvement in STL at low frequency, a large improvement in the lower mid-frequency range of 10 dB and then a steady 5 dB improvement throughout the higher frequencies measured. No statistically significant difference was found between the fiberglass and stone wool insulation types.

Decoupling: Installing the GWB over a decoupling fiberboard panel increased the STC rating by 6 points. The STL performed consistently 5 dB better than the baseline GWB until 1,000 Hz, at which point the STL difference gradually increased to 15 dB at the high-frequency range.

Damping: Two different configurations of damping were tested—retrofit (where the constrained layer damped (CLD) panel was installed over the existing GWB) and direct-attached as would be the case for new construction. The retrofit damped configurations resulted in a 7-12 STC point increase vs. the baseline GWB performance. The STL difference varied with the largest improvement in the high frequency range, upwards of 25+ dB difference. The direct-attached CLD configurations resulted in a similar increase in both STC and dB STL difference from the baseline assembly. 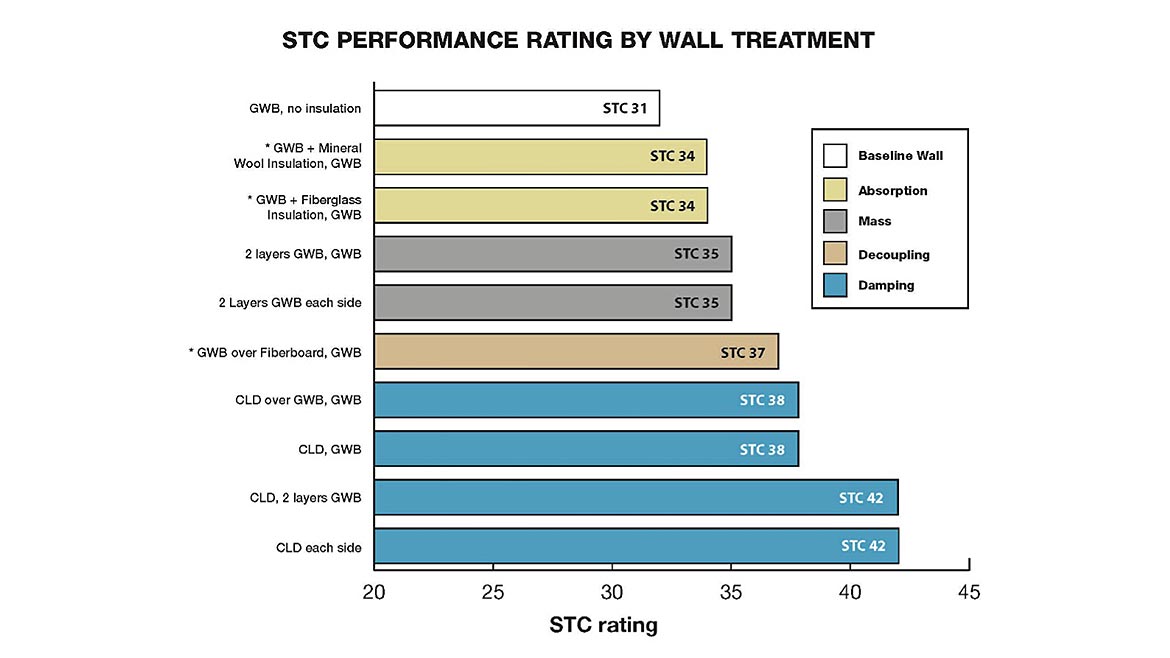 Figure 3: STC rating of mass, absorption, decoupling, and damping as compared to the single layer gypsum wallboard assembly with no insulation. The test configurations are shown on the vertical axis and the STC values are shown on the horizontal axis. All wallboard used in the study was ½” thick and all assemblies are without insulation unless indicated.

The STC rating compared to the baseline GWB partition without insulation and every other treatment—mass, absorption, decoupling and damping—is shown in Figure 3. The most marked improvements in performance occurred when the damped panels were added to the assembly. Adding fiberglass or stone wool insulation or additional panels provided only nominal improvements in sound isolation performance. The decoupling treatment provided slightly better performance than the mass and absorption, but less than the damping treatments.

Benjamin Shafer serves as technical services manager, Acoustic Systems for PABCO Gypsum, where he coordinates building sound isolation design with acoustical consultants, architects and building professionals. He conducts product research and development and has authored and edited several technical documents and industry guidebooks. He is an active member of several technical organizations, including the Acoustical Society of America, Institute of Noise Control Engineering, ASTM, and more. He is also the author of multiple papers on various topics in acoustics.