A DRYWALL CONTRACTOR IS PUTTING BETTER, SAFER TOOLS IN THE HANDS OF TAPERS.

Drywall finishing is one of the toughest jobs on a construction site. “Producing a flawless drywall finish takes a lot of training and skill,” says Jonathan Hughes, vice president of estimating and sales at Daley’s Drywall & Taping. The tricky part, he explains, is learning how to properly lay the tape and feather out the compound to an imperceptible edge. Simply put, drywall mudding and taping is hard, typically requiring a three-year-long apprenticeship before a taper can feel proficient.

In addition to being technically challenging, drywall finishing is also physically difficult. The sanding process, in particular, is tough on workers’ bodies. Sanding drywall requires workers to use either manual or power sanding tools, both of which involve repetitive motions, unnatural body positions, and above-head work with tools that are often heavy.

“Anyone who’s been on drywall knows that drywall sanding is the worst,” Hughes says.

Sanding expanses of drywall can cause great muscle and tendon strain, particularly of the shoulder’s rotator cuff, leading to the need for corrective surgery. Drywall finishers are also at increased risk of accidental falls since some of the higher work is performed while elevated on scaffolding. 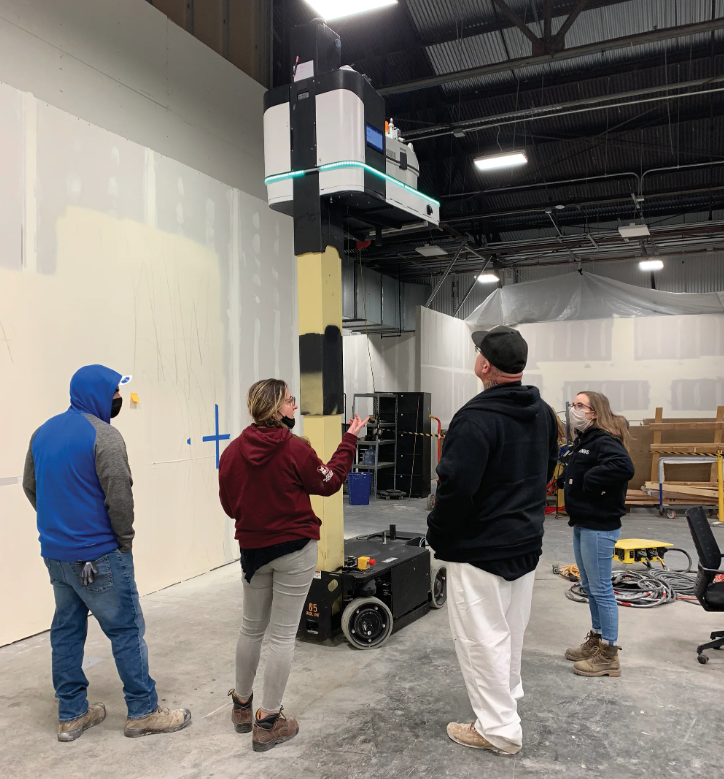 Daley’s tapers Tony and Karik are introduced to the Canvas machine.

Reducing—or even eliminating—musculoskeletal injuries and accidental falls is the main reason Hughes became interested in a drywall finishing machine being developed and produced by Canvas, a San Francisco-based construction robotics start-up. The Canvas system is a worker-controlled machine that has a robotic arm with interchangeable heads: a sprayer head that applies a single, even coat of mud on a wall; and a vacuum-equipped power-sanding head that sands the one coat of mud after one day of drying. The machine can telescope up to 17 feet.

Daley’s Drywall, for the past few years, has been working with Canvas as an Innovation Partner, helping the Canvas team to identify ways to improve the machine. Daley’s is joined in the Innovation Partner Program by DPR Construction, Webcor and Swinerton—three of the largest, most innovative, self-perform contractors in the nation; as well as two other large wall and ceiling subcontractors, KHS&S and Nevell Group Inc. The Innovation Partners provide real-time, hands-on feedback to Canvas about the machine and its capabilities, making it more valuable to their companies and their workers. “We now are currently testing the system and training our own workers on it, with the goal of soon leasing the machines,” Hughes says.

“The Innovation Partners’ feedback is incredibly valuable to Canvas,” says its CEO, Kevin Albert. “They are telling us exactly what they need the machine to do, based on their clients’ specifications, while helping us further improve the machine’s performance.”

“Canvas took the time to understand our pain points,” Hughes says. “They are really open to feedback and are looking for our input.”

While Daley’s Drywall continually seeks new methods and technologies for improving project metrics, Hughes maintains that the California-based drywall company is mostly interested in the machine’s ability to decrease worker injuries. “The driving force for Daley’s [using Canvas] is safety,” Hughes says. “I’m a third-generation drywall guy; my grandfather, my father and me. Canvas decreases repetitive motion injuries that result from sanding drywall.”

Karik Petlansky, who has been in the drywall finishing trade for 20 years and is now at Daley’s, says he has had two rotator cuff surgeries and one back surgery, all due to the physical demands of drywall sanding. Petlansky says those surgeries kept him out of work for two years, or 10 percent of his career.

Petlansky and another Daley’s finisher, Antonio Cadena, recently trained on the Canvas System at Canvas’s headquarters in a renovated Honda dealership in San Francisco. The building contains a large, open space where the Innovation Partners’ trainees can learn how to use the uncomplicated machines. “Canvas has kept it as simple as dialing into a power tool, like a spray rig,” says Hughes. “The technology is easy. Anyone can operate it.”

Petlansky and Cadena (who has been in the trade for 10 years), were interviewed before and after their training to become Canvas Certified Finishers. Below are excerpts from those interviews:

What did you think of the machine on the first day of training?

Petlansky: I was highly skeptical.

Cadena: I was very skeptical. I looked at the robot and I told [the trainer], “This ain’t gonna work.” I am only here because Daley’s told me to come.

What is your opinion of the machine now that you’ve learned how to use it on actual drywall?

Petlansky: After going through the process of training on the machine and learning how to use it, I think it really is going to be the future.

Cadena: After the third day of training, my mind had changed completely. The traditional way is that you tape it, top it as your first coat, and then you skim it as your second coat, and you’d add a third coat as a Level 4 finish, then you sand. The method Canvas is using is tape, spray, sand. Basically what they are doing here is a whole different way of taping.

What is the hardest part of drywall finishing?

Cadena: I’ll be surprised if there’s a taper that actually likes sanding. You know, a lot of tapers might say, “Sanding is the worst. The machine Canvas is using to spray and sand? I need to buy one personally. That machine is golden.”

How common is it for people in the drywall finishing trade to believe that the Canvas (or any other) robot is going to take their jobs?

Petlansky: I’d say almost everyone in the trade believes that. They also think it can’t do what we do. We [finishers, or tapers] trained for almost three years to do this well.

Having used the machine yourself, what would you say to those people now?

Petlansky: You still operate the machine. It just takes away the strenuous part of the work, which really benefits you.

Cadena: It’s a lot safer and it will be a lot easier for us to do the taping process. I think it could change taping.

The answers to the last question were great news for Hughes: “We were just at Canvas last week to provide input. Two of our people were also there, being trained. Both were dubious going into training. By the end of the week, they were saying, ‘When can I get one?’ The key for me is hearing it from them. That is very promising.”

“Yes, some components of the work will be done by machine,” he continues. “The bigger picture for Daley’s Drywall is how the machine improves safety and the level of quality it produces. I am just blown away by the quality. The Level 5 is pretty phenomenal. We do a lot of work for high-tech clients such as Apple, Google. I can see the Canvas System coming into play with demanding clients like these. It produces consistently high-quality finishes and can also have a big impact on schedules; particularly fast schedules.”

Daley’s clients, some of the most innovative companies in the world, demand that the construction of their buildings be built with the same focus on innovation and invention that they use to create their own products. One tech company recently included the use of construction robotics in an RFP for a large Bay Area construction project.

“Our owners are demanding higher technology,” Hughes says.” They are not scared of it. I can actually see them quickly putting this in Instructions to Bidders when they find out about it. I will not be surprised to see Canvas in owner ITBs.”

How does that affect Daley’s operational strategy? “We believe you either step into that mindset or get left behind,” says Hughes.” The typical mindset is to see how others do it, then be right behind them. Not Daley’s. “The company is in forum groups across the country. Non-competitors in other regions know it is using Canvas, and they are asking us how Canvas is doing. Everyone is keeping an eye on it.”

Daley’s focus on using the Canvas machine to improve worker safety has the power to produce big dividends. By making drywall finishing safer, companies can reduce safety incidents, which helps lower their insurance costs and makes their bids more competitive. But, as Hughes stresses, taking care of the people who do this work pays the biggest dividends. The Canvas machine provides tapers with a better, safer work environment and prolongs their careers. It also provides tapers with the knowledge that their employer cares.

Says Cadena: “Safety is Daley’s Number One goal. That’s why they’re looking at these machines, to minimize any safety issues.” That goal, to use Cadena’s word, is golden.

Jill Lonergan is a marketing and communications professional who has covered the A/E/C industry for 15 years and currently serves as marketing director at Canvas. Having worked with some of the largest, most innovative general contractors in the U.S., Jill is a raving fan of construction technology and believes in its power to transform construction.