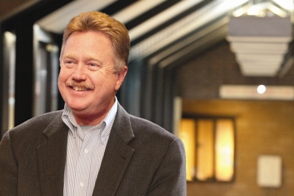 As the Principal-in-Charge for Cuningham Group developments in the United States and abroad, including numerous Urban Entertainment Centers in the People’s Republic of China and the Republic of Korea, it was no surprise the morning of Walls & Ceilings’ interview with Jim Scheidel, he was packing to leave for Beijing.

Scheidel works from the company's new office in Culver City, CA, however the Cuningham Group has many locations around the globe including: Minneapolis, Las Vegas and Beijing, to name a few.

His passion is spreading knowledge about sustainable building practices with people around the world, particularly leaders in the leisure entertainment industry. Scheidel started TESS, Themed Entertainment Sustainability Summit, where leaders from Universal Studios, Walt Disney Imagineering, and other major entertainment companies come together to promote an open dialogue about incorporating sustainability into the planning, design, and operation of theme parks.

W&C Architect: Where did you go to school?

Scheidel: I graduated from the University of Oregon in 1976, and I’ve been with the Cuningham Group for 28 years.

W&C Architect: How many years do you have in the profession? What is your focus?

Scheidel: Ive been in practice for 37 years.

I'm chairman of the board at Cuningham group, which really the focus is on leisure and entertainment, so really for the last 20 years my focus has been in designing and building leisure buildings around the world.

W&C Architect: Since you travel quite a bit, where do you go and why?

Scheidel: I live in the LA area, based in our office in Culver city. We have offices in Seoul, South Korea and Beijing. I spend quite a bit of time in Asia right now, previously to that I opened an office in Spain. Most of my work has been done Internationally and right now my primary focus is in the Korean and Chinese market.

W&C Architect: Can you discuss any green/sustainable solutions you and your company utilize?

Scheidel: Cuningham Group has designed our office in Culver to be LEED certified and we’ve done several LEED buildings across the country.

This is a personal passion of mine, the work we do for the leisure entertainment industry, whether it’s for Walt Disney, Universal Studios, Paramount, Warner Brothers, or Ocean park Hong Kong, these projects tend to be fairly large and they accommodate large numbers of people.

When you’re master planning a theme park you have the potential of utilizing a lot of energy, using a lot of land, and generating a lot of waste, and five years ago now through my contacts in the entertainment industry we established a summit called the Themed Entertainment Sustainability Summit, acronym TESS.

We convinced some of the leaders in the industry like Disney, Paramount, etc and got them to sit down and talk about sustainability is, and what that means for our industry— how we can design, maintain and operate theme parks more sustainably and there’s a great commitment within these leaders to be more sustainable. Over the course of the years attendance has grown and people have come from places like Hong Kong, and it has become a form of open communication which I think is very commendable for this industry, they all sat down and its sort of like there are no secrets­—how can we help each other be more sustainable?

This coming year we will get leaders of the Asian Entertainment Industry along with US leaders to kind of export our experience knowledge in designing things sustainably, and to me that’s where you can really make a difference.

It’s one thing to do LEED certified buildings, but if we can make moves to really make large developers become sustainable as well, that’s where I think the future is in terms of changing that dynamic and impact on the overall world. This has been my passion over the past 5 years promoting this, and something I'm most proud of in my entire career. If we can really begin to launch this effort in China, we can make a real difference in the way their developing these large scale leisure entertainment centers there.

W&C Architect: Cuningham Group’s project in South Korea, Alpensia was chosen as the site of the 2018 Winter Olympics, can you share more information about that experience?

Scheidel: We were actually called in by the group that had been awarded the contract and we were really brought in because of our experience in the leisure entertainment industry and because of the way we approach building in terms of story-telling and the guest experience, and ended up master planning many of the major venues. The intent was to make this a year-round leisure entertainment destination, not just about the Olympics, we had to create a place people wanted to come year round. We created retail facilities, golf courses, and things like that to make it a place people want to visit.

We're best at creating an environment and an experience for people, not just designing buildings.

W&C Architect: What was the turning point of your career?

Scheidel: The turning point in my career and Cuningham’s— we'd been doing some small work for Universal Studios based on Star Trek and that led me to participate in the cutting edge creation of "Back to the Future," and I worked with Universal hand-in-hand for 6 years. For the park we wanted to make cars fly and make it look like nothing people had seen before, so I worked on that from the very initial stages to ultimately building it in Florida and Los Angeles, and ultimately built in Japan. It set a new standard for theme park attractions where it was the first time simulation was fully submerged with large format film production and special effects. That opened us up to this industry because we met so many people.

This led us into working and having an ongoing relationship with Universal Studios and many people within the industry and we really invested time into master planning theme park projects around the world, this has been a growing process over a long period of time though, over 20 years.

W&C Architect: What sort of Walls & Ceilings products interest you?

Scheidel: We always promote products that are sustainable and types of products that are manufactured and take the environment into consideration. A lot of the wall and ceiling products that we deal with as our primary concern tend to be acoustic qualities and sound absorption qualities. We're always dealing with sound issues, and also durability. If you think about a wall in a queuing area where maybe 10 or 12 million people a year linger by it, it needs to be very durable, so durability and acoustic value while also developed from a sustainable perspective.