Curved walls need control joints and the standard rules for control joint installation in straight walls should be used as a maximum spacing guideline.

Every so often, it’s good to walk up to the edge of a cliff and jump off without a care as to whether you land on your feet. Expecting to be saved by a cartoonish rebound, this month we’ll go for it.

We’ve been pinged with a question recently that appears to have no clear answer in either of the third-party gypsum board application standards. The question also has not been addressed in any of the supplemental documents or newsletters we issue.

It’s unclear why the subject has arisen but we’ve been asked repeatedly whether curved gypsum board walls require control joints. We get odd surges in questions on occasion, but they usually occur because of a lack of trust between participants on a contested job site issue; one person gets an answer from us that doesn’t suit someone else on the job and everyone else involved wants to corroborate the answer.

This time the questions are coming from different geographic areas and appear to be unrelated. Upon contemplation, my sense is that we are getting the questions for two reasons—one reason is good and the other reason is not-so-good.

The good reason for the question is that the gypsum board industry has done an excellent job of educating the design community on the need for expansion relief in gypsum board systems. Architects and contractors realize that they need to install control joints in walls and ceilings or they risk cracks appearing in finished surfaces. The not-so-good reason is that the fully precise answer to the specific question doesn’t exist. To an extent, we’ve created our own monster.

GA-216, Application and Finishing of Gypsum Panel Products, and ASTM C 840, Standard Specification for Application and Finishing of Gypsum Board, both state that “a control joint shall be installed when a wall or a partition traverses a construction joint in the base building structure.” Clearly, regardless of its length, plane or curvature, if a gypsum board wall crosses a building or structural construction joint, expansion relief has to be installed in the wall. The potential for cracking in a gypsum board wall is exacerbated if the structure moves and a wall that bisects the point of movement is static.

But what of the circumstance where a long, curved wall never crosses a construction joint? Is a control joint needed at some specific interval in the gypsum board surface?

This is where the issue gets murky and we advance toward the “cliff of opinion” as both GA-216 and ASTM C 840 appear, at first read, to only address “straight” walls and partitions.

When addressing a wall that does not traverse a building structural joint, GA-216 and ASTM C 840 are in sync: “control joints shall be installed where a wall or partition runs in an uninterrupted straight plane exceeding 30 linear feet.” In this instance, there is no question about expansion relief in a straight wall—the wall absolutely requires expansion relief if it runs more than 30 feet in any direction. 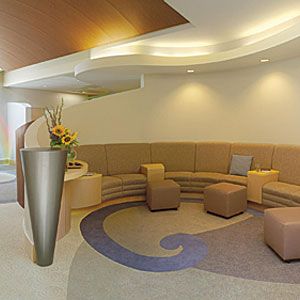 The problem arises when one attempts to apply the same language to a curved wall. Notwithstanding a very serious Euclidian geometry analysis, the phrase “straight plane” appears to limit the application of the language to walls and partitions that are straight (i.e., not curved) and that run in a continuous plane. It does not appear to address curved walls.

In my opinion, that interpretation begs for potential problems because gypsum board, regardless of whether it is attached to a straight wall or a curved wall, expands and contracts. As a consequence, I would suggest that curved walls need control joints and the standard rules for control joint installation in straight walls should be used as a maximum spacing guideline for curved walls. Here are three reasons why:

Over the years I’ve written articles about the thermal coefficient of linear expansion and the hygrometric coefficient of expansion for gypsum board. If you want the detailed explanation of both, go to the Walls and Ceilings archives and download the February 15, 2007, edition of this column.

The expansion and contraction characteristics do not change based on the orientation of the board or the curvature of the surface to which the board is attached. A gypsum board ceiling and a gypsum board wall that go through an extreme change in temperature will expand at an equivalent rate.

Without rehashing the details of the referenced article, if exposed to a temperature change of 50 degrees Fahrenheit, the gypsum board on a 60-foot-long wall will expand or contract, depending on whether the temperature is going up or down, approximately one-third of an inch. If the board expands, the joints will be forced together. If the boards contract, the joints may open up. And it is in the latter instance where the real trouble begins because that movement can appear as cracks in the surface of the finished wall.

Put simply, the board doesn’t know whether it is installed on a straight wall or a curved wall; it is going to expand or contract regardless of the application involved. Assuming that the board on a wall won’t expand or contract because the wall is curved is asking for trouble.

The 30 foot rule is written for a wall where the boards are attached to a flat, straight planar surface. A properly constructed flat and straight wall should impose no stress on the attached gypsum boards.

Now try to make that same argument for the outside face of a curved wall. Even if the ends of the board are fully secured to the studs, the simple act of bending the board even slightly will place stress on the joints. That stress undoubtedly will transfer to the face of the joints if the board, or the wall, begins to move. It’s a situation that begs for control joints.

The application standards for other materials don’t differentiate between straight and curved walls. The Portland Cement Association, for example, lists many criteria for the spacing of contraction/expansion joints in a stucco application including the following: “no panel should exceed 100 square feet for horizontal, curved or angular sections. “That criterion is actually more restrictive than the standard joint spacing for a vertical wall—“no panel should exceed 144 square feet”—and points out the need for control joints in any surface that is susceptible to movement regardless of orientation. (See: www.cement.org/stucco/faq_spacing.asp)

It’s kind of like driving on a highway with no posted speed limit. It may be legal to drive 200 miles an hour, but it isn’t necessarily prudent to do so. In turn, just because no specific rule exists to dictate the need for control joints in curved walls it doesn’t mean that it is sensible to neglect them. The logical person would dial it back a bit on the highway. That same person would consider installing control joints in a curved wall regardless of the interpretation of the relevant application standards.

Michael Gardner is the president of M Gardner Services LLC, a consulting firm that assists organizations with issues involving industry standards and building codes, meeting management, and external collaboration and outreach. Prior to establishing MGS, he was the executive vice president of Compliance Programs for the International Code Council. He is also the former CEO of the Gypsum Association, currently serves as a special technical advisor to the Wall & Ceiling Alliance and can be reached at michael@mgardnerservices.com.
You must login or register in order to post a comment.