If you are like me, you have a love-hate relationship with screw fasteners; love the ease of power drilling a screw versus hammering a nail and love the strength and surety a screw provides, but hate all the different types of screws and screw heads and stripping screw heads and drill bits. A newly invented screw takes all the hate out of the relationship and is set to revolutionize the screw fastener world. Appropriately called Outlaw Fasteners, the company founders were tired of dealing with stripped screws and in the process of designing the ultimate non-strippable screw, found more problems that they also designed fixes for. Their "screwvolutionary" fastener will not strip, remains stubbornly attached to the drill bit without using anything magnetic, uses the same drill bit for any sized screw, is self-piloting and self-countersinking.

The Greenest Screw Ever Made?

I'd like to be able to tell you that Outlaw screws will result in X percent reduction in waste due to the elimination of stripping of screw heads and drill bits and dropping screws that slip out of the bit. I'd like to, but I can't. There is a dearth of information about screw waste due to stripping and dropping.

The company's director of marketing told me that contractors they worked with in developing their screw typically buy 5 pounds of bits for six boxes of screws. That's how many bits they go through to sink six boxes of screws. By comparison, these same contractors were able to use a single Outlaw bit for every 100 conventional screw head bits!  Outlaw's in-field testing also revealed a reduction of waste due to stripping and dropping screws, but how much is anyone's guess. If anything like the drill bit waste reduction, this will also be significant. 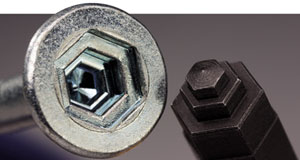 Outlaw also worked on packaging efficiency, which results in transportation fuel reduction, reduced greenhouse gases and other transport related pollutants. Before you start guffawing about the legitimacy of that, you should know that this is a bona fide science. Michigan State University invented packaging as an academic discipline in 1952 and offers Bachelor's, Master's, and Ph.D. degree programs through its highly regarded School of Packaging. In addition to packaging efficiency, Outlaw makes their uniquely shaped hexagonal boxes from 25 percent post-consumer recycled plastic. And the container is fully recyclable with any curbside recycling program.

How to Start a Business in the Third Millennium

Outlaw founders did what has become a very popular experiment to get a buzz going for the product and to pick up some additional funding. Outlaw initiated a Kickstarter campaign, one of several Crowdfunding companies that allow startups to collect money directly from the public instead of more traditional funding sources. In short order Outlaw's Kickstarter initiative raised more than $100,000 with 600 backers having pledged. The biggest Kickstarter campaign ever funded in the state of North Carolina, Outlaw's home base.

Now that they have reached their funding goal, Outlaw is busily working to get their product manufactured and into the market. There is no guarantee that projects funded through Kickstarter will be successfully implemented. Successfully funded Kickstarter projects sometimes fail due to underestimated costs or unresolved technical difficulties. The huge amount of enthusiasm generated by these new screws, supported by overwhelmingly positive testing feedback, have allowed Outlaw to acquire the additional funding necessary to get the product to market, and they promise this is going to happen May-June just in time for the start of the busy deck building season.

Every new product brought to market has to start someplace. Outlaw made the decision to begin with the wood deck industry for several reasons. The company explains:

Everybody wants a better deck (funny and true). A "deck screw" is really just a basic wood screw specifically designed to be used when attaching deck boards to a foundation board. We chose to introduce the Outlaw brand of screws with a deck board screw because of the multitude of technical problems associated with the current commercially available screw choices. When screwing down a deck board you are always (+/-) drilling down and this means the screw will drop off of your bit, unless you hold it on with your other hand and that is a pain in the neck and back. The other screws have a tendency to wobble when you start to drill which can turn into a miss-drilled hole or scratched deck boardÑboth of which are really bad. The torque when drilling a deck screw is high and, when using other brands of deck screws, results in stripping the screw head, which means you have to manually unscrew the messed up screw with a pair of pliers. This sucks. Finally, many of the currently available screws require multiple sized bits for a 1- to 8-inch deck screw. We only need one.

Starting with deck screws required the company to consider nearly every issue associated with screw fasteners. The folks at Outlaw are convinced that their product will supplant every other screw type in every market, one by one.  Elmore says, "We're going to take it one vertical at a time and one distribution level at a time, until it needs to be in Home Depot and Lowes." The company plans to conquer the deck market with "The World's Best Deck Screw," and if all goes to plan you can expect to see a drywall screw on hardware shelves, which is the next vertical market the company plans to tackle.

Straight Green: SERF A Green Building Rating System for the Rest of Us?

Straight Green: In Search of a Better Rating System

Straight Green: I Hear You Have a Cold!

Straight Green: In Need of a (Guilt-Free) Vacation