The male to female population in the United States is roughly even at 50 percent male and 50 percent female. However, the number of woman working in the construction industry is less than 1 percent of the overall workforce.

Women are projected to account for 51 percent of the increase in total labor force growth between 2008 and 2018. The median weekly earning of women who were full time wage and salary workers were $699 or 81 percent of men’s $824.

When combining the fact that women account for 51.5 percent of all workers in high paying management and professional occupations and that women are projected to account for 51 percent of the increase in total labor force growth by the year 2018, it doesn’t take a rocket scientist to realize that women are not interested in our industry. The simple fact of the matter is that women view construction as a career path that doesn’t offer them the opportunities they want or expect.

Nursing is considered a high paying occupation consisting of 90 percent females and 10 percent males. The reason the nursing industry is female dominated has nothing to do with females being predisposed or inclined to being nurses because of their genetic makeup. In other words, it’s not because they are women, it’s really the result of an industry providing women with the opportunities they are looking for.

Most men enter the construction industry for three reasons. The money is good, educational requirements can be low, and the sky’s the limit in terms of opportunity. A young man can start his career in the field and work his way up the ladder. Most women on the other hand are not willing to risk their educational dollars or time on a male dominated industry employing less than 1 percent women, knowing there is little opportunity for them. 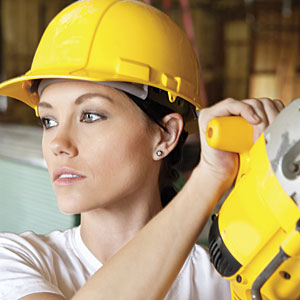 When considering the cost of a college nursing degree as compared to a construction management degree the cost is roughly the same, being about $110,000. In all honesty, if you were a woman equally interested in both fields, which field would you choose to invest your educational dollars and time? Conversely, which field would a man equally interested in both career paths invest their educational dollars? The decision becomes very easy for women when they consider the limited equal opportunities that exist in construction.

The National Association of Women in Construction originally began as Women in Construction of Ft. Worth, Texas, in 1953 and was started by 16 women working in the construction industry, knowing that women represented only a small fraction of the construction industry. The founders organized the NAWIC to create a support network for women in construction. As a result, the organization gained its national charter in 1955 and became the NAWIC. Today, NAWIC provides its female members with opportunities for professional development, education, networking, leadership training, public service and more.

Little by little, the NAWIC and its members have made progress in creating opportunities for women in our industry, however, the fact remains that in the organizations 61-year existence the number of women in construction is less than 1 percent, meaning the majority of career-minded women avoiding our industry avoid it as a result of its culture and resulting limited opportunities.

All employers are eager to hire the best of the best people and really don’t care about male to female ratios because they have a business to run. The same is true in our industry; however, because our industry is 99 percent male, resulting in a very dominant male culture; hiring choices are for the most part limited to males, and it will stay that way until the construction culture changes.

Keeping in mind that according to the U.S. Department of Labor, “Women accounted for 51.5 percent of all workers in high-paying management, professional, and related occupations such as nurses, teachers, medical managers, psychologists, tax examiners, administrators, auditors, underwriters, medical scientists, and financial managers.”

Based on this information, it’s clear that women are more than capable leaders and that the number of women in high paying management positions is only going to increase. The question is whether or not construction employers see these statistics as an opportunity. The train in this regard is leaving the station and very few construction employers have a strategic plan in place to get on board.

For example, if construction employers want to increase their talent pool areas of our industry that could benefit from having a strong female presence are “estimating and project management.” However, the biggest problem employers will face in their strategic plan to attract and hire women in these important positions is simply how negatively our industry is viewed by women looking for barrier free opportunities.

The question becomes, “How do we change the perspective women have of our industry?” More specifically, construction employers should ask, “Is our company’s culture restrictive in any way towards women?” Or, “Does our company have a culture conducive to attracting highly motivated, career minded women estimators and project managers?”

The only way to change a company’s culture in this regard is to identify the cultural problem and work towards changing it by making the change a company-wide priority. A cultural change like this is very difficult to overcome when one considers the unspoken, unconscious, ingrained beliefs restricting both women and employer opportunities, however it’s surely not a secret to the Department of Labor or women.