Part I of a two-part series examines how adopting German innovations could benefit various building systems in the U.S.

Epsten Group’s current work in Germany and my German education allow me to keep up with German innovations in the built environment. Germany is now commonly acknowledged as one of the top three countries for innovation, ranking slightly ahead of Japan on most lists, with the U.S. at the top. German innovations are commonly implemented in Europe, but many of them still haven’t seen any real adoption here in the U.S. However, U.S. construction could benefit from German thinking on building envelopes, energy- and water-efficient building systems and, as will be discussed in the next issue of EDC, policies that support green roofs, active solar systems and alternate approaches to planning and transportation.

German building envelope innovations, along with active solar systems, have transformed buildings beyond net-zero site energy (where a building produces as much energy as it uses, as measured throughout a year); they are now functioning as net energy exporters. 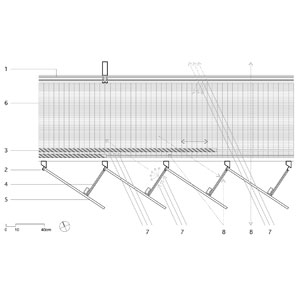 Germany is so far in the forefront of building-envelope design that discussion on this topic in architectural and engineering circles has evolved into an “active” versus a “passive” building conversation. Some German architects subscribe to the super-insulated-box-with-a-few-punched-out-windows aesthetic to meet the Passivhaus (passive building) standard with this thermal envelope approach. Now, an alternative to the Passivhaus approach has been described in the book Aktivhaus1.

The book suggests that more glass is feasible with often triple-insulated windows and more active solar technologies on roofs and integrated into façades. Like a Passivhaus, an Aktivhaus is so energy efficient that it allows certain mechanical systems to be minimized in design and operation or avoided entirely. While the book’s examples focus on low-rise buildings, where more roof surface with active solar systems relative to the conditioned volume results in better energy performance, there are multistory buildings in Germany that offer success stories.

The 8-story Oskar von Miller Forum in Munich, by pioneering architect Thomas Herzog, produces more energy than it consumes. Completed in 2009, it serves as a good example of an “active” building with a multilayered envelope and active solar systems.

The roof is used for large solar thermal collectors, and a corner stairway at the eastern end features glazing shaded with louvered photovoltaic panels. But the most “active” and interesting feature is the building’s double-skin exterior at the south-facing upper floors, above a simpler ground-level façade. The building’s double skin contains several active operational options amid the exterior wall elements and is a deeply layered feature, with an inner layer (See item 1 in the diagram on p. 19) with insulated glazing and operable windows and an outer layer (2) for weather protection and sound control, the latter consisting of a specially developed folded pre-façade hung from the roof structure with translucent (4) and transparent (5) single glazing. Between the two façades, aligned with each of the upper floor levels, are narrow walkways (6) with metal grates and floor-to-ceiling wooden sliding shutters (3) immediately to the inside of the pre-façade. The translucent panels and the wooden louvered sliding shutters provide control over admission of direct sunlight (7) and views into and out of the building (8).

The layering of active elements is a modern-day expression of Germans’ traditional love of operable windows and daylight and their dogged determination to use what is available on the outside first before employing air-conditioning, heating or ventilation systems.

“It is a holistic approach,” says Thomas Rühle, a partner at Intep – Integrated Planning LLC in Munich, working toward seeing even more new German building technologies implemented. “It is the sum of all of them. We have a lot of innovative technologies. We just have to use them.” 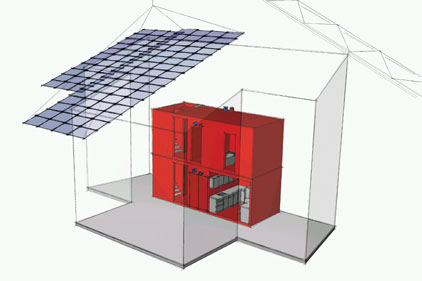 Epsten Group recently worked as energy consultant on a new building in Switzerland that uses glass-fiber-reinforced plastic composite materials for the profiles of its curtain wall. These profiles, now offered by several manufacturers in Germany, offer greatly improved insulation values versus aluminum profiles. Another innovation now being introduced in Germany is motivated by a quest for transparency. Instead of solid walls, buildings in Germany are opting for transparent curtain wall profiles.

In addition to providing shade, louvers such as those at the Oskar von Miller Forum produce power with integrated photovoltaics. Some have tracking capabilities and/or photocell controls to optimize their shading and power generation capabilities.

The 2011 exhibit Das Haus, developed in collaboration with Darmstadt architecture students, featured 1-inch-thin vacuum-filled panels wrapped in reflective foil and installed in two layers with staggered joints. This system provided an insulation value 10 times that found in a similar dimension of rigid foam insulation. Its thinness also makes it ideal for superinsulated doors and window shutters.

Exterior finishes based on the lotus leaf

The Lotus-Effekt is based on observations that the leaves of the lotus plant emerge from muddy water perfectly clean. The rough surface of the leaves lets water droplets roll off, carrying dirt particles with them. The technology based on this principle, patented in Germany, entered the manufacturing industry about 10 years ago. Now several commercially available finishes in Germany, including stuccos and paints, use a water-repellent double-structure surface with self-cleaning properties, minimizing cleaning-related water and energy use.

Energy-efficient buildings in Germany are often supported by systems that rely less on air movement than on radiant surfaces for heating and cooling. Open windows and a small-ducted system with energy recovery provide ventilation air. The radiant heating and cooling is mostly provided through floor or ceiling panels or beams, sometimes with additional radiant or convection perimeter heating.

Still in its infancy in the U.S. but commonly used in German buildings is a system with variable refrigerant flow that connects one condenser to multiple evaporators, thus precisely conditioning multiple zones and providing individual comfort control while only working at the required rate.

Germans have long understood that fast delivery of water at the exact desired temperature saves energy and water. German systems have been on the forefront of highly responsive, precise indoor water thermostats, commonly used in shower controls.

Recognizing that complicated, potentially expensive systems are required to operate a PlusEnergy house (a term he coined in 1994 to describe a net-zero site energy exporter), architect Rolf Disch devised “The Powerbox,” a self-contained, premanufactured module containing the necessary equipment. A bathroom module stacked on top of a kitchen module form the core of a house, complete with stairs. This core contains ventilation systems with energy recovery of 90 percent or better, a technical room that supports the active solar systems and provides energy storage and electrical systems, and meters and controls related to the production and consumption of resources. A high-quality yet entirely affordable PlusEnergy single-family home can be assembled on site by crane.

In a subsequent article for the May issue of EDC, I will explore how German public policy supports and nurtures progress in sustainable design and how it helps create entire communities that embrace energy efficiency at a rate unknown in the U.S.