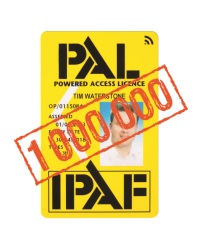 To celebrate the one millionth PAL Card ever issued, IPAF is calling all valid PAL Card holders to enter a draw for some amazing prizes. The PAL Card expires after five years and there are currently more than 500,000 valid PAL Cards worldwide.

There will be five top prizes for verified operators to win a free trip to the access event of the year, the IPAF Summit and International Awards for Powered Access (IAPAs)—flight, accommodation and gala dinner included. This event will be held March 25-26, 2015 at the Crystal Gateway Marriott Hotel in Arlington, Virg. near Washington, D.C. Details at www.iapa-summit.info.

“The secret of the PAL Card’s success is the guarantee that the training and testing is delivered to consistent standards worldwide by highly motivated and qualified instructors,” said IPAF CEO Tim Whiteman.

All valid PAL Card holders are invited to enter the draw by verifying their PAL Card at www.ipaf.org/checkpal.

PAL Holders Now Half a Million