The Cold-Formed Steel Engineers Institute (CFSEI) has named Bill Babich, P.E., and director of engineering for Alpine TrusSteel in Orlando, Fla. as the recipient of its 2015 Distinguished Service Award. The award, which recognizes the significant contributions of an individual who has volunteered time, talent and resources to the cold-formed steel industry, was presented May 19 during the 2015 CFSEI Expo at the Rosen Centre Hotel in Orlando, Fla.

“Over the years, Bill has been actively involved at the committee level with many cold-formed steel framing organizations, with a strong commitment to advancing products and technologies and then taking that information directly to architects, engineers, contractors, building officials and others who can use it,” said Maribeth Rizzuto, LEED AP—BD+C, managing director of the Cold-Formed Steel Engineers Institute.

“No request is too small, and his reliability is exceptional. An example is Bill’s voluntary position as moderator of the CFSEI Webinar series. For the past six years, we’ve hosted 30 CFSEI webinars on a wide range of technical topics, and Bill has moderated all but two of them. He is equally committed to other industry organizations, to the great benefit of all. It is fitting and personally rewarding as well to recognize Bill with our highest award for individual achievement.” 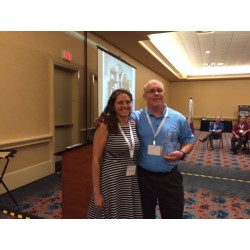 Bill Babich has been involved in the prefabricated truss industry for more than 29 years, with focus on cold-formed steel trusses since 1997. He is a member of the American Society of Civil Engineers (ASCE), the American Institute of Steel Construction (AISC), the American Iron and Steel Institute (AISI) Committee on Framing Standards (COFS), the Structural Building Components Association Cold-Formed Steel Council (CFSC), the Steel Framing Alliance (SFA), and the Cold-Formed Steel Engineers Institute. He is chairman of AISI’s COFS Truss Subcommittee and a past chairman of the CFSEI Executive Committee.

The 2015 CFSEI Annual Expo and Meeting was attended by architects, builders/contractors, engineers and other construction industry professionals. The event provided opportunities for education, networking, and an exposition featuring state-of-the-art innovations, technologies and principles in cold-formed steel framing. This is the only event of its kind dedicated to the cold-formed steel framing industry and is held on an annual basis.

The Cold-Formed Steel Engineers Institute comprises hundreds of structural engineers and other design professionals who are finding a better way to produce safe and efficient designs for commercial and residential structures with cold-formed steel. CFSEI members work together to develop and evolve industry standards and design methods, produce and issue technical bulletins, and provide seminars and online training to improve the knowledge and skills base of engineers and design professionals. For more information, visit www.cfsei.org.