Plaster has been applied for many centuries and in the earliest of times, was applied to a solid surface like a pyramid wall. But there is historical evidence that early man, using mud as a form of plaster, applied it to a framework of sticks and interwoven reeds. This stick and reeds was the first form of what we use today in our plaster environment, that binding framework known as lath.

Our modern forms of exterior lath are an intricate, sometimes artful, form of various configurations of metal. Some are welded into an engineered web, others stamped and expanded to create hexagonal shapes and yet others woven into octagonal nets, all designed to carry the weight of the cement cladding, stucco. Lath performs other functions as well. Yes it primarily holds the weight of the stucco cladding, maintaining the vertical plane, fighting gravity, but lath also works to gauge the thickness of the stucco. To some of us believers, the lath also acts as a sort of spandex for the building, keeping the framework from bulging and twisting all the while maintaining its sleek architectural form.

As with any construction product, technology ever moving forward has born new forms of this lath product utilizing new materials like spring steel and glass fibers, and through the years has been specially manufactured to perform in a variety of orientations. This month’s article will explore the various forms of lath used on the exterior walls and ceilings.

This lath is probably one of the most recognized forms of modern lath. It is manufactured according to ASTM C847 standards. C847 requires a nominal thickness of 1/8-inch, a minimum width of 27 inches, a minimum length of 97 inches, and weights of 2.5 or 3.4 pounds-per-square-yard. It is formed by first manufacturing a sheet of G60 coated metal approximately 12 inches wide (ASTM A653). The sheet is then run through a series of cutters that stamp slits through the metal, and then the whole sheet is expanded, forming a diamond shape void. A self-furring version can be made by running the expanded sheet through another machine which adds dimples to keep the metal lath away from the substrate surface. Self-furring diamond mesh then has a 5/16 nominal thickness requirement. Expanded metal lath may be manufactured with a paper backing as well.

Non-furring expanded metal lath may be used for soffits or ceilings, over open frame. The use of this lath on soffits and ceilings does not require a water resistive barrier, nor should it be applied to sheathing. A minimum 3.4 pounds-per-square-foot lath should be used and it can be directly fastened to the framing members, a cross furring member, or tied to a suspended metal furring channel assembly.

For the wall assembly, expanded metal lath can be applied over open framing or a sheathed substrate surface. The building codes do require a WRB on all exterior wall assemblies. When metal lath is used over open framing the WRB may be given extra support between studs by line wire. This is a time proven process where wire is strung horizontally along a wall and fastened to the studs. The wire fills the void between studs and acts to keep the WRB and metal lath in plane during application of the stucco. Over a sheathed exterior wall assembly, a self-furring metal lath may be used. In this assembly the WRB is placed over the code approved sheathing material and the metal lath is fastened over that to each stud member. The edges of each sheet must overlap the adjacent sheet per ASTM C1063.

Because expanded metal lath is bendable, it can be used for other features and purposes. Metal lath can be formed over foam (not wood) features or architectural embellishments we know as pop-outs. Metal lath holds a bent shape and some contractors have taken to pre-bending metal lath to a given configuration and in large quantities, and then simply fasten them over the architectural shapes, rather than forming them in situ. This is a time proven cost saving procedure commonly used when a large amount of shapes are on a given elevation or building. It is also used to reinforce parapet locations. In the Southwest where parapets are a part of the architectural design, metal lath is bent to form the desired shape and then fastened to the parapet area. The rigidity of the lath helps to maintain some of the structural integrity of the stucco cladding keeping the shape while the stucco is applied.

Expanded metal lath also acts to reinforce smooth or worn surfaces or to provide a “bondable” surface for other products. On tilt-up wall surfaces, expandable metal lath may be fastened to the surface to reinforce the stucco adhesion providing a mechanical bond. It is also helpful when applied over a less than perfect surface, such as adobe, older stucco surfaces, or painted surfaces. Stucco is not really good at adhering to smooth or crumbly surfaces. But, it really sticks like gang busters to metal lath. For other claddings like EIFS, expanded metal lath can be fastened to aging stucco, smooth and/or painted surfaces, and act as a good substrate to adhere the EPS foam. Expanded metal lath has always been the go-to product for interior gypsum plastering.

Woven wire is a popular lath throughout the Southwest region, for both commercial and residential structures. Most rolls have a stiffener wire running the length of the roll which, when the wire is stretched and fastened to the wall, acts as a sort of tensioner. This tension sort of hugs the building perimeter keeping the framing members in a plane which I believe, helps to minimize cracking from building movement.

It is important that the right gauge and dimension be used for each type of stucco cladding. 1-inch 20 gauge stucco netting may only be used for one-coat stucco applications. One may not use this netting for three-coat stucco, ever. Stucco netting manufactured in 1½-inch 17 gauge is used for all three-coat applications, (and in the Pacific Northwest, one-coat applications). This heavier gauge netting may also be used for alternative construction such as straw bale, ICFs, rammed earth and some adobe structures. None of these woven lath products should be used for soffits or ceilings and are not suggested for stand-alone uses on parapets or architectural shapes (see expanded metal lath on the first page of this column).

Welded wire lath is an engineered configuration of minimum .0625-inch galvanized wire electrically fused “welded” together to form a grid of parallel and cross wires. This form of lath cannot have any openings larger than 2-inch by 2-inch (ASTM C933). In the past, welded wire lath was only available in sheets however a new welded lath product available in rolls has recently been introduced. Like its expanded metal and woven brethren, welded wire is available with or without paper backing.

Welded wire lath is a heavier type of lath that is specifically manufactured to maintain a consistent furring from the substrate. Some versions have special horizontal slots in which to place the fasteners. This engineering of fastener locations helps to create a uniform furring level. The lath also has a bit more tensile strength than the other types.

This lath is manufactured with ribs running parallel to each other with a diamond shape lath between each rib (ASTM C847). This type of lath is manufactured with flat ribs or 3/8-inch ribs, is applied to ceilings and soffits and wall spans at 24 inches-on-center. The ribs provide for rigidity of the lath as it spans the rafters which are usually spaced 24 inches-on-center. In the stucco industry rib lath is more commonly used for ceilings and soffits than for walls. Rib lath comes without a paper backing but for stucco spray applications can be manufactured with paper strips attached along the mesh areas to inhibit blow-by. The rule of thumb with rib lath is to use the flat rib for spans up to 19 inches and 3/8-inch ribs for spans up to 24 inches.

Specially treated glass fibers are woven into a configuration of squares and are used as lath for stucco. This type of lath is a relative newcomer to the stucco industry. It was developed as a lightweight corrosive resistant lath that is easy to hang. It also performs well in high salt areas like those along the coastline. ASTM does not publish a report on this lath and each manufacturer must have an ESR report.

The selection of which type of lath to use on a given project relies first on the desired specification requirements, and second on the preference of the contractor. It is common and acceptable to use two or three different types of lath on the same project. The most important consideration of lath selection is that the lath being used be manufactured to proper specifications. 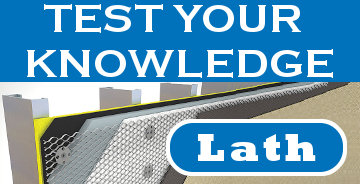