The History of Walls & Ceilings Magazine

W&C has been "The Voice of the Industry" for more than 80 years.

Walls & Ceilings is still going strong from its debut over 80 years ago, and is still considered “The Voice of the Industry” as our trademark proudly notes. From its first publication, under the name Northwest Plastering Industries in 1938, the magazine has always strived to be the resource for the wall and ceiling trade. Originally, the scope seemed exclusive to the plastering and the hawk and trowel trades, then the premiere and most viable wall system used in North America. (Remember, drywall was still in its infancy and used primarily in planes for the war efforts.) But as technology and building trends changed, the magazine morphed with it. Exterior and interior plastering still lives on but the game is much more extensive, with the upward growth of drywall, EIFS, exterior gypsum, metal framing and all that evolutionarily follows.

While there is no question about the subject matter that this magazine has pledged from day one, there does seem some question regarding its ownership and who has published the magazine. BNP Media has kept meticulous archives and records of how the evolution/ownership has changed. There has been some confusion in regards to how the name changed from Northwest Plastering Industries, then to just Plastering Industries and finally its current incarnation of Walls & Ceilings. But from our extensive archives that date from the first issue in 1938 to this present issue, the magazine has always maintained its independence from any association, agency or special interest. The magazine has always been an independent publication. 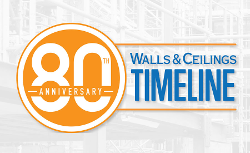 Check out this interactive timeline of the Walls & Ceilings industry!

There are no records that the magazine was owned by or managed by any other existing parties today.

For coverage on our 70th anniversary, W&C sought to interview some of the industry pioneers that were both affiliated as industry leaders back decades ago, and had an existing relationship with the magazine. Several individuals were chosen and hail from different regions within the U.S. As you’ll read in these interviews, these individuals are responsible for bringing new products and technologies across the Atlantic. Many were hired by government agencies to work around the country—as well as the world—on different projects. Cultural influence from regions as well as different countries was infused in the way workers stateside had been working with construction. And of course, many labored long hours in helping get products code approved. To this day, W&C values reporting on new products, both nationally and internationally.

In discussing the history of this magazine, it would be remiss to not spend valuable time on Charles “Chuck” Clay, who first published the Northwest Plastering Industries in the Pacific Northwest in 1938. For three and a half decades, Clay wrote, edited and published this magazine. However, even as its audience grew among the western coast, it still took until the ’80s to find its truly national syndication.

Clay was a journalist by profession and started the magazine up by request of area contractors in the Pacific Northwest. What began as a modest endeavor to serve a regional base of plasterers in that part of the country blossomed into a national publication that is now recognized as a credible voice throughout this industry.

“He started the magazine in the late ’30s here in the Northwest. It was then always out of Seattle,” says Bob Drury, former executive director with the Northwest Wall and Ceiling Bureau, and Clay’s son-in-law. Drury also helped with the magazine on a part-time basis in the early ’70s, helping with layout and other tasks.

According to Drury, the magazine has never been owned by any other entity other than what is recorded in this feature.

The magazine officially changed its name to Plastering Industries in August 1945. This name was held approximately two decades until the name morphed yet again to its final and current name Walls & Ceilings in 1969.

Bob Welch became a representative and western editor for the publication during Clay’s final years as owner of the magazine. When Clay died in 1974, ownership was assumed by his widow, Margaret Clay. Having full confidence in Welch, the magazine moved its headquarters in Washington state to Southern California, where Welch and his wife Ruth began running the magazine. By this time, the magazine was now Walls & Ceilings, as the name implied the shift the industry had taken with other systems, notably drywall, acoustical ceilings and by that point, even EIFS.

“The scope of the contractors changed from plastering to the drywall aspect of the work,” Drury says. “And the name changed. The evolution of the industry went to the title and concept, and content of the magazine.”

“He [Bob] was working for Chuck as the west coast editor. He would go to conventions and Chuck’s wife would go and I would go too. We had some good times there. They were nice people,” says Ruth Welch, Bob’s widow.

“Chuck had cancer and when he found out about it, Bob went up to Seattle every month to put out the magazine for him. That was for about five months before Chuck died. When Chuck died, it was an awful lot to do. Margaret Clay was still involved in it. We bought the magazine from Margaret,” says Welch, who is now in her early 90s and resides in Pacific Grove, Calif.

“He was very dedicated to the magazine,” she says. “He wanted to put out a good, readable magazine and to touch base with advertisers. He was always active with the people in the industry and the advertisers.”

Bob Welch passed in the mid-2000s from complications due to an injury at his home in Pacific Grove. He was last published in W&C in 2000, with his column “The Long View.”

From the careful hands of the Welch’s, ownership of the publication transferred to Lee Rector in July of 1987. This operation, under the direction of Editor Greg Campbell, was owned by Rector for nearly a decade. BNP Media purchased W&C in July 1996. Just prior to BNP Media acquiring the magazine, W&C was perhaps the first construction-based trade magazine to launch its own web site in 1995. For this, we’re very grateful and proud of the foresight the owners’ had of a web-based world to gather information 23 years ago.

“When my father met with the owners of W&C in the 1990s to start the discussion of acquiring the brand, and when he heard the history that included Plastering Industries, we were proud to have such a rich legacy of content that came along with the purchase—not just a brand,” says Taggart Henderson, Co-CEO of BNP Media.

“We were proud to welcome W&C and its exciting history into our family of A/E/C brands. Today, the magazine remains a solid leader in what they do.”

The magazine has seen many faces come and go for its 80 years in circulation. Yet, despite the many names and endeavors of these individuals, we believe under a collective banner that we have held true to its course and have evolved with the times without compromise or sway of a strong focus to serve contractors, distributors/suppliers, manufacturers, builders, architects and engineers on the trends that matter in this fine industry. We are fiercely proud of our longevity and legacy. The magazine is members of all industry associations and bureaus to this industry and we’ve enjoyed relationships greatly with all these institutions, but make no mistake, W&C is independent and will proudly remain so for as long as our resources allow it.

R.L. Reppert Inc.: A History of Talent and Dedication in the Walls & Ceilings Industry

Walls & Ceilings 2015 Contractor of the Year

Generation Next 2018: The Next Wave of Walls and Ceilings Contractors