Avoid under- and over-driving with these helpful tips.

As the near universal standard for covering wood-stud walls, drywall may seem like a straightforward project. There are, however, some mistakes people make with drywall screws. Selecting the wrong ones can cause future drywall pops. Over-driving them can lead to weakened joints. Beyond these damaging errors, there’s also the question whether you’re being as productive as possible during installation.

Nearly all drywall screws available are #6, the measure of the diameter of their threaded area, but their length varies depending on how you plan to use them.

Most common: Use 1¼-inch drywall screws to secure 1/2-inch drywall installed on wood-stud walls. These coarse-thread screws typically feature phosphate coatings, which better protect against rust compared to zinc coatings. Both gray and black phosphate coatings are common but some manufacturers use gray for its product line because it’s less likely to stain due to the oil used in black phosphate.

Less common: To prevent sags, thicker drywall measuring 5/8 inch is used on ceilings. To secure that added weight, use #6 screws measuring 15/8 inch to allow 1-inch penetration into the wood.

Longer drywall screws, such as 2 and 2½ inch are also available. They are used where multiple thicknesses of drywall are needed to achieve fire ratings, such as in multi-family homes and condos.

Automatic For The People

Now that you have the proper screws, what’s the best tool for attaching drywall? Simply put, auto-feed screw systems. These have become increasingly popular both on the job site and with DIYers to save time and prevent the common problems caused by loose screws.

RSMeans, a provider of construction cost data, studied Duraspin auto-feed systems, which are four times faster than screw guns and feature a 5,000-RPM model specifically for drywall installation. RSMeans found the auto-feed systems increased job-site productivity by 31 percent compared to traditional screw guns. In constructing a typical home, that increased productivity translates to over $600 in savings. 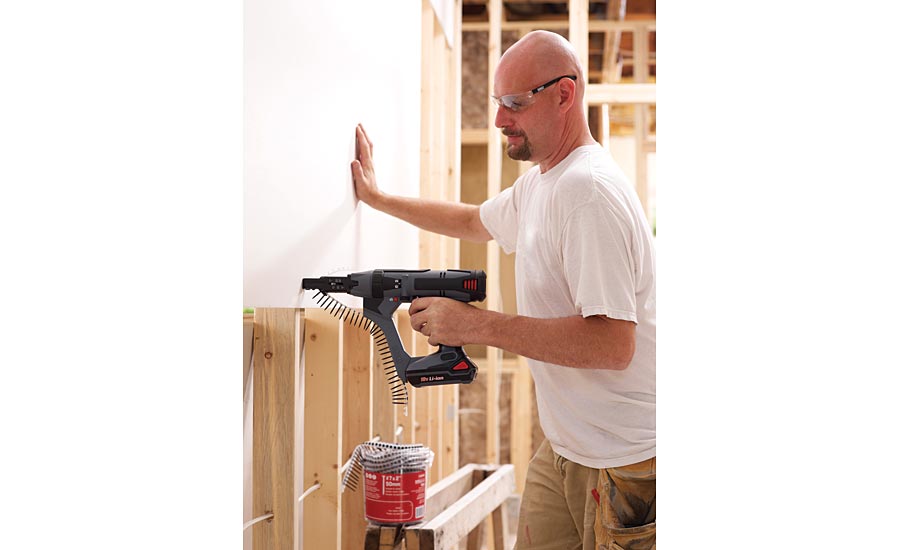 Because they sense depth, some auto-feed systems also give you a perfect drive every time, for unmatched consistency. With traditional tools, you can over-drive screws, ripping holes in drywall’s gypsum material and weakening the joints. Meanwhile, under-driving screws adds extra time as you mud over those mistakes. Depth of drive is critical, and auto-feed systems offer the most precise performance.

Clean-up is easy, since you won’t drop screws.

You won’t deal with metal shavings in your fingers, since you don’t touch the screws nearly as much.

As construction companies cope with the shrinking labor pool, auto-feed systems are critical because they require little training. Workers on their first day can be as productive as experienced hands. W&C

Mike Desmond is director, screw systems and automation at SENCO. Desmond leads product development and commercialization of SENCO’s DuraSpin auto-feed screw systems. He can be reached at mdesmond@sencobrands.com.