UNPACKING SOME OF THE MEANS AND METHODS FROM THE PLASTERER'S TOOLBOX.

One of the benefits of gypsum, lime, and even earthen plasters that have made them a desirable medium of expression for traditional architectural design, is their inherent suitability for replication by mold work. In this article I'll introduce some of the basic means and methods from the plasterer's toolbox that we have at our disposal to make the magic happen!

In Romanesque, Gothic, Classical, and other architectural traditions, much of the expression and articulation of form that makes them readily identifiable begins with molding profiles. For the most part Romanesque (and Islamic) is based on a square root of two geometry, whereas the Gothic is based on a root three, and the Classical primarily on a root five system. As such, a master plasterer clearly needs to have a good handle on Euclidean geometry to develop his designs and layout the knives for extruding his profiles.

A drawing is transferred to a softer metal such as zinc or aluminum and mounted on a wooden jig called a running mold made for extruding moldings. These running molds can be made in all manner of configurations depending on the shape and depth of the molding. In-situ moldings are those run-in place right on site. Typically, for interiors these have been realized in lime plaster with a finish coat of lime gauged with a bit of gypsum. 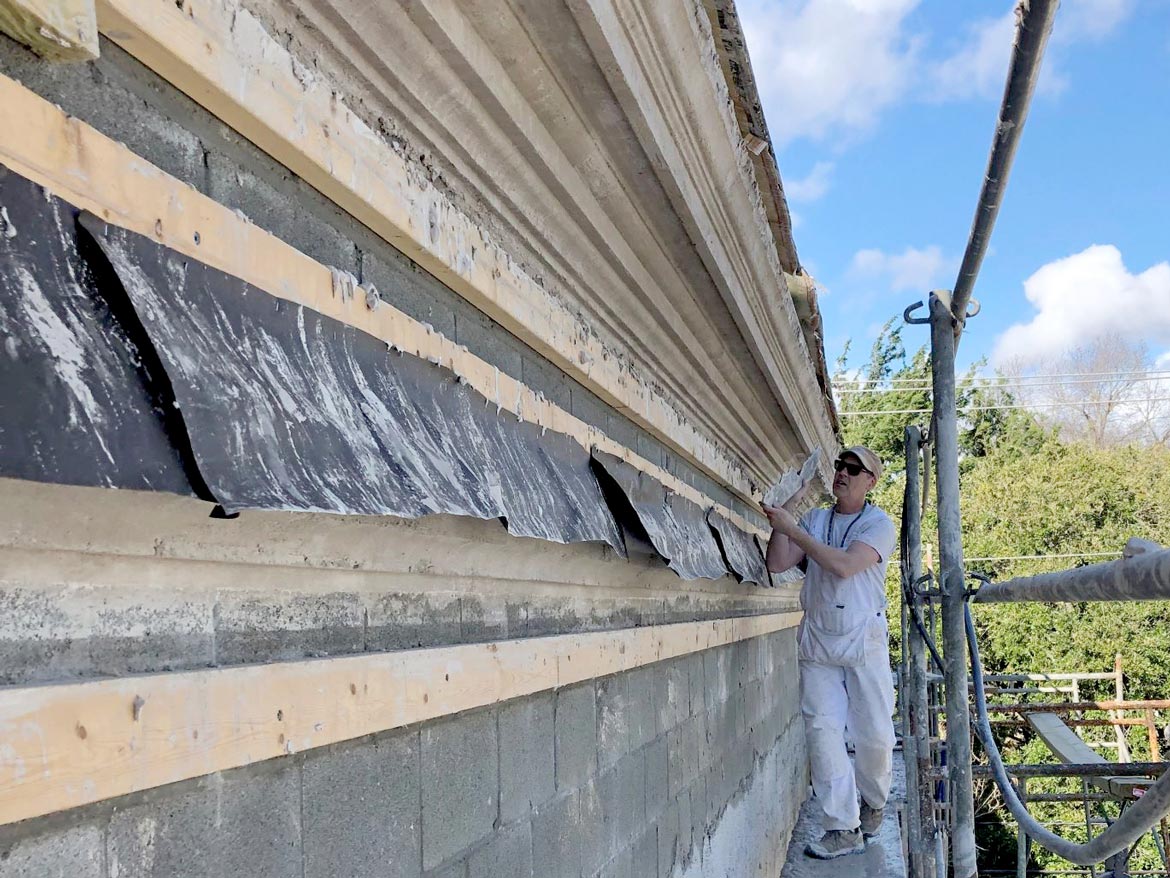 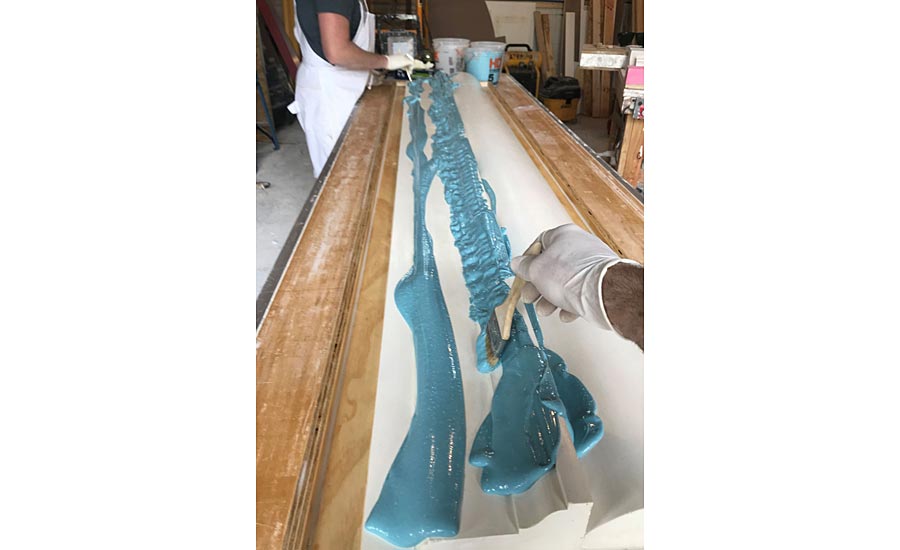 Similarly, hydraulic limes and natural cement are often used in-situ for exterior applications subject to the elements. In-situ run moldings are ideal for long runs as well as complicated geometries found in compound curves such as those commonly encountered in stairwells. In-situ running requires an intimate familiarity with the plaster materials as well as site conditions, and is considered highly skilled work.

Bench run moldings are run on a table in a shop and are made of neat, that is to say pure gypsum, plaster of Paris. Whereas lime plasters need time to cure which suits in-situ work, the rapid set of gypsum is perfect for shop work where one can run multiple moldings in a single day for later transport to the jobsite. As this type of molding is reinforced with some type of hessian cloth (burlap) it is commonly known as “fibrous plastering.” The skills required for fibrous molding are divided between shop productions and affixing the moldings in the field.

Plaster molding installation is quite similar to millwork and the plasterer employs many of the same means and methods of the carpenter. The pieces need to be mitred, installed plumb and level, coordinated with centerlines of the room, door jambs and other design elements. If there is a relatively small linear footage of moldings needed, running them individually might be all that's needed. However, if the profile is complex or the quantities are significant, sometimes creating a model is your best bet. 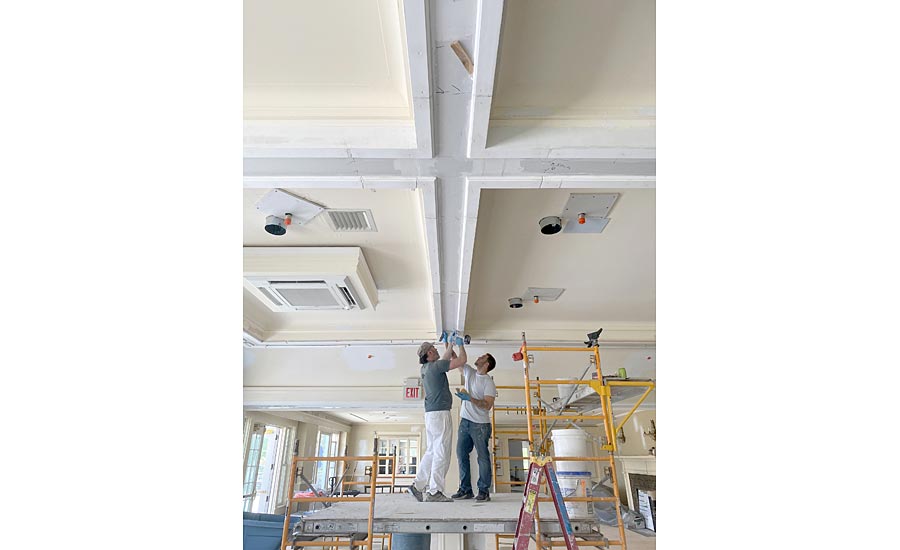 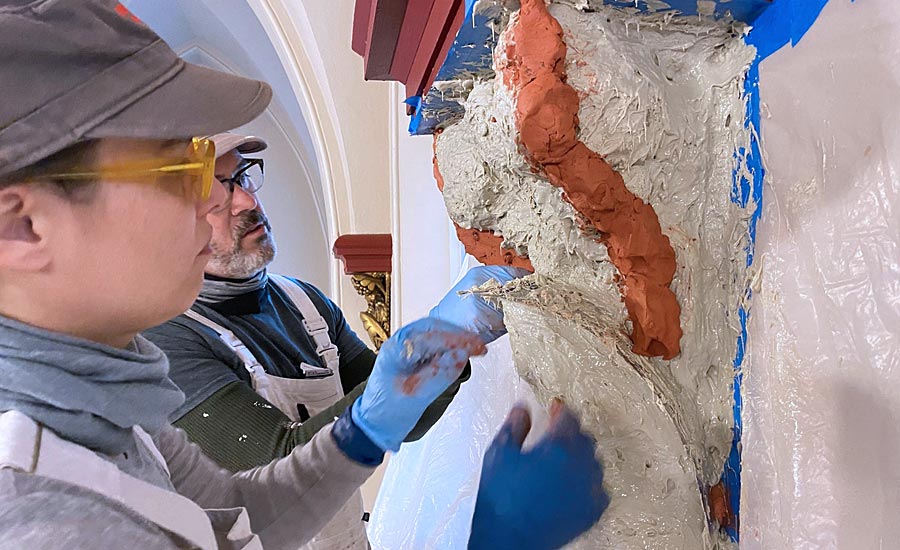 One of the big advantages of making a model is that the time you invest in touching it up to perfection gets replicated in every piece you make from it. A challenge facing fibrous moldings is keeping the pieces from deforming during the manufacturing and drying processes. The general rule is to make the mold as hard as possible that still permits you to demold the piece without undue stress. For relatively simple profiles that don’t have deep undercuts, sometimes this can be accomplished with a plaster “counter-mold.”

A counter-mold is essentially a reverse shape of the mold you intend to produce. After sealing and coating the counter-mold with a release agent, one can cast against the negative shape generating the pieces you need. The big advantage is that, being made of plaster, the counter-mold is literally rock hard and will never deform. Furthermore, plaster is an inexpensive material so counter-molds are economically desirable if the design allows for it.

As it turns out, many if not most molding designs are not well suited for hard counter-molds such that softer materials with a bit of flexibility may be in order. These are called rubber or 'squeeze' molds. In the past, gelatin and wax were options although their fragility and expense led to limited applications.

Since the discovery of rubber trees in the East Indies, natural rubber has been used and greatly expanded the use of cast moldings. Natural rubbers are still used to create squeeze molds in the UK and Europe, having the advantage of being recyclable which cuts down on expense and environmental impact. They do off gas toxic fumes when heated, so adequate ventilation is a must. 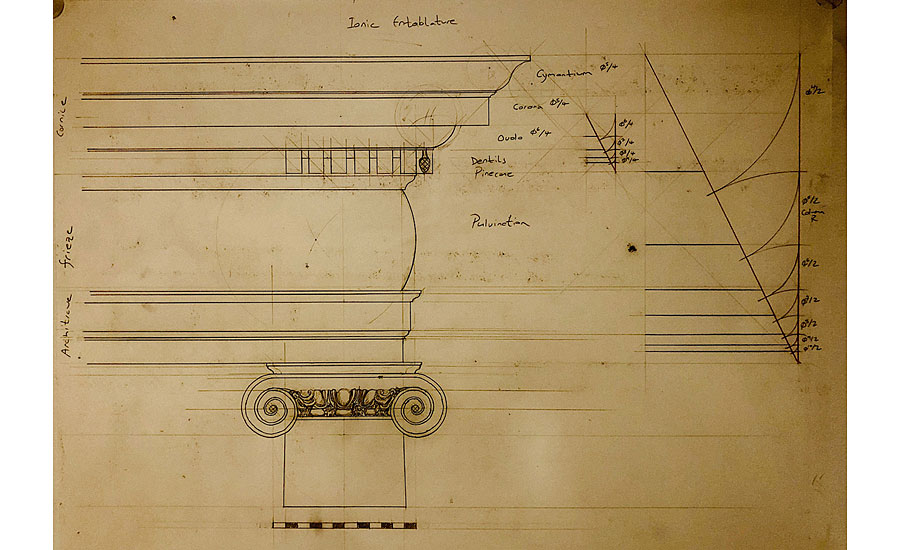 Two-part artificial rubbers based on either urethane or silicone are now widely available. They aren't cheap, so plasterers have developed methods of applying them onto the model that don't extend much beyond the 1/4 inch minimum thickness. Often to keep the rubber from deforming, a hard shell of plaster called a mother or jacket mold is applied to the back of the rubber mold. Artificial rubbers are available as pourable versions or more viscous mixes that are brushable, particularly useful for restoration and ornamental applications. These artificial rubbers are available in a range of hardnesses suited to a given application. As previously mentioned, the plasterer goes with the hardest rubber that the piece will take so as to minimize the risk of deformation.

Where squeeze molds really shine is in ornamental work. Squeeze molds allow the plasterer to leverage the initial investment in sculpture to easily generate many perfect copies. Models of course can be made of plaster but also wood, stone, or modelling clay. Softer rubbers can handle deep undercuts and capture the finest of details, even the faint brush marks of the sealer or release agent. Silicone rubbers in particular are susceptible to bubbles when mixing so it's customary to vacuum the rubber and vibrate the table holding the model when applying the rubber so those bubbles don't attach to the model, leaving imperfections in the squeeze mold that transfer to the cast pieces. Fibrous plaster moldings and ornament can be mechanically affixed to surfaces with screws or 'bedded' in with plaster. Best practice usually dictates a combination of both.

The Art of Plastering

I have to say this article in particular illustrates much of what I love about plastering. It’s both physically demanding labor and a highly skilled craft. It can be an art that requires study of precedents, drawing, and sculptural ability while at the same time, a science that obliges a deep understanding of geometry as well as the chemical and physical properties of the materials of the trade. Essentially, plastering has provided me a satisfying livelihood of making beautiful things for public enrichment.