A GOOD PERFORMANCE SPACE ADDS ITS OWN “FLAVOR” TO THE OVERALL SOUND MIX.

Focusing on performance acoustics goals brings us back to origins. Before the invention of quantitative acoustic measurements, all acoustic design was based on qualitative perceptions and what had worked in the past.

The evolution of stadium design is one good example of this. When trying to address large gatherings, the ancients discovered that while listeners standing only a hundred feet away on level ground could not hear, others standing much farther away but on a hillside could hear perfectly. (The normal drop in air temperature with increasing altitude causes sound to bend skyward as it travels away from its source.) That prehistoric people knew this is clear from the shape of numerous natural and fabricated structures they used for mass meetings.

Since at least the time of Vitruvius, the rules of stadium design have been written down and codified to take advantage of the acoustic efficiency of the elevated listening position. 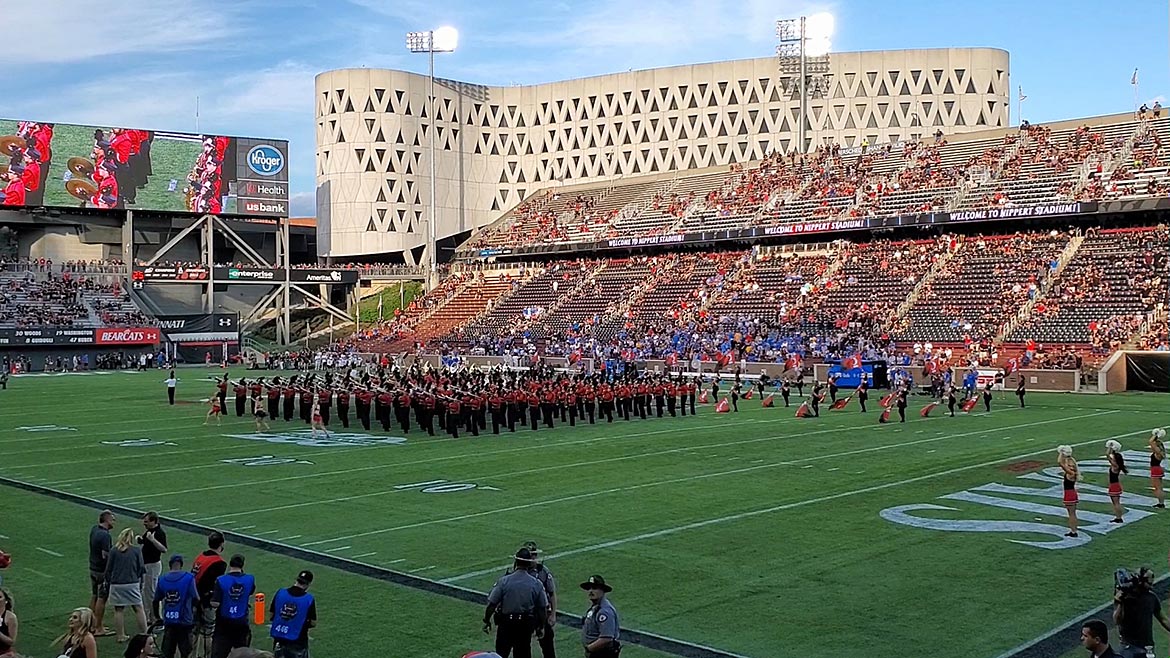 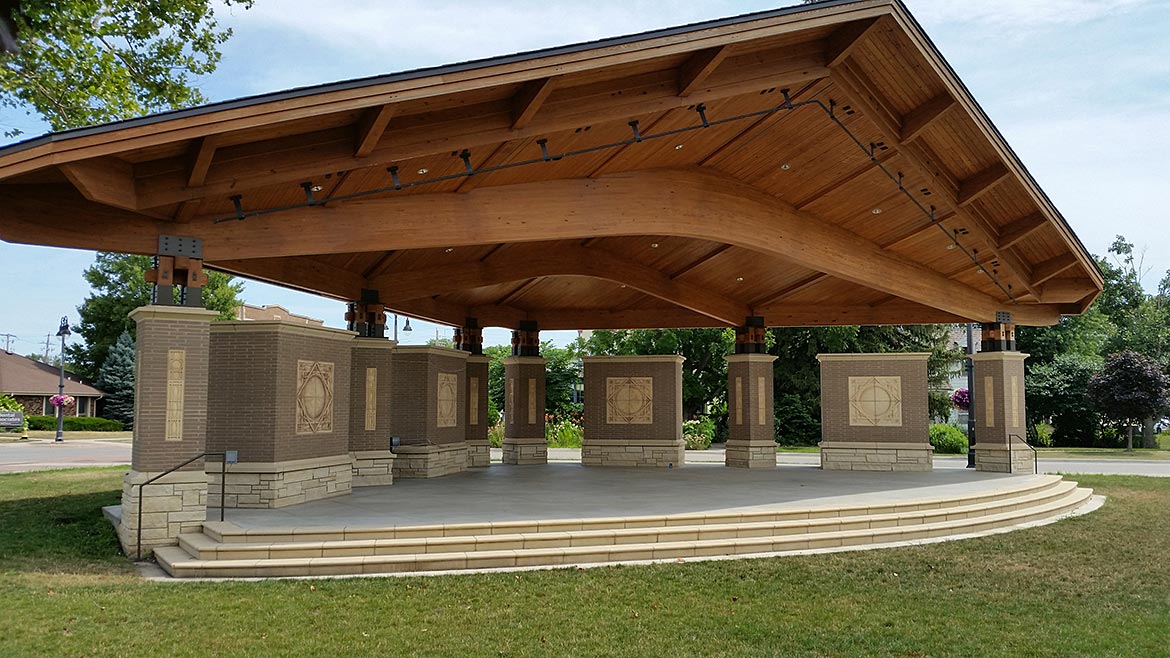 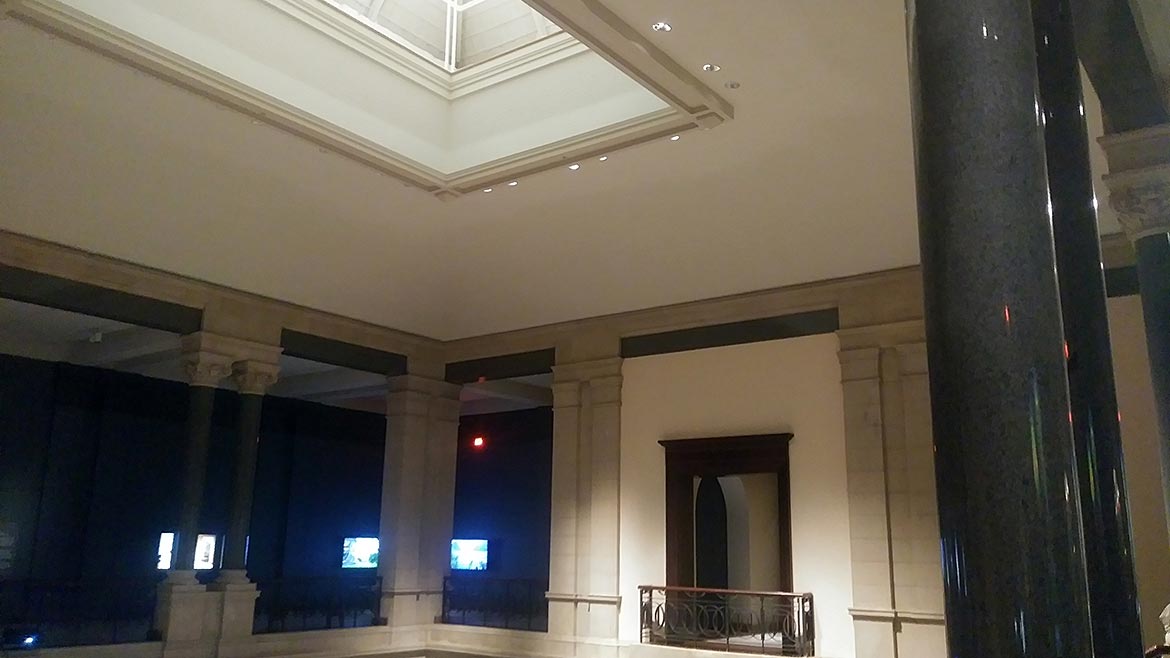 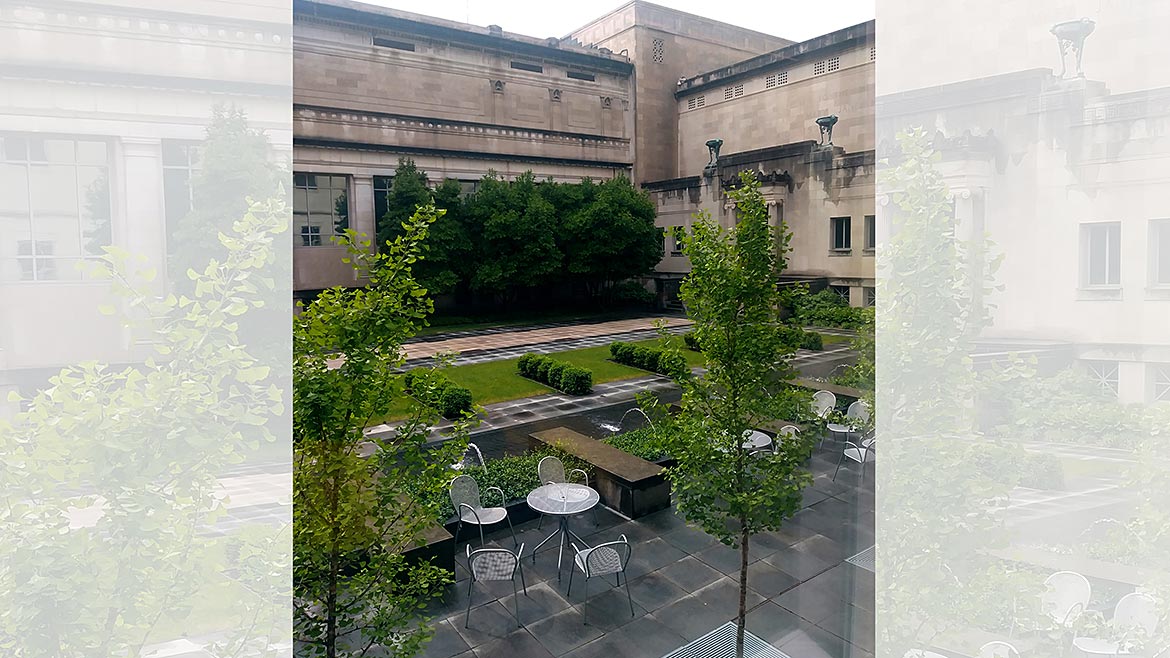 A good performance space is not just efficient at transferring sound energy from the performance source to the listener. It also adds its own flavor (impulse response) to the overall sound mix. Aficionados routinely compare the acoustics of concert halls but even simple, open-air structures have their own unique impulse response that adds to the live music experience.

For example, the Louis Sullivan inspired open bandshell design in Grinnell: Iowa’s Central Park does a good job of first diffusing and then directing sound over the entire lawn seating area. Seemingly, simple designs can also have impulse responses that create unwanted acoustic surprises. Scale model testing of a proposed pixelate-design amphitheater in Westfield, Ind., showed a peculiar dip in its impulse response, causing the orchestra cello section to become undetectable at the conductor’s position.

Good acoustic performance is typically supported by the random placement of small reflecting surfaces close to the performance stage to diffuse sound back to the listeners. 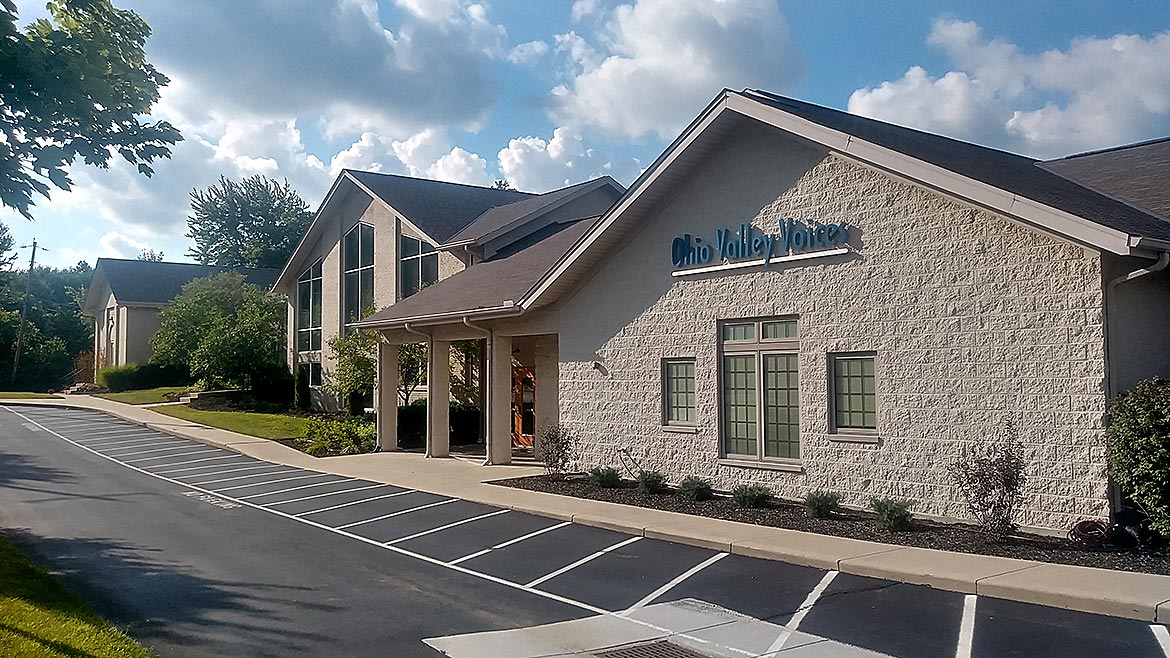 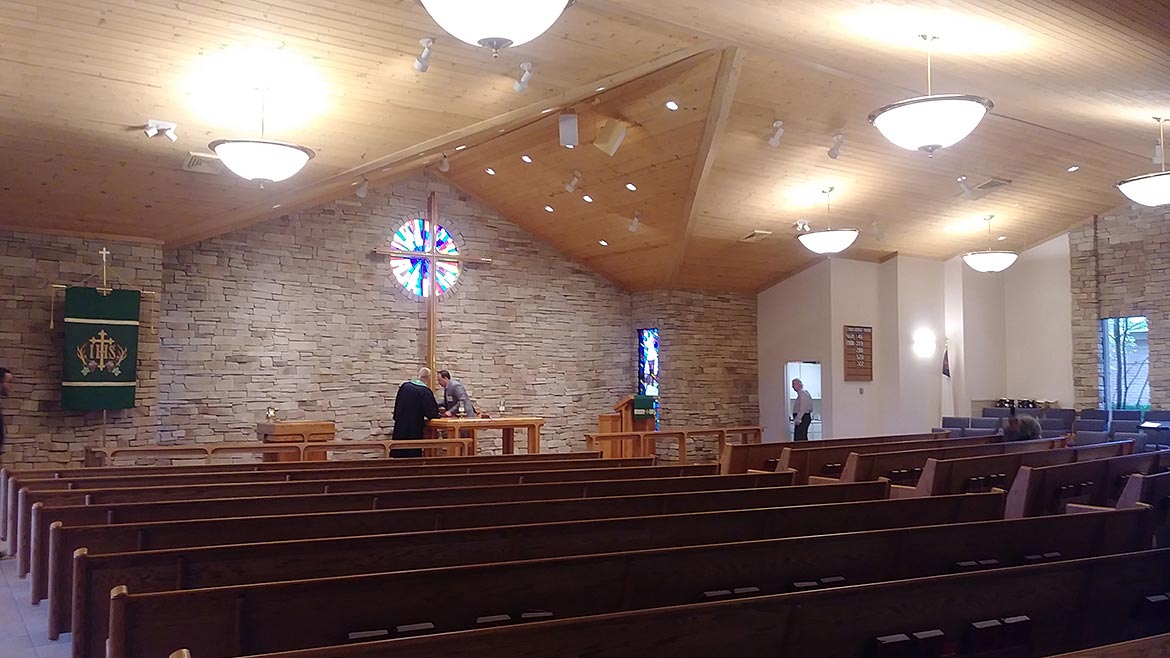 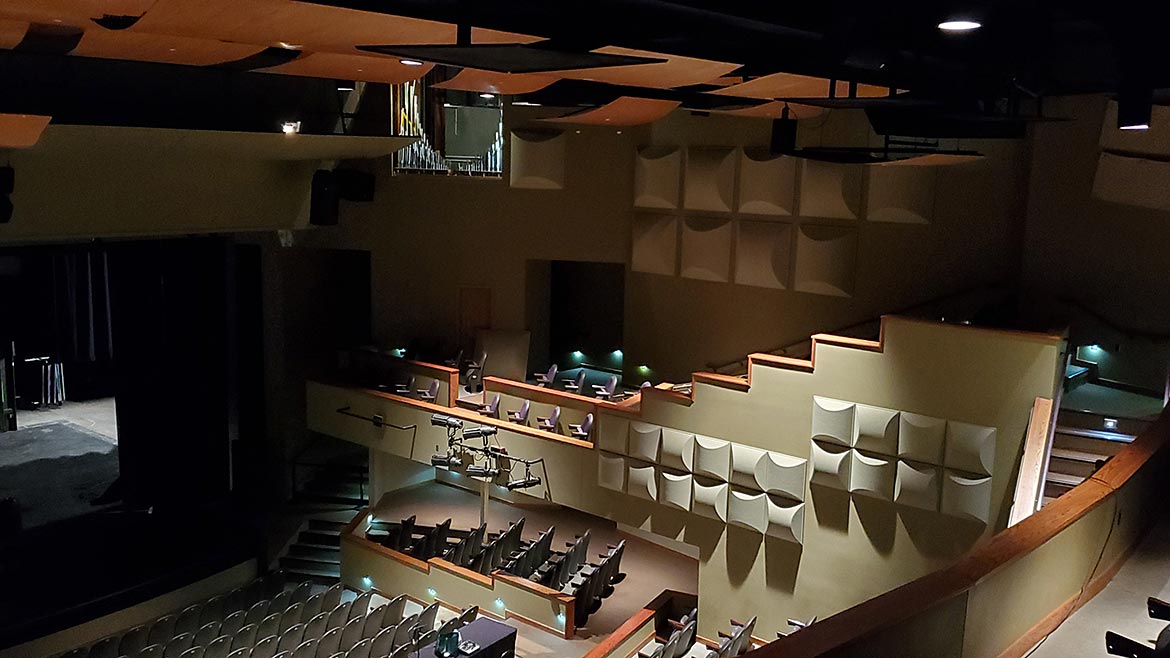 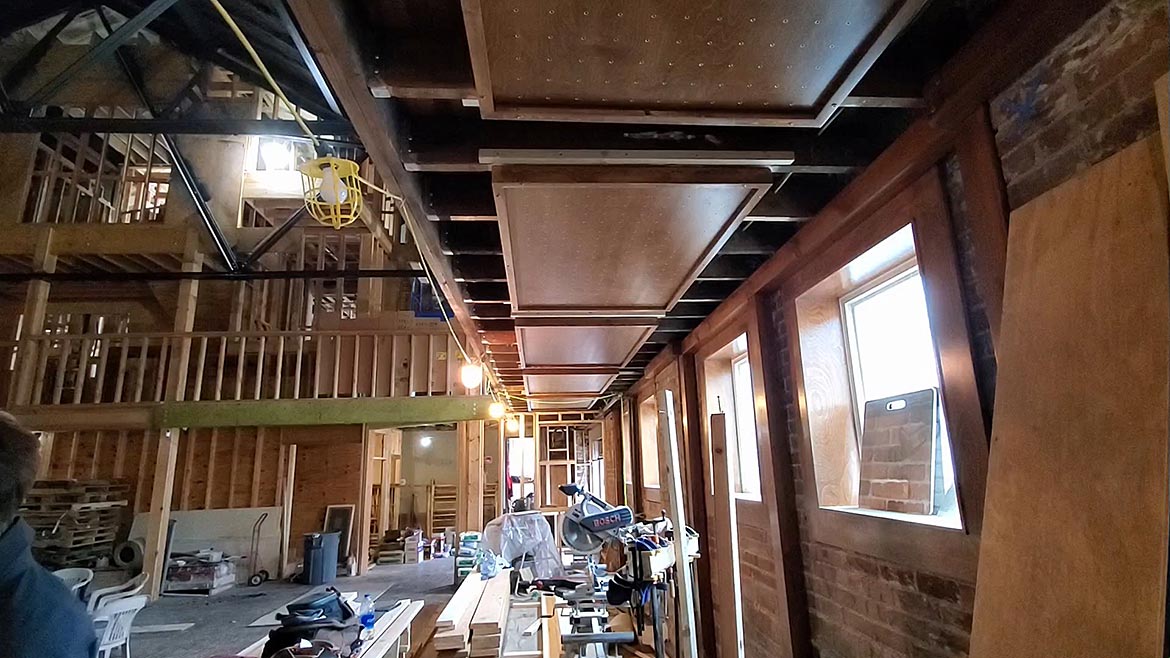 Generally, the more intricate and random these reflecting surfaces are, the more intricate and interesting is the sound. If, however, these reflecting surfaces become larger and farther from the stage, they will produce echoes. This is a main acoustic concern for open courtyards used as performance spaces. Slap echoes bounce back and forth from their parallel walls. Trees planted within the courtyard are not particularly sound absorbing, but they can be used to hide the real acoustic treatments to reduce echoes.

The placement of early reflecting surfaces makes for an interesting impulse response, but the tail end of that response is decided by the sound absorbing characteristics of the room finishes throughout the entire space. For example, tongue and groove wood ceilings and padded wooden pews are common design elements in medium sized churches. Their joint sound absorbing characteristics result in room acoustics that are typically mellow and steady, no matter how many people are in attendance. The Sondheim Performing Arts Theater in Fairfield uses ceiling clouds, wall diffusers and sound absorbers to achieve performance level acoustics for stage and pipes.

As important as the room finish acoustic properties are, they must also match the aesthetics of the performance space. This often calls for hiding acoustic surfaces in plain sight. Although the walls, columns and floors of the Cincinnati Art Museum are hard plaster, marble and stone, several of its monolithic ceilings are actually sound absorbing.

Some room finishes may only look acoustical to match expectations. The massive ceiling clouds within Springdale’s Vineyard Church appear to be shaped and angled according to some complicated acoustic formula, but they are simply there to look impressive and to hide the real acoustic treatments located above.

Computer generated acoustic simulations helps to put it all together. For the last 30 years, the ability of the acoustics consultant to create realistic sounding acoustic simulations of music and voice performances in yet-to-be-completed projects has allowed clients to listen and make those qualitative judgements that are absolutely necessary for successful performance acoustics design. Although average acoustic goals can be figured out from historical preferences based on the size and type of project, simulations allow each client to fine tune the acoustics to their personal expectations and perceptions.

For example, after listening to acoustic simulations, Xavier University music department faculty members had interestingly divergent points of view for the desired acoustics of Long Recital Hall. The chair and others on the team favored a hall with minimal acoustic support; to challenge and develop strong performers. Other team members favored a hall with fully supportive acoustics. Still, others argued for acoustics that could be adjusted between the two extremes. The compromise was a recital hall having a moderate, flat reverberation spectrum with few early reflections. Some adjustment is possible by the positioning of curtains covering large glass curtain walls on each end of the hall.

This ability to fine tune the acoustic design of performance spaces to match the perceptions and preferences of individual listeners proves even more valuable when the perceptions of those listeners are vastly different from the norm. The acoustic performance of the music and auditorium spaces serving the Ohio Valley Voices School for children with cochlear implants was found by listening to acoustic simulations of the rooms through a cochlear implant simulator developed by researchers at University of Granada, Spain.