If you’ve ever designed an overhang to protect a window, you have been confronted with the question of how far should it extend. It seems like a simple enough question, yet the factors to consider lead to ever more questions:

...which way does the window face?

...how much of the window should be protected?

...how is the overhang length related to various Sun angles?

At first blush, one may presume that the highest Sun angle above the horizon during the equinoxes (March/September 21) would generally inform an overhang length in order to provide shading for the warmer half of the year. Such simplistic criteria would generally hold true for only a south-facing window and may overlook critical needs for shading and/or solar access in a specific project scenario.

For a window at any orientation, the angle above the horizon that should govern an optimized overhang length is called the Profile Angle.

As described by the glass manufacturer Pilkington, the Profile Angle is the angle between Normal to Window and the rays of the sun perpendicular to the window plane. As noted by the company, the Profile Angle must be determined in order to compute position and dimensions of shading devices.

With the exception of solar noon for a south-facing window, the Profile Angle will vary from the altitude angle (i.e., the angle of the Sun above the horizon from a specific location). For the same degree of window protection, the Profile Angle changes dynamically with the Sun's movement in the sky throughout the day, month, and year. 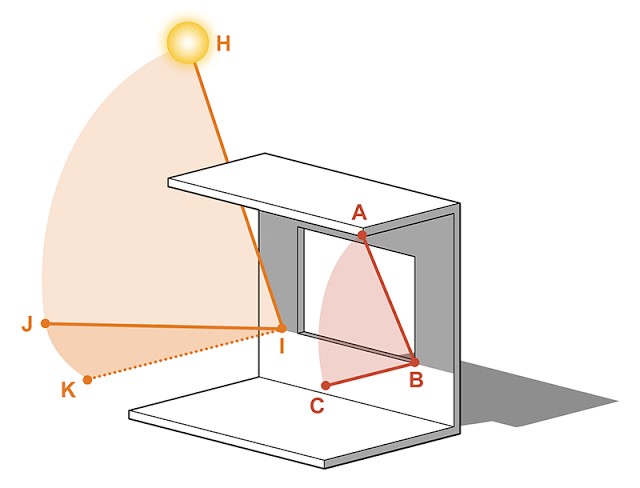 The Sun Angle Calculator Instruction Manual defines "True Altitude" as "the angle between the Sun’s rays and the horizon and Profile Angle as the angle between Normal to Window and the rays of the sun perpendicular on the window plane." The illustration above may help to visualize these angles and their differences in relation to a south-facing window.

Angle H-I-J is the Altitude angle (above the horizon).

J-I-K is the Azimuth angle (East or West of True South).

I-B identifies the horizontal axis in the plane of the window where shading is to be established.

A-B-C is the Profile Angle. 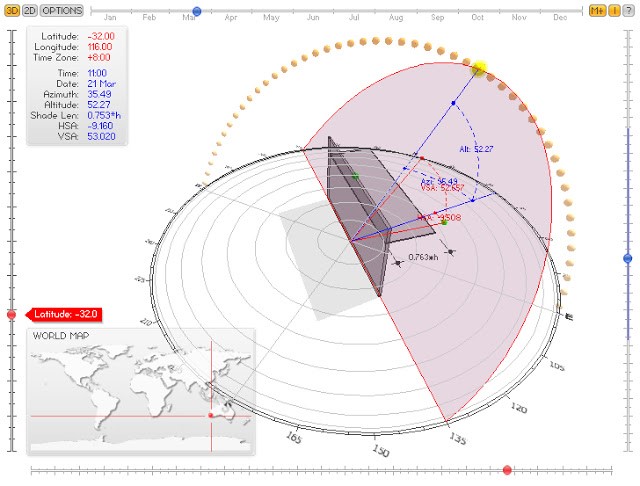 Dr. Andrew Marsh offers a Java-based applet to demonstrate the how horizontal and vertical shadow angles (HSA & VSA) change with different dates, times and location, as well as the orientation and tilt angles of the surface. In United State, the VSA is typically referred to as the Profile Angle.

In application, be mindful that direct exposure to the Sun can be an asset or liability. It is up to the design team to determine when solar access is desired and what the optimal length of protective overhangs should be.

Daniel Overbey is the Director of Sustainability for Browning Day Mullins Dierdorf Architects in Indianapolis. His practice and writing focuses on high-performance building design and construction, environmental systems research, LEED-related services, and energy modeling. He has been published in High Performance Buildings,EcoBuilding Pulse, Environmental Design + Construction, as well as other trade publications and media outlets. Overbey is also a building science educator at Ball State University's College of Architecture and Planning and the Boston Architectural College's Sustainable Design Institute.
You must login or register in order to post a comment.

A Day in the Life

In the new year, project teams committed to...

This is such a inspiring story. Every story...