The Gypsum Association’s Building Code and Technical Committee reviews the organization’s technical publications on a regular basis to ensure that document content keeps pace with product development and usage. The review process also makes certain that the most current version of each association-sponsored document displays a timely date and that the document text reflects contemporary building code requirements.

While most organizations have a regular document review schedule, the Gypsum Association, with a handful of exceptions, does not. Experience has taught us that tying documents to a rigid modification schedule can inappropriately delay action on an important issue. We prefer to discuss needed changes as they arise and take appropriate action as soon as possible.

In addition, nearly all of the documents we produce are published only in electronic format, so updating text is a relatively simple process. When an issue with the content of a document is identified the relevant text or diagram is reviewed by the committee and, if appropriate, an updated edition is created. If a document has not required a content modification for a significant period of time, generally about ten years, the committee will review it and re-issue it with a contemporary date.

EXCEPTIONS TO THE RULE

There are three exceptions to this review process schedule. Two exceptions are the primary documents produced by the association: GA-216, Application and Finishing of Gypsum Panel Products, and GA-600, Fire Resistance Design Manual, both of which have defined three-year review cycles. Given the significant quantity of fire and sound tests that are produced by industry participants and the subtle but often significant, modifications to application specifications that are created by the release of new gypsum panel products, both documents could be re-issued every year. Because that would be impractical, both for document users and association staff, a prescribed review cycle for each document was instituted about 25 years ago. The review cycles for each document are not concurrent; a new edition of GA-600 is released approximately one year prior to the updated edition of GA-216.

The third exception to the standard review pattern is GA-214, Levels of Gypsum Board Finish. GA-214 is unique in that its content is the responsibility of a consortium of five industry organizations. It also is one of the three technical documents that bear an association identification number that is printed by an outside vendor; GA-216 and GA-600 being the other two documents.

Updating GA-214 is nearly always a protracted exercise. Because it serves five masters, the document modification process often requires several draft iterations and can last for years. In the 1990s, the process to update the first edition took more than four years.

It is a common misconception that the Gypsum Association controls the content of GA-214 because we print it and it bears an organizational identification number. In 1990, The Gypsum Association agreed to print the first edition of GA-214 and has never abdicated the responsibility. It bears an association identification number for convenience; however, given that its content is the responsibility of the consortium it is not an “association document.”

In 2012, the committee reviewed a number of association technical documents. Four have recently been released. The most significant is the 2013 edition of GA-216.

No modifications were made to any of the diagrams or charts in GA-216; however, there were a number of changes to the text. These include:

Section.4.7.3 has been modified to more clearly define the requirements for control joints in interior ceilings. The new language directly addresses suspended and direct applied ceilings.

Information was added to Appendix section A.3.4 to more clearly define the requirements for painting or texturing gypsum panel products. The new text reinforces the distinction between the two finishing processes and it includes some additional language for panels that are to be finished with wallcoverings.

Appendix A3.6 now clearly states that gypsum panel products that are to be covered with ceramic tile are not to be skim coated with joint compound.

A number of minor changes to the text were also included in the update. The specific changes update titles for standards referenced by GA-216, and clean up some formatting issues.

Two other documents, GA – 236, Joint Treatment under Extreme Weather Conditions and GA-610, Fire Resistance Provided by Gypsum Board Membrane, were modified slightly and released in a 2013 edition. 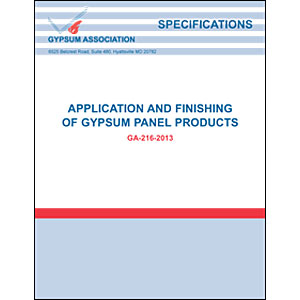 Minor editorial changes were made to GA-236. The primary reason for the 2013 edition was to permit the document to be issued with a current publication date. GA-610, on the other hand, had been technically updated and re-issued in 2012. The 2013 edition of GA-610 reflects a simple editorial change to incorporate a reference to Canadian testing standards.

Because the document had not been updated, portions of it were outdated. The existing version did not reflect modifications inserted in building codes in the past decade that preclude the use of water-resistant gypsum board in bathroom wet areas, and the text referenced a consensus standard that is no longer available. In addition, like GA-236, the document also needed a more relevant date.

The 2013 edition of GA-230 now fully reflects contemporary building code mandates that address the use of water-resistant gypsum board and the references to the standards addressed by the document are fully updated and clarified.

It’s all important information for those involved in gypsum contracting and it can all be read or downloaded for free. To find the documents described, and many more, access the publications section of the Gypsum Association Web site at www.gypsum.org.

GA to Update All Code-Reference Documents in 2021

Association of the Wall and Ceiling Industry International (AWCI)