In the city that never sleeps, corner trim can be found throughout all New York’s boroughs. In one project in Queens, loads of paper-faced bead is used on a shopping mall in the Bay Plaza Shopping Center. The drywall subcontractor for this project is Island Acoustics of Bohemia, N.Y.

Island Acoustics serves the Tri-State community by providing acoustical ceilings, drywall and carpentry services. Since its incorporation in 1969, the subcontractor has grown and evolved into a provider of a broad range of services including drywall, acoustics, specialty ceilings, exterior panel systems and more. Its 20,000-square-foot-facility adjacent to Islip Mac Arthur Airport is located in a 100-mile radius of its office.

“Radius soffits and high ceiling work are the areas of the work that most interest me,” says Union Drywall Taper Foreman/Field Supervisor James Damson, of Island Acoustics.

Damson got in the trades working with a neighbor in his teens and then worked his way into becoming a union journeyman, where he is now a member of the NYC Drywall Tapers and District Council No. 9 Local 1486. He now supervises a large staff of workers on the job site (the subcontractor has approximately 250 employees).

“For the ceilings, [the owners] were looking to create a wood appearance in a sustainable metal ceiling look,” says Damson. “We were able to achieve this with a printed wood appearance on a metal surface. We utilized a No-Coat bead providing clean crisp corners at various soffits and fascias.”

Elsewhere in Manhattan, Emerald Drywall Finishing Corp. spends a lot of its time doing finish work. Based in New York, the husband and wife duo Brandon and Denise Clare are drywall finishing contractors that perform all Levels of Finish throughout the city. The company, which employs 70 workers, is a union shop that does mud and finishing “straight up,” says Brandon Clare.

Clare, who has been a drywall finisher since 1986, started EDFC back in 2009. Although New York certainly lends an advantage to the level and amount of work, Brandon still says the recession didn’t impact the company.

“Business is booming in New York,” he says, noting the company spends a lot of time in Manhattan and Brooklyn. “We tripled our business in the last year.”

Commercial-residential high rise buildings are EDFC’s current bread and butter and is keeping the finishing contractor all throughout the city with several projects that will bring them easily into the next year.

Most projects the company gets the contract for are Level 5 finishes. So, Brandon is very adamant that the company use quality products. He cites that he likes working with USG and National Gypsum’s joint compounds. The company does employ spray machines as well.

“We got three Graco’s, one Titan,” says Brandon. “We use the Graco one with the hopper on it. We run the continuous flow tools through there so that machine works well.”

But when asked about the type of cornerbead system he prefers, there is no hesitation: paper-faced trim.

Over in the Heartland, United Drywall Inc. is a contractor operating out of Anamosa, Iowa. The contractor does both residential and commercial construction. United does drywall (hanging and finishing), steel framing, ceilings, insulation and more. The company began in 2005, during the boom years. 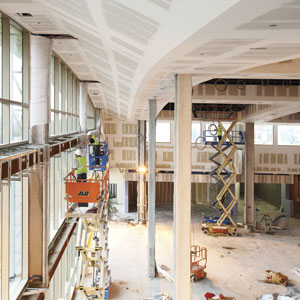 Its Co-owner Todd Boone has been working in construction since 1990. Today, the company is still going strong.

“After our first three years, we worked hard to maintain our relationships with our customers when we had the slowdown,” Boone says. “Us taking care of our customers really helped [pay off during the recession].”

Building relationships with his customers and being involved with their projects is what Boone finds most interesting about the work.

To build more relationships with builders and be the guy they call when they need drywall work performed is what United Drywall’s consistent day to day goals are. To help the company achieve these goals, again Boone says that the quality of products it uses will help them achieve a more successful and profitable operation.

“The products I’m impressed with are products that can help with productivity and decreases the likelihood of a callback,” Boone says.

“We have not had a callback for any of the … trim we have installed since we started using No Coat in 2008,” Boone says. “In fact, it has been brought up with one of our residential customers (who build 30 to 40 homes a year and use 150 to 175 sticks per home) that since we have used it we have had absolutely not one issue with the bead.”

The company is a family operation and Strawser is joined by his two sons, John and Mike, and Jeff Hudepohl. Responding to market demand, the company expanded into other regions in 1990. Valley now operates offices with a full staff in Columbus, Dayton, and Toledo, Ohio.

Before the recession, the subcontractor had grown an average of 12 percent a year since 1981 until 2008, when things slowed way down. Today though, the company feels very optimistic and excited about the future.

“[Things have been] very strong as of late we have been very fortunate to have secured some very large projects for this year’s back log,” says Vice President of Operations Marcus Taulbee.

Part of Valley Interior Systems’ success has been how much it has embraced technology and new tools. The company recently invested in Grabber’s PanelMax drywall milling machine. It’s also kept an open mind over the years.

He says corner trim products have reduced callbacks because there is zero edge cracking/damage from other trades. Taulbee adds that the quality is better which reduces any punch list items.

“Every time I can, I up-sell the product line,” he concludes. “It is an easy sale for us.”

Pete King Construction Co. is a steel stud framing, drywall hanging, finishing and painting subcontractor based in Phoenix. The company has been in business for 65 years servicing the greater Phoenix area in Arizona.

Providing a place of work that appreciates and values each and every worker has been a core philosophy of founders Pete and Jerry King, and remains a top priority in the company today. The subcontractor is committed to providing a safe and reputable place.

“The landscape of the construction industry has changed dramatically over the years,” says President Jeffrey King. “Our ability to ‘get the job done,’ meet schedules, and adapt to changing conditions has afforded us the privilege to participate in many of the marquee projects that have been built in Arizona. We have always enjoyed a solid reputation that has placed us among the best in the industry and has allowed us to partner up with some very reputable general contractors.”

According to the company, business has picked up in the last year.

“As anyone in the trade can attest there has been some really slow times,” King says, adding that the company is on track to have a great year. “We have been gaining ground. And we are always trying to improve and stay ahead of the competition.”

When it comes to new products on the market, the company is always a bit skeptical. It seems the corner trim that has been discussed in this article passes the test, in a big way.

“It has been really hard to impress me with any product as most of them end up as a gimmick at best,” King says. “With that said, it is really difficult to wade through all the new things shown to me and not be tainted when it comes to anything. The most impressive item will sell itself.”