As a result of continuing growth, REGENXBio, a leading clinical-stage biotechnology company based in Rockville, Md., recently relocated to a new headquarters building that allowed it to expand its labs and consolidate its office space. According to Interior Designer Lindsay Casey of Ewing Cole in Philadelphia, company management was looking to create a state-of-the-art facility that showcased their science while allowing for continuous operation of offices and labs.

To meet that need, numerous glass walls were installed to connect the labs to the offices. Management was also looking to create a dynamic interior surface in the facility’s main lobby and centrally located lounge areas. Excellent acoustical performance and a clean, modern, monolithic visual were also part of the design requirements.

To create the desired dynamic surface, Casey and the design team chose to install a series of ceiling clouds that provides the look of drywall but performs like an acoustical ceiling. Finished panels feature a smooth, monolithic visual to meet the needs of those who desire the appearance of a drywall ceiling but also require effective acoustical performance.

Casey notes acoustics were especially important in the lobby and lounges because of all the glass walls and other hard surfaces. “The clouds are the only absorptive surface in those spaces,” she says. The ceilings achieve a Noise Reduction Coefficient of up to 0.80, indicating they absorb up to 80 percent of the sound that strikes them. “The staff is quite happy and pleased with the acoustics,” she adds. 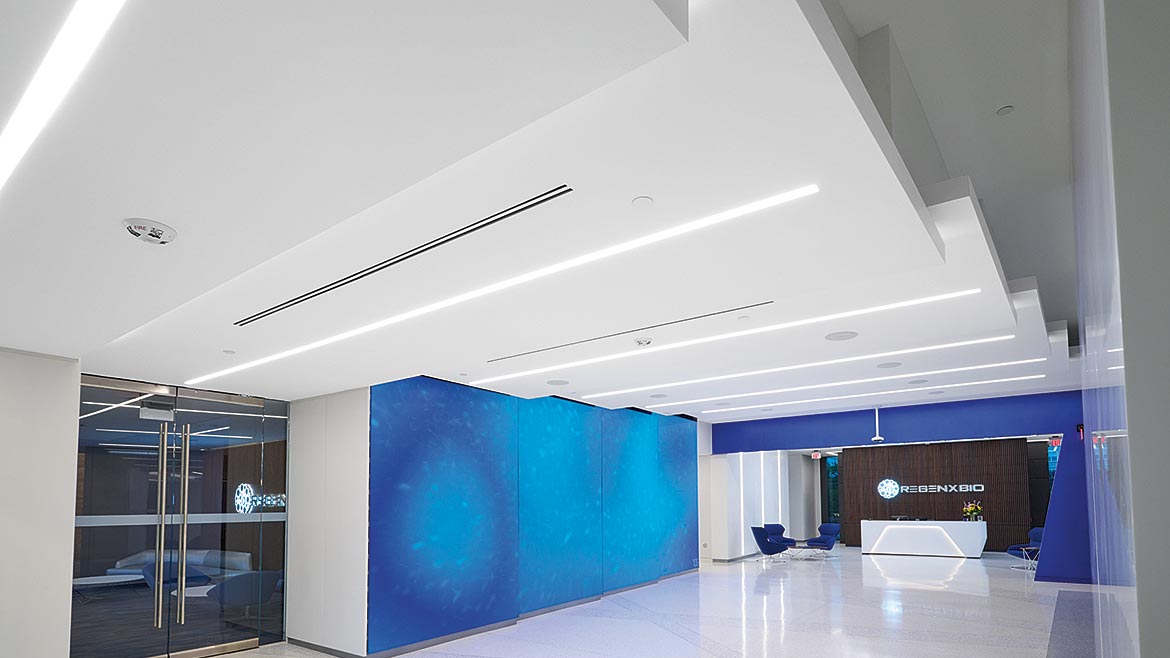 All the clouds are sloped and overlap each other approximately 2 feet. The result is a visual rhythm that draws visitors into a space.

A total of 21 clouds were installed in a variety of sizes and shapes. The smallest was approximately 6 feet by 16 feet in size and the largest approximately 11 feet by 27 feet. All the clouds are angled and overlap each other approximately 2 feet. The result is a visual rhythm that draws visitors into a space.

“The clouds create a kind of wayfinding element that draws visitors into the lounge areas,” Casey says. “They impart a really strong visual and are not as static as a flat ceiling. The ceiling also provides the look of drywall we wanted but is acoustically sound.”

She also reports lighting was not a problem. Recessed linear lighting was installed in the clouds and cove lighting in the trim. “Installation was pretty straightforward and simple,” she states. “The clouds did not limit the type of lighting that could be installed or their location. They offered a great deal of flexibility.” 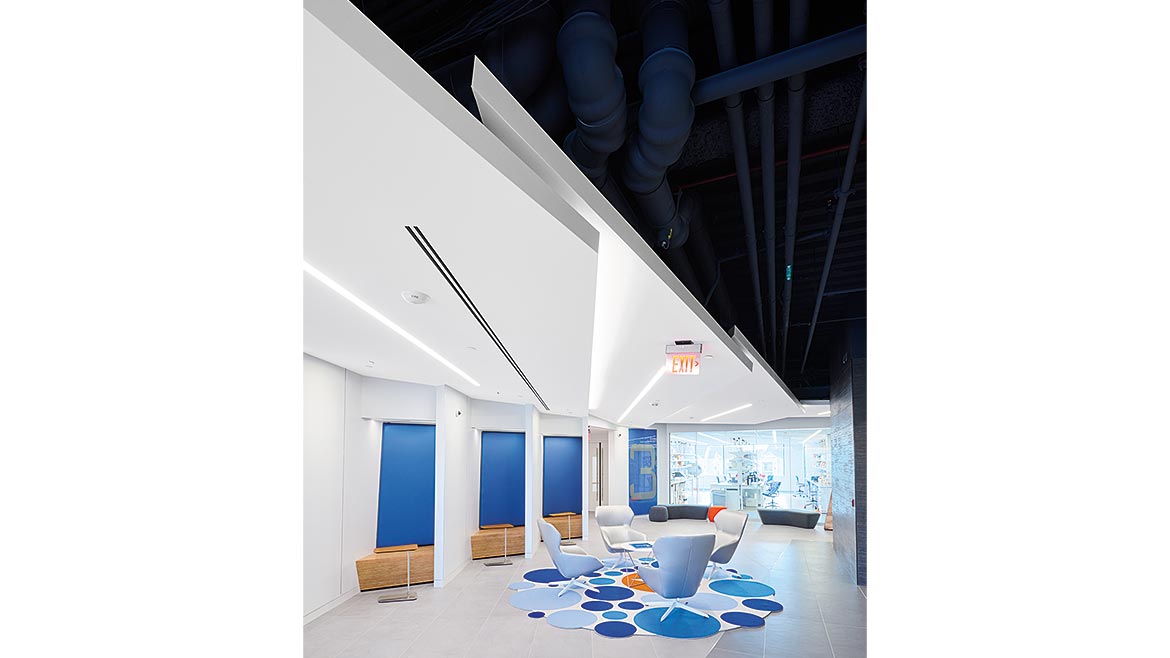 In terms of installation, Casey notes everything went smoothly. “There were no issues,” she says. “Probably because it was so similar to a gypsum ceiling installation.” All the clouds were installed on a drywall grid system. Specialty trim from the manufacturer was used on the edges.

According to project manager Kiersten Kaplan of DPR Construction in Columbia, Md., this was the first time his crew installed a ceiling of this design. “When we first saw it, we knew this was going to be both fun and awesome as well as really difficult,” he says. “All details had to come together.” As a result, numerous coordination meetings with MEP partners were held.

“There were no access panels, so access to certain utilities was prohibited and much had to be redesigned in order not to change the aesthetics,” Kaplan adds.

Precise integration between components and the ceiling became critical. For example, linear lights and linear air diffusers had to be installed with enough space to properly add structural components to maintain the slope in both directions. Installation of the drywall grid system was also critical. “When you have linears running the length of the cloud, you have to make sure the installed grid is completely stable,” Kaplan states.

Looking back, Kaplan believes the ceiling clouds are the best-looking feature in the building. “Considering all the shapes and sizes that were involved, our crew really put it all together.”