The Air Barrier Association of America worked with Oak Ridge National Laboratories to conduct assembly testing on a wood-framed wall to determine the gaps, cracks and holes that would leak the most. The testing was conducted at Tremco’s facility in Cleveland, where they have a fully automated test apparatus to conduct an ASTM E2357 Standard Test Method for Determining Air Leakage Rate of Air Barrier Assemblies. The funding to ORNL was supplied by the Department of Energy Building America Program.

This research was an extension of the ABAA Research Project on Air Barriers, which was to determine whether there are energy savings when you make a building very airtight. 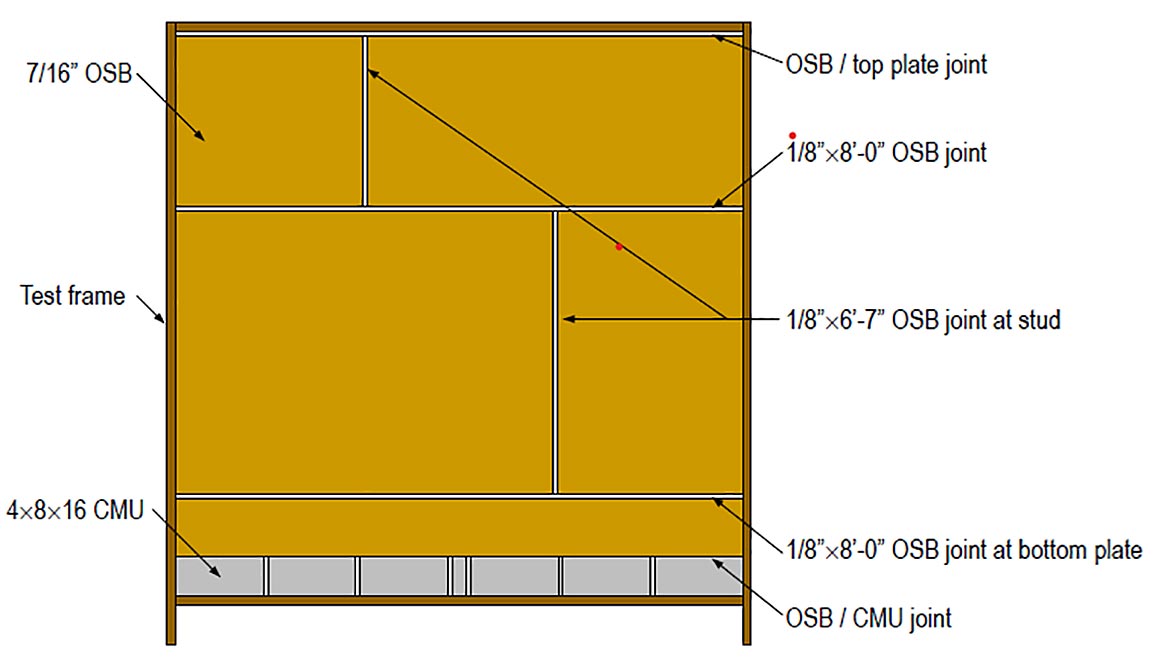 The baseline specimen was a more detailed ASTM E2357 test specimen, where the wall was purposely made very leaky. The specimen was framed in a wooden buck for ease of mounting into the test apparatus. A foundation was simulated with CMU and a wood mud sill was installed with spacers between the mud sill and the CMU to represent typical site conditions. Simulated floor joists with a header was then installed, and then a strip of subfloor was installed. The subfloor was shimmed to replicate the drying and movement of wood framing members on the construction site. A wall was then framed using two-by-fours with a single bottom plate and a double top plate. The wall was sheeted with OSB. A 1/8-inch gap was maintained between the sheets of OSB, which is a standard practice on job sites to allow for the expansion and contraction of the material due to temperature and moisture content. 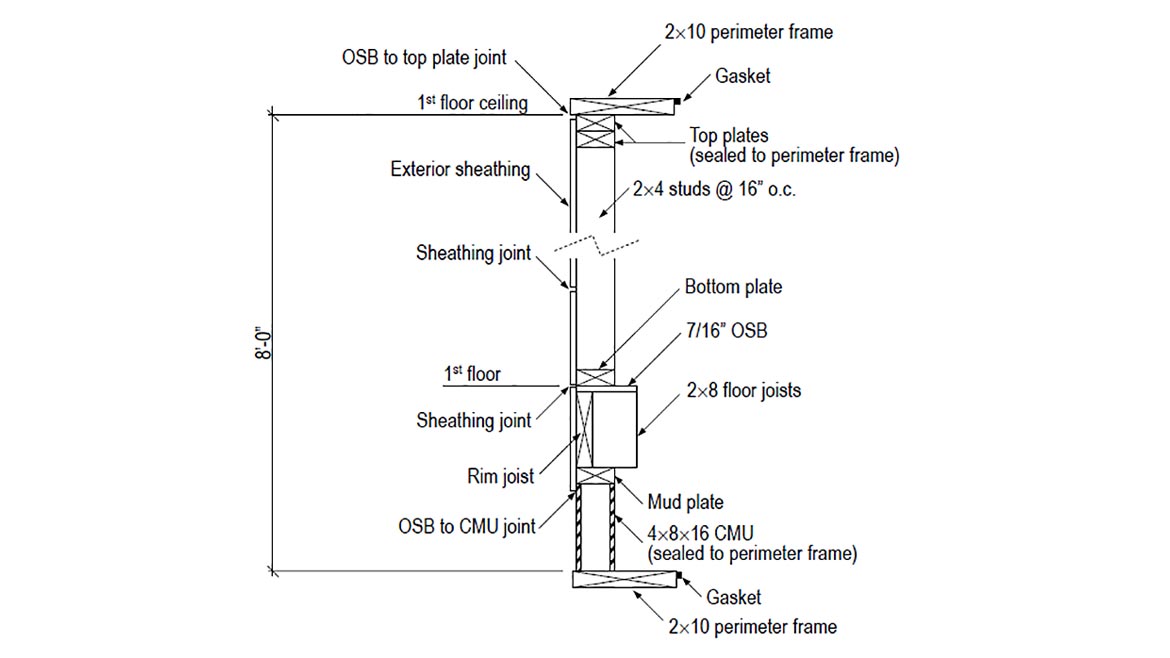 Details on the construction of this wall specimen was documented so that the base specimen could be replicated for additional testing with various types of air barrier materials being installed. To identify how much air would leak through a specific air leakage path, it was decided to test the complete wall specimen to start with, and then to seal one crack, gap or hole at a time and test after each air leakage path was sealed. The baseline wall was inserted into the test apparatus and the wall proved to be so leaky that it was impossible to create a 25 Pa pressure difference across the specimen. This confirmed that the goal of making the baseline specimen very leaky was achieved. Now, we talk about an air leakage rate at 75 Pa, but this is the reported leakage rate. In ASTM E2357, we actually test at 600 Pa, then 800 Pa and finally 1200 Pa. You will find that all testing is conducted at multiple pressure differences and normally much higher than the reported test pressure. 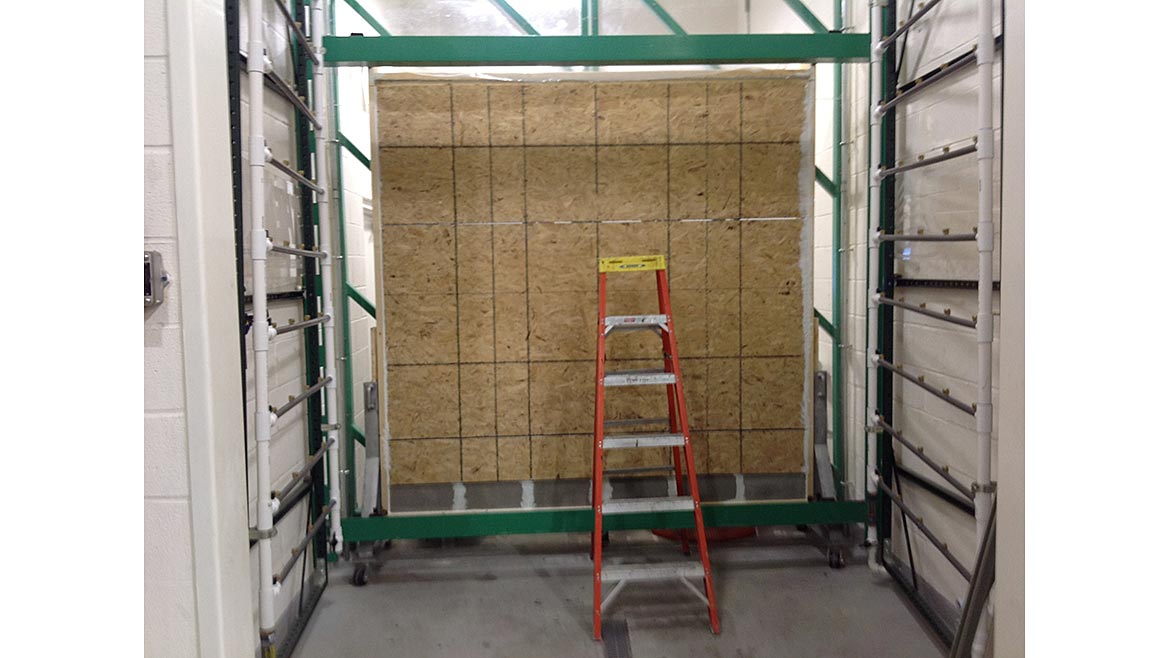 The next issue that the crew faced was to find a sealant that would set up in a short period of time so that the testing could almost be done continuously. Normal sealants and caulks require a curing time, which would drag out the testing process. Finally, an answer was found, which was to use a hot glue gun. This material set up as soon as it was cooled and provided a structural seal that withstood the loads imposed upon them by the test procedure, which created a pressure difference across the wall assembly.

To give you an idea of the loads placed on the wall assembly, a steel stud-framed wall will move back and forth 3/4 of an inch during the 800 Pa cycling part of the test. Even wood studs flex due to the loads. 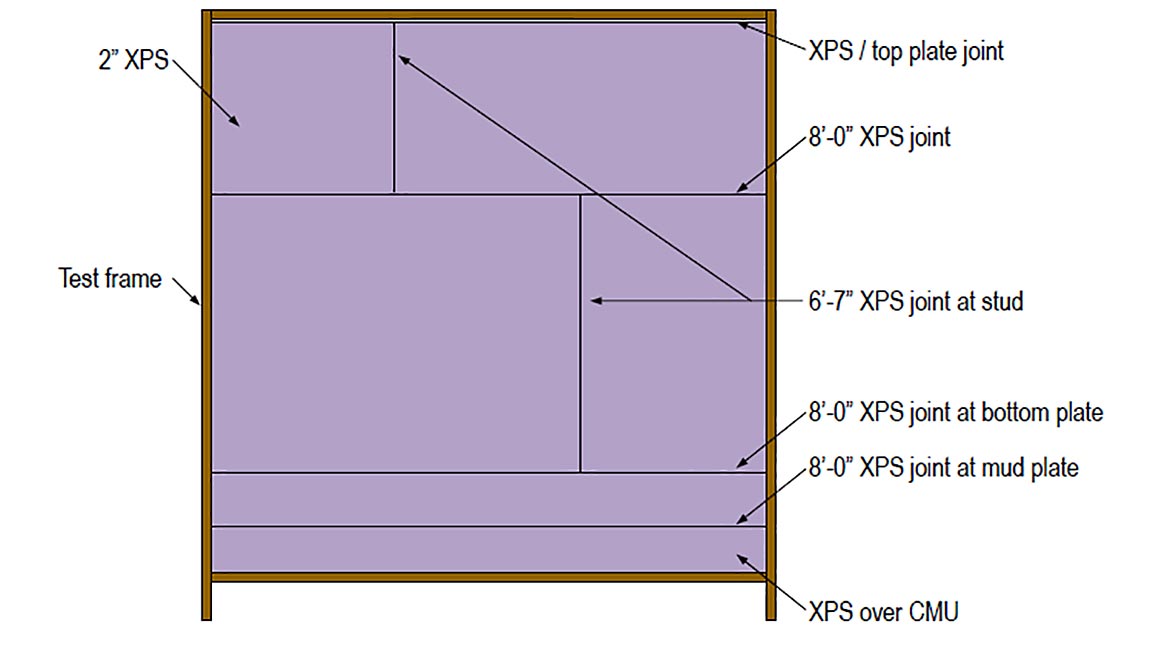 Now the crew was ready to conduct the testing. Some assumptions were made as to which air leakage path would be the largest and how leaky the different paths would be in relation to each other. The first assumption was the horizontal joints between the sheets of OSB. It was felt that if you could see through the gap, a lot of air could pass through the hole. To no one’s surprise, that air leakage path turned out to be the biggest. It was measured at 6.35 CFM/ft² at a pressure difference of 75 Pa.

I have been told forever that the foundation wall/joist header or the bottom plate to the subfloor is a huge leakage area. Turns out that is correct. It was measured at 1.91 CFM/ft² at a pressure difference of 75 Pa. 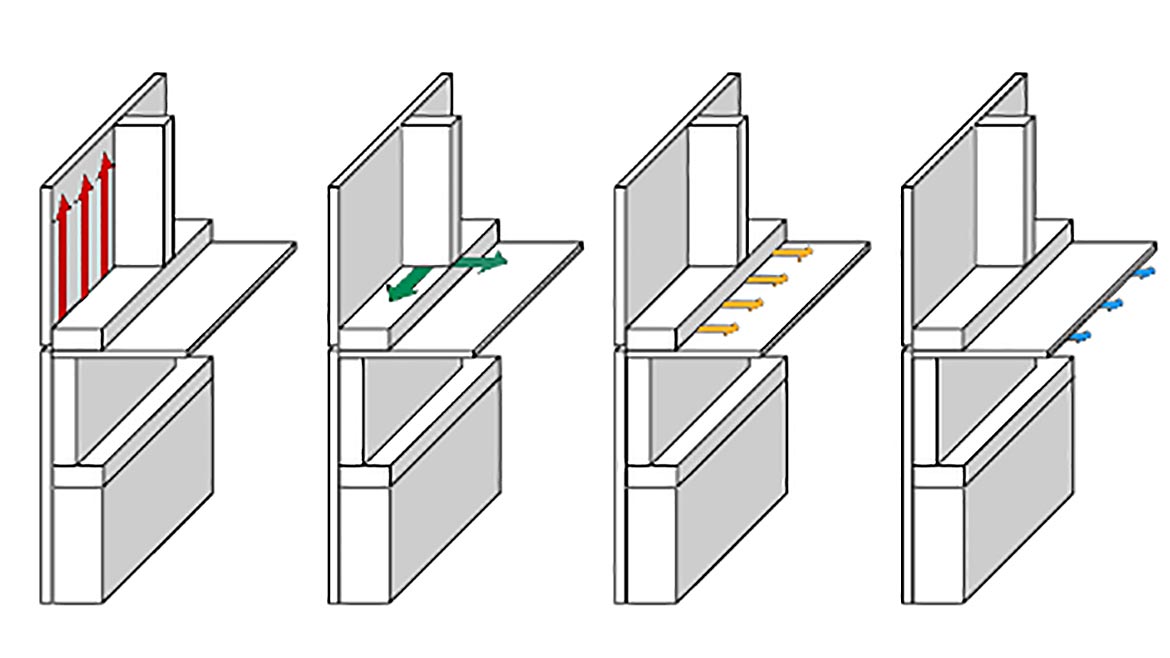 A large leakage gap that surprised the crew was the vertical joints between the sheets of OSB. Now, these joints are located on a framing member and the OSB is fastened to the stud at this point. In looking at the air leakage path, you would assume that this is extremely airtight and can be ignored for air sealing. This leak was measured at 0.8 CFM/ft² at a pressure difference of 75 Pa.

The balance of the air leakage paths was sealed and tested, and the drop in air leakage at a given rate was recorded.

Laverne Dalgleish, the executive director of the Air Barrier Association of America, focuses on the construction of high-performance buildings and is involved in standards and specifications development, research into air and water resistive barriers, site quality assurance and warranty programs. As part of this work, he has traveled North America to develop presentations and conduct industry meetings. As part of his involvement in standards, he chairs several standards development committees. Another part of his work has been to organize sectors of the construction industry into trade associations, which focus on specific issues.