In the firm’s second key commission for repeat client Blu Dot, a leading design retailer, the Office of Charles F. Bloszies FAIA has completed a major new showroom store at the foot of Potrero Hill in San Francisco. Created by reimagining and reshaping a pair of vacant buildings at the corner of Missouri and 17th Streets, the new, neighborhood-friendly adaptation offers a simplified, soft-modern backdrop for the successful Minneapolis-based manufacturer and designer of modern furniture.

Founded in 1997 by college classmates with a passion for art, architecture and design, Blu Dot designs and produces modern furniture that can be found in many independent design stores, online and in the company’s own retail locations. Their selected site at 99 Missouri included the former home of Arch, a beloved graphics supply company, with its footprint expanded to combine with a former auto body shop next door. Merging the two buildings, the architecture-and-engineering team at the Office of Charles F. Bloszies FAIA transformed the original concrete structures into a new envelope for Blu Dot’s store planners and interior designers. 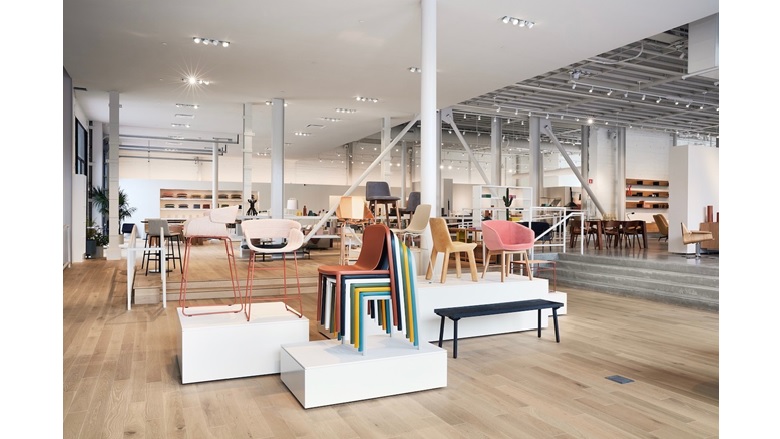 Bloszies and Blu Dot organized the removal of superfluous bracing and internal walls to open up the interior and eliminated a partially finished false façade at the corner. The team enlarged window openings to create an organized exterior rhythm and allow in more sunlight. Bloszies designed a board-formed concrete parapet extension to provide a uniform horizontal cap, creating a simplified modern profile. “We also designed steel window frames popping out of the façade like oversized Tiffany windows, fashioned to echo the scale of industrial window openings found on nearby buildings,” Bloszies said. The interior design, conceived with a minimal sensibility of an art gallery, serves as an armature in which to display Blu Dot’s product line. Floors are terraced to be flush with exterior grades at different levels, finished with unvariegated wood flooring or polished concrete. Interior fixtures are integrated with structural elements, resulting in a simple, crisp interior setting, with walls painted white to function as background for the pieces on display. Plinths built on the interior side of the pop-out windows allow product displays at eye level for street side passersby. 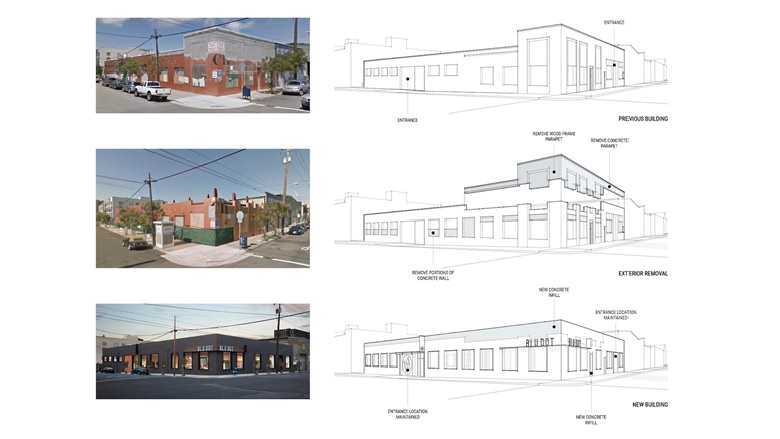 “Ever since we opened a store in San Francisco in 2013, the city has been a key market for us,” said Maurice Blanks, Blu Dot co-founder. “When our lease was up in the Mission, it only made sense for us to go bigger and better in San Francisco. Working again with Chuck and his team on the new store was seamless and the end-result is gorgeous. We love seeing longstanding, loyal clients in the new space and are enjoying meeting new friends and neighbors, all with the goal to fulfill our mission to inspire more creative ways of living through good design.”

Blu Dot San Francisco is located near the 18th Street corridor, with a 1,200-square-foot patio and what every San Franciscan dreams of — a parking lot. Inside, it was conceived to be “light, bright and airy.”

“The goal of this transformation is to provide Blu Dot with an architectural expression consistent with its furniture design ethos, while at the same time ensuring that it suits the long-established industrial character of this part of the Potrero Hill district,” Bloszies added. “In this way, Blu Dot ingratiates itself with its neighbors while creating a memorable, unmistakable home for the Blu Dot brand.”