As part of a bond to improve and expand the San Marcos Consolidated Independent School District facilities, De Zavala Elementary School completed a transformative renovation. The original elementary school, built in 1985, nearly doubled in size to the current 168,479-square-foot, two-story facility. Adding 80,000 square feet, the project features a new entryway and administration area, a renovated media center and updates to the hallways, kitchen, cafeteria and all the classrooms.

Today, De Zavala Elementary School serves approximately 600 students in kindergarten through fifth grade. More than 85 percent of students identify as Hispanic, and 20 percent are bilingual. Bilingual teachers and students speaking the same language is beneficial, but ensuring everyone is heard and understood still can be challenging.

“Good acoustics throughout a school can have a life-changing impact,” explained Chris King, Rockfon’s district sales manager. “Designing with the right ceiling makes a big difference for people of all abilities. In a typical classroom, where English is the first language, research shows that students may only hear about 75 percent of the words being spoken. That means every fourth word is missed or misunderstood.

“In classrooms with sound-absorbing ceilings, such as De Zavala Elementary’s use of Rockfon Sonar, students are able to hear their teachers more clearly and the teachers can hear their students,” King continued. “A better acoustic experience makes it easier to concentrate, learn and understand, which contributes to academic performance. School districts also know how important it is to recruit and retain good teachers. When teachers can focus on the lessons rather than on distracted students, they are less stressed out and don’t have to shout. Optimizing acoustics with sound-absorbing ceilings helps create a more productive, happier and healthier learning environment for everyone.”

For the majority of the school’s ceilings, 2-by-2 and 2-by-4-foot square-edge, lay-in panels were installed in the 15/16-inch Chicago Metallic 1200 Series system. In the renovated media center, the larger 2-by-6-foot panels were selected with a square tegular narrow edge detail and installed in a 9/16-inch exposed grid. The ceiling’s modern appearance visually unifies the renovated existing space and the newly constructed addition, providing visual continuity throughout the school. 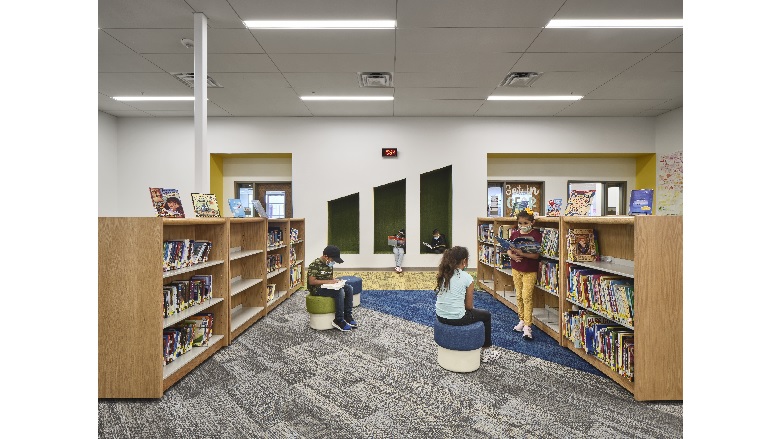 SMCISD’s plan successfully conserves energy use and significantly reduces associated utility costs. Achieving these objectives, facility guidelines include maximizing natural light during normal school hours. Rockfon Sonar ceiling panels offer a highly reflective surface to maximize daylight. Up to 85 percent of all light is reflected off the lightly textured, bright white panel. This results in diffused interior lighting, which creates less glare on screens and monitors, making it easier and more comfortable for students and teachers to read.

When the building is unoccupied, the district’s guidelines recommend setting electric lighting, HVAC and other equipment to “off” or “sleep” mode. Rockfon’s modular panels and suspension systems integrate with energy-efficient lighting, high-performance HVAC and fire suppression systems. 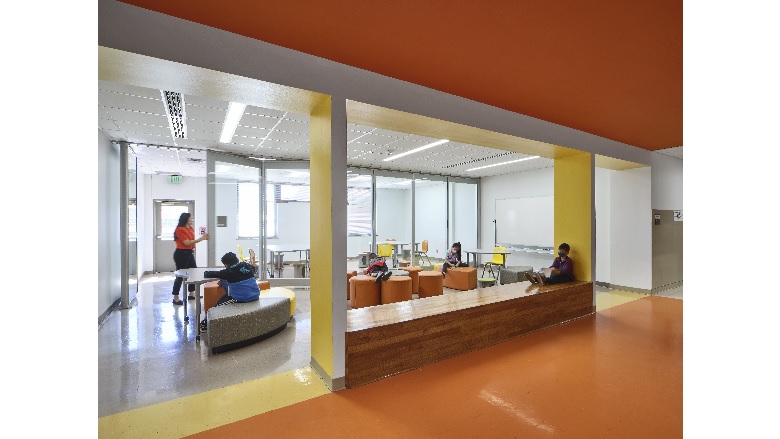 Rockfon Sonar panels also are low-maintenance and water-resistant. Even when the HVAC is shut off, these stone wool panels will not sag, rot or warp due to moisture or humidity. Without added chemicals, stone wool naturally resists flame and smoke spread and does not support the growth of mold, mildew or other microorganisms.

Children are often the most susceptible to microorganisms and to pollutants emitted from building materials. This is because children breathe in more air and, as a result, are absorbing more chemicals that can be harmful to their growing bodies. Since most children spend the majority of their year inside school buildings, these projects deserve extra attention for indoor air quality. 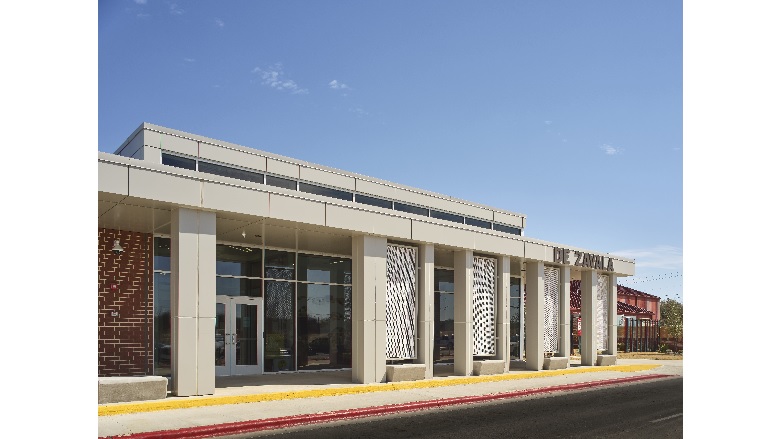