By Daniel Overbey
I was recently discussing glazing properties with a mechanical engineer for an energy model of a corporate headquarters we are working on.
We discussed U-factors first and then moved on to shading properties. The engineer and I had this awkward moment where he asked me what the shading coefficients were.
“You mean the solar heat gain coefficients?”
“No, the shading coefficients,” he responded.
This caught me off guard. He couldn’t care less about my solar heat gain coefficient values at that particular moment.
But this is not an issue of semantics. It actually brings up a point of confusion among design and construction professionals. While the solar heat gain coefficient and the shading coefficient address the same concept, they are significantly different.
Solar Heat Gain Coefficient (SHGC)
SHGC indicates the percentage of solar radiation (across the entire spectrum) incident upon a glazing assembly (window or skylight) that ends up inside a building as thermal energy (heat).
In other words, SHGC represents the ability of glazing assembly (including both the glass and frame) to resist heat gain from solar radiation.
SHGC is a ratio and is therefore dimensionless. It can theoretically range from 0 to 1, but products will typically range between 0.2 and 0.9. SHGC considers both the heat from solar radiation transmitting through the glass as well as the thermal energy absorbed and transferred inward from the glass and the frame.
SHGC in Application
A high SHGC indicates poor resistance. That means most of the solar radiation arriving to the window or skylight is getting inside and turning into heat. That's great for passive solar heating.
A low SHGC indicates good resistance. Only a small percentage of the Sun’s rays makes it through the window or skylight. That’s helpful when cooling is the dominant need. 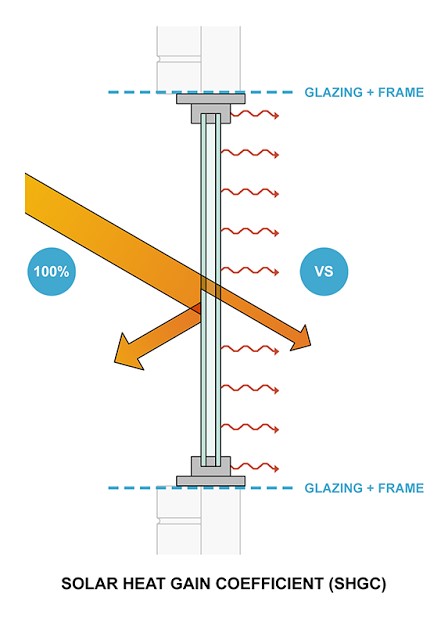 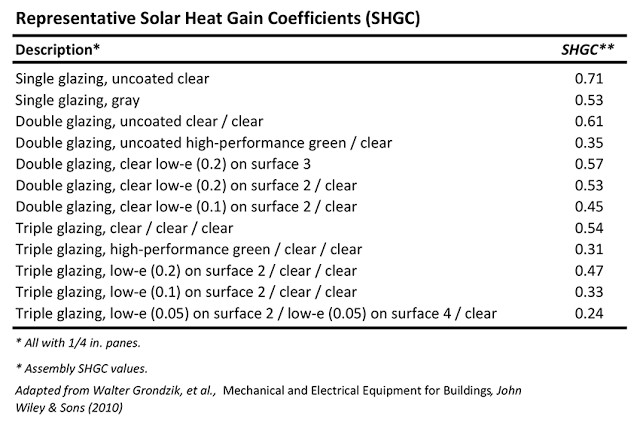 Shading Coefficient (SC)
Before the development of SHGC, the industry used SC to quantify the same concept. Similar to its successor, SC is a dimensionless ratio that can theoretically range from 0 to 1. However, SC differs from SHGC in some important ways.
SC is based only upon the glass portion of the glazing assembly—it does not consider the frame.
Moreover, SC is the ratio of radiant heat gain through a given type of glass relative to 1/8-inches-thick single clear glass. In essence, SC is an index of the effective solar rejection performance of a given glass type, however, the entire fenestration (i.e., combination of the exterior shading component, glass, and interior solar controls such as drapes or blinds) is taken into consideration.
SC in Application
As my mechanical engineer reminded me, SC is still useful in practice. In particular, it can be used for comparing glass types. SC is also useful for expressing the effects of external or internal solar controls (e.g, glass with outdoor adjustable louvers may achieve a SC as low as 0.15). 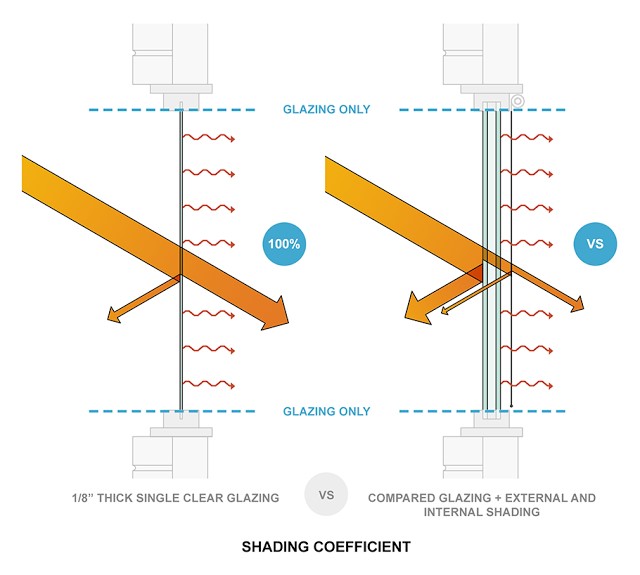 SHGC and SC are Not Synonymous
SHGC and SC are similar, but differ in significant ways. Interestingly, procedures for merging SC and SHGC values have not been entirely formalized. Design and construction professionals should always be mindful of which specific metric is being referenced in any analysis.
KEYWORDS: construction design energy model glazing properties mechanical engineering

Daniel Overbey is the Director of Sustainability for Browning Day Mullins Dierdorf Architects in Indianapolis. His practice and writing focuses on high-performance building design and construction, environmental systems research, LEED-related services, and energy modeling. He has been published in High Performance Buildings,EcoBuilding Pulse, Environmental Design + Construction, as well as other trade publications and media outlets. Overbey is also a building science educator at Ball State University's College of Architecture and Planning and the Boston Architectural College's Sustainable Design Institute.
You must login or register in order to post a comment.

A Day in the Life

There are numerous online games that provide excellent...