Buon Fresco: The Most Durable Method

ENDURING BEAUTY AND LASTING INDEFINITELY ARE ONLY TWO OF MANY REASONS TO CONSIDER BUON FRESCO.

The Villa dei Misteri, Pompeii. Raphael’s Villa Farnesina. Michelangelo’s Sistine Chapel. All are iconic classical and renaissance examples of decorative art closely allied to architecture. The enduring vibrancy of these masterful works of antiquity is attributable in no small measure to the nature of their shared medium: the buon fresco.

True frescoes are the result of painting mineral or oxide pigments into a still moist or “fresh” lime surface. The pigments penetrate into the lime and become integral to the coating as it dries and cures. Protected from the elements, a buon fresco can last indefinitely.

Support for such a claim can be found at what is thought by many to be the oldest discovered human settlement, Çatalhöyük circa 7500 B.C. Much of what we know of this ancient civilization is preserved in fresco depictions of hunting, husbandry, maps and geometric motifs of apparently purely artistic expression. Subsequent great civilizations such as the Egyptians, the Indus Valley Harappan, Classical Greece & Rome continued to make widespread use of frescoes in their respective cultures. 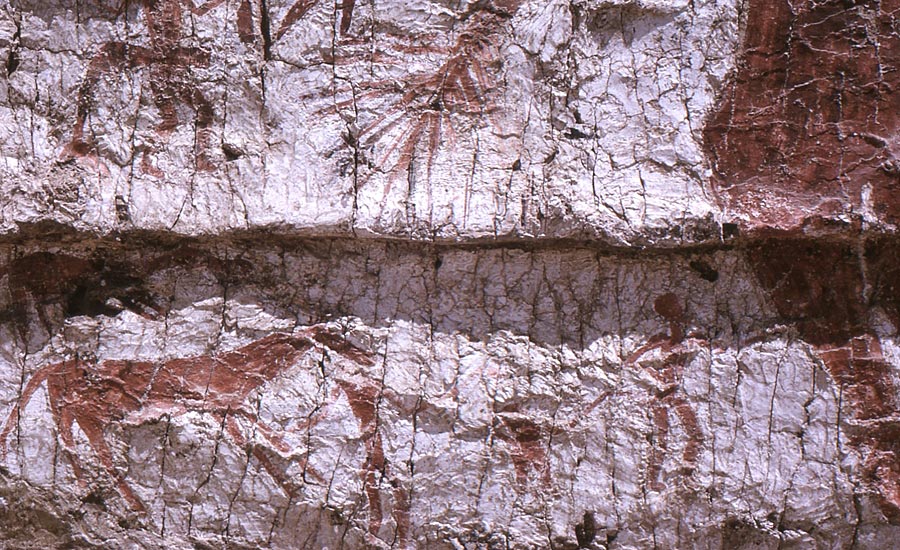 Our Western cultural heritage of art and architecture has been heavily influenced by ancient Rome. The Romans left behind many well-preserved examples of buon fresco such as those found at Pompeii, Herculaneum and Nero’s palace, the Domus Aurea. Furthermore, we can be very grateful that Roman engineer and architect Marcus Vitruvius Pollio dedicated an entire book in his multi-volume work De Architectura on preparation of supports, lime and pigments for fresco painting along with application guidelines and colorful, opinionated commentary on what he considered the overly decadent aesthetic of his day.

Vitruvius’ writings would experience publication and circulation in the early 15th century at the dawn of the Renaissance. High Renaissance artists such as Rafael, Michelangelo and Leonardo da Vinci would study and expand upon Roman examples to become great masters in their own right. This article serves as an introduction to basic fresco techniques: plastering the grounds and painting of the fresco. 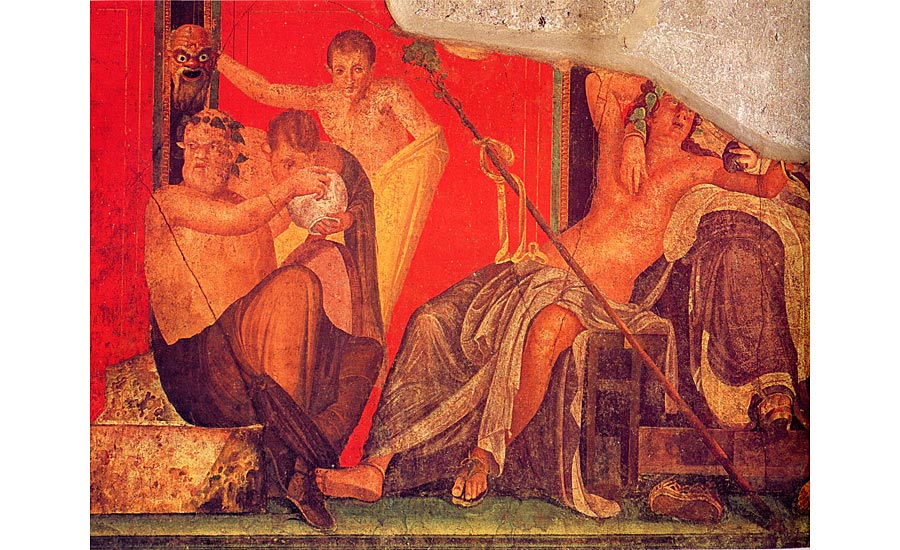 Interestingly, ancient examples of wall plasters were primarily earthen. In the dry climates of Egypt and the Fertile Crescent, fuel for burning at the high temperature production of lime required was limited. Lime was undoubtedly considered a very precious material and was often only used as a finish coat into which the fresco was painted. In Greece and Rome it became common practice to plaster in lime directly over masonry walls for important works, the Romans sometimes opting for wood lath on ceilings. Fortunately, the principles recorded by Vitruvius were utilized in the Renaissance and still apply today. The basic method to achieve a good ground always entails building up initially with a rough, aggregated coat of plaster, applying subsequently finer sand coats and finishing with a thin, smooth finish coat. The process should maintain enough moisture in the system to give the artist sufficient open time to paint into the finish coat.

Trullisatio: Vitruvius describes in great detail this rough base coat composed of lime, sand, and larger pieces of broken terracotta. A similar function is achieved with what we call a scratch or render coat. It serves as a rough intermediary between the masonry or lath support, providing good mechanical key or adhesion for the following coat.

Aricciato: Vitruvius recommended three coats using lime mixed with increasingly finer sands. This directly corresponds to a brown or float coat. Each coat is floated with a wooden trowel to compress and harden the surface. Because lime needs time and moisture to cure, each of these coats should be wet down daily and allowed to stand for approximately a week before the next coat. Following the precedent of 15th century architect Leon Battista Alberti, Renaissance and contemporary frescoists have reduced this to one or two coats.

Intonaco: Once again Vitruvius recommended three coats using lime this time mixed with increasingly finer marble powders. There is archaeological evidence that quality Roman works adhered closely to these advices resulting in total thicknesses of as much as 2 inches. Finish coats varied in the Renaissance as they do today. One Italian contemporary method is to apply a cocciopesto arenato coat (terra cotta sand added to marmorino), compress with a sponge float and immediately apply a finish marmorino. The application firms up in about two hours leaving about six to eight hours of working time to paint the fresco.

Painting the Fresco: Following the final coating of plaster, the painter must quickly begin the work of transferring and applying the design before the moisture evaporates from the plaster and locks out the pigments. Working time in buon fresco varies with the humidity of the air and the subsurface, but can generally be assumed to be around eight hours. 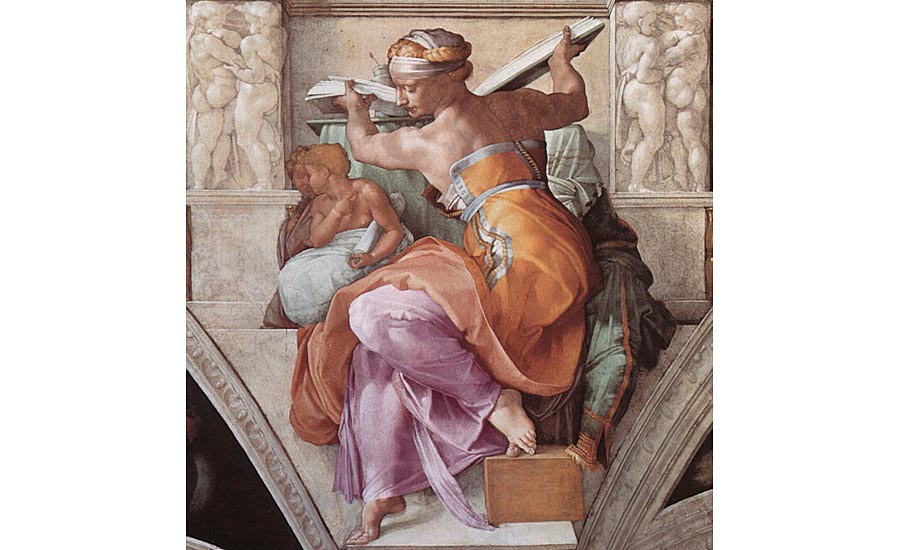 Preparation for painting is key; the design must be understood well, the colors should be prepared and ready for use. Painters of fresco in the past usually had a small crew of assistants to do the plastering, grind and mix colors, and be on hand in case an area had to be redone. It is essential to have done test samples of colors and their tints to judge what they will look like dry, as many colors will change dramatically, especially if they have been mixed with “lime milk,” which goes on clear but dries bright white.

After the plaster has been applied and allowed to slightly set, the first step is transferring the design. Sometimes the design is applied by brush under the final coat of plaster (a sinopia); in other cases it may be scribed into the soft surface or be transferred via a pounce, a drawing that has been pricked with holes to allow charcoal dust to be rubbed through it.

Once the design has been applied, the painter begins to lay in color deliberately and economically, in the manner of watercolor or egg tempera, using the color of the ground as the lightest value, although diluted lime milk may also be used as white and as a mixing tint for colors. The palette for buon fresco is limited to colors that are immune to the chemical severity of lime; several popular colors are not available for fresco, but the palette is nonetheless quite varied, as the ancient murals at Pompeii will attest to. Colors are generally mixed by hand, grinding pure pigments with water using a muller and plate, thus pigments that are toxic, such as the cadmium colors, must be used with great caution.

There are also newly available pre-mixed colors that can be used, though some purists would reject them. As the plaster dries, the colors are actually drawn down into the surface and a very thin coating of calcium carbonate rises to the top to encapsulate and protect the pigments in a very strong and non-yellowing bond. Protected from water, the painting of a fresco will last indefinitely. There are techniques for painting after the plaster has dried (called “a secco”) but that will have to be a topic for another day.

Looking to the Future

Traditional frescoes using pure lime as practiced in the Renaissance require a lengthy process taking several weeks due to the necessity of waiting for each layer of lime to cure. A practical alternative is to utilize natural hydraulic lime for the scratch and brown coats. Unlike other setting plasters or cements, natural hydraulic limes do not contain harmful compounds that could later cause efflorescence or otherwise damage the fresco. Natural hydraulic limes achieve a partial cure sufficient to receive a subsequent coat overnight. The entire buildup of grounds can be accomplished in three or four days at a total thickness of 1/2 inch.

Yet another system of grounds being researched for use directly over drywall is a blended mortar of clay, gypsum and lime. Gypsum provides good adhesion, whereas the lime and particularly clay components retain moisture for many hours, ideal properties of a base plaster receiving the Intonaco finish and fresco painting.

Intrinsic, enduring beauty has always been a motivational reason to consider buon fresco. However, advances in plaster grounds, safer pigments and reduced expense make the buon fresco not just a whimsical curiosity of the past, but a contemporary, vibrant medium accessible to every artist, including you!

Team Building: The Core of Every Company

The True Power of NDAs

Plastering: The Art of the Craft