If you’ve read the article on Hilti’s game-changing launch, then you know that Walls & Ceilings went to Europe and learned all about it. And if you’ve read about [Nuron], then you know we also got the chance to see the platform in action; but what you might not yet know is that we also had the opportunity to interview Region Head and CEO of Hilti North America, Martina McIsaac.

We interviewed McIsaac at the Hilti HQ in Schaan, Liechtenstein in between demoing the tools on our last day of the Innovation Experience. Though it was hard to leave the tools behind, I was sort of excited for this interview. I only say “sort of” because I was mostly very nervous.

I wasn’t sure what to expect from McIsaac. She’s a big deal. I’d just spent the whole week falling in love with Hilti’s mission and culture, and now I had the opportunity to “pick the brain” of someone who helps cultivate that very culture.

Fortunately for me and everyone who knows Martina, she couldn’t have been more inviting. 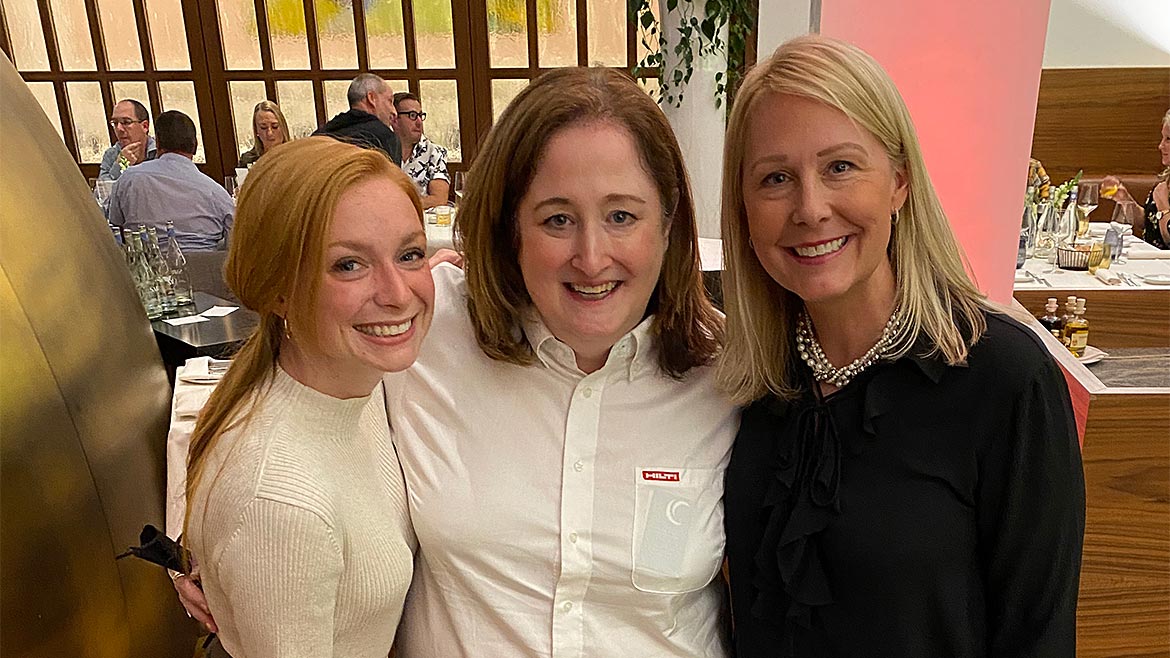 Born in the U.S. to Canadian parents, McIsaac grew up mostly in Canada. After getting her MBA from the International Program of the University of South Carolina—the leading International MBA program in the U.S. where she currently sits on the board—she worked for another multi-national for 15 years and lived all around the world in the specialty chemical space.

“So, not construction,” she laughs.

After having her second child and deciding she didn’t want to travel anymore, she took some time off. When she came back five years later, she came to Hilti.

Hilti set up a program where McIsaac shadowed the former Hilti North America CEO and learned the company right from him. Then she served as a Divisional Sales Manager in Canada in order to learn construction and life in the field, which you can tell was successful through her knowledge on the subject. From there she became president of Hilti Canada until right before the pandemic, when she moved into her role as CEO.

Believe it or not, she never saw herself as a CEO-type figure.

“I had great sponsors who saw it before I did. I never really woke up one morning and said, ‘I’m going to be a CEO’ but I had people who said, ‘You’re ready to try this.’ So, my advice to most young women is just say yes to everything you can, because you never know how it’ll knit together in the end.”

“When you look back you think ‘Oh that makes perfect sense.’ But at the time you can’t see the journey.” 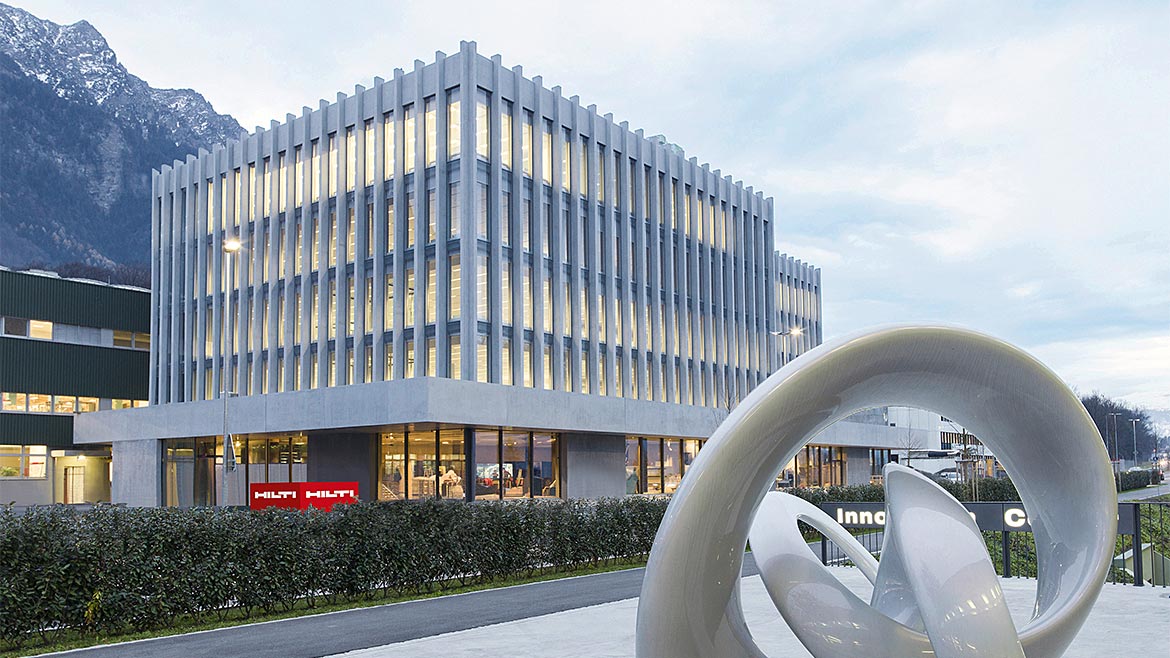 McIsaac’s Love for the Industry, and Hilti

McIsaac was just as excited as we were that the Innovation Experience was happening, seeing as we were one of the first to get our hands on Nuron. At the time, not even Hilti team members had seen them, let alone even knew what Nuron was.

“It’s really exciting for us to see someone react to years of work,” she says.

McIsaac saw Nuron for the first time about two years ago; what was thrilling for her was the elegant simplicity of just charging the battery.

That was the first Wow! The second: “Without the full portfolio of 70 tools, you couldn’t make this switch…running multiple platforms is the biggest inefficiency our customers face…and to have taken advantage of the new interface and say that we are going to build everything right from the ground up is pretty exciting. Our innovation team is just amazing.”

McIsaac says that when you think about the jobs of our industry (building buildings safely, sustainably, on time, and on budget) Hilti’s innovation spans all of that.

McIsaac has been—to use her own words—“a pandemic CEO.” She’s had to adapt the way the job’s been done before. Constant communication is key. McIsaac’s response to the pandemic as a CEO makes it obvious that she really had spent time learning the industry, because she understood the needs of her customers in their time of need.

“I read an amazing statement that said that the pandemic did more to advance technology in our industry than the last five years of venture capital funding…I think our customers have always been artisans; they’re now also becoming manufacturers. They’re working in prefab assemblies and digital construction and I think it’s important for all contractors to understand how that’s going to affect their business…I think the ability to keep up with that, and understand the impact that digitization is going to have on their business, is critical. It’s thrilling for us.”

It’s hard to tell what Martina loves most about this field. She speaks of everything with such adoration.

“It’s an amazing culture. You know, I say to people all the time, ‘Nobody tells their five-year-old daughters, ‘Hey! I hope you go into construction.' But now I hope you do, I really hope you do!” she says.

If she had to pick something though, it’d be this: “Real customers, who are real people, who do real work.”

It’s not a corporate relationship that Hilti has with its customers, she tells us. They’re real people to them who’ve mostly built their businesses on their own, transitioning from generation to generation. And because of Hilti’s long-term orientation of the Hilti family, they aren’t looking to optimize short-term profit. So Martina can actually do what’s best for the customer. It’s a commercial relationship McIsaac’s never experienced before.

“The way he envisions the industry and what could be, and what our role is, and what building a better future means, that’s actually really inspired me. To understand that we have a responsibility and a platform; so we have to do more than sell tools.” 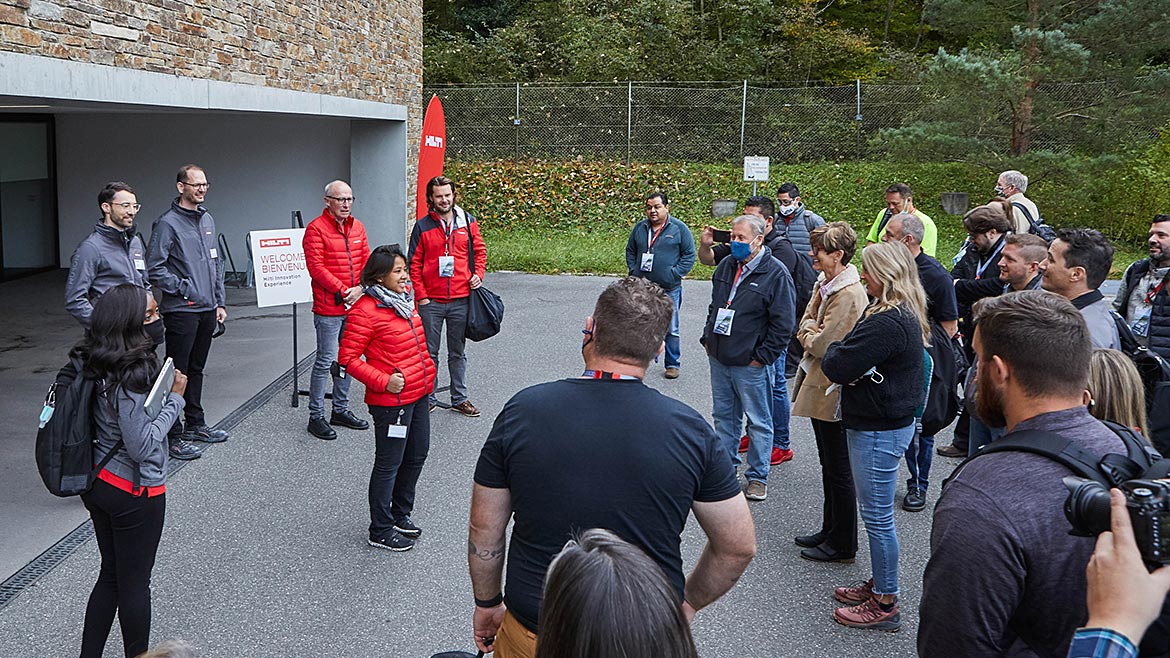 McIsaac on Attracting Talent to the Trades

Even with all of Hilti’s innovation, the industry’s biggest threat still remains: the labor shortage.

While the innovative way Hilti designs tools is intended to drive productivity that has a direct impact on how labor is used and needed, it will never be a fully automated jobsite. We need people.

“What I realized this week, is how great it was to have you here and to understand Hilti and the foundation and the culture, because you’ll help us get that message out. But what we do very actively is support women: attracting women to the trades. We have a number of college partnerships,” MsIsaac says.

Like in Dallas, where Hilti is a part of a corporate partnership called South Dallas Thrives. There, they started a workforce development program with Dallas College, where they provide support for women who want to go back into a re-education cycle and learn a trade, and join the trades. They do that in a number of places in North America.

“Because the industry has lagged behind in productivity so long, we’re not incrementally improving, we’re leap frog improving. So now all of a sudden maybe what you used to have to do with your hands, you’ll do with a robot and a tablet, that’s a totally different job,” she says.

“So, I hope we tell the story well and that we attract a lot of young people … Maybe the people who wouldn’t have looked twice at us will take a look.”

Ask anyone who knows me: I am constantly trying to convince anyone and everyone to join the trades. Programs like this, people like Martina, give people the confidence to join a trade and see for themselves what they’re capable of.

I experienced this firsthand in Liechtenstein. As a 25-year-old woman (the youngest and likely most inexperienced person at the event) using the Nuron tools and seeing how simple they were, coupled with the amount of money you can make in this industry, I even thought about trading in my pen and paper for a hammer and nails. 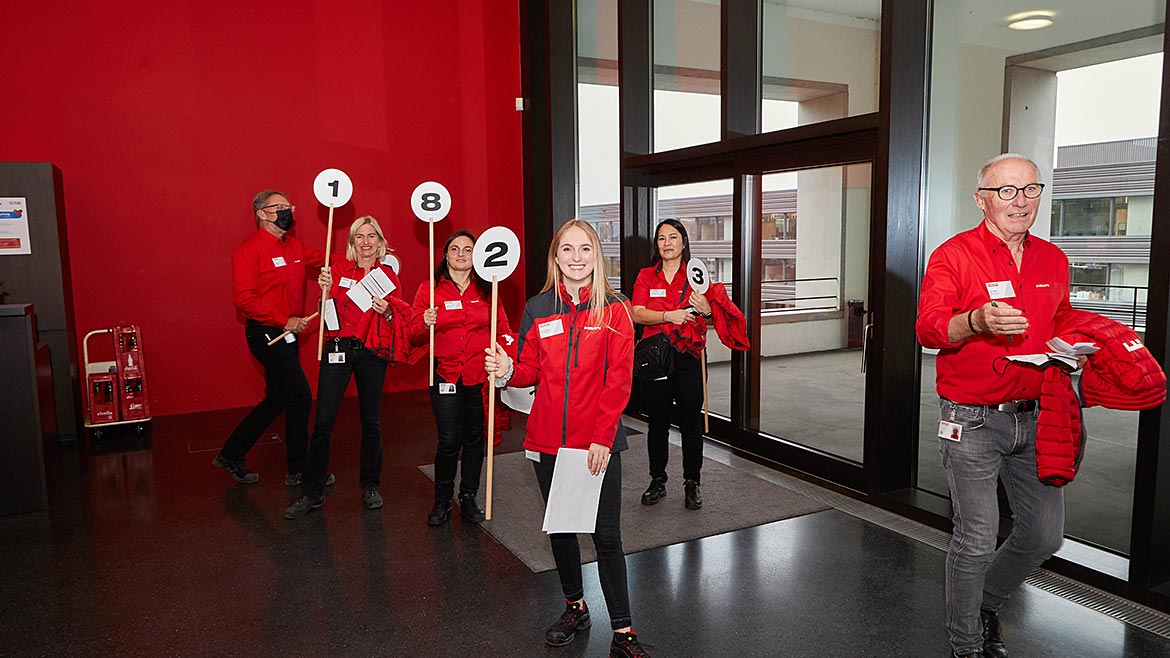 “I’ve been with Hilti for three years … and when Martina came in there just seemed to be this new energy. Martina is personable, she’s so intelligent. I can give her anything and she knocks it out of the park,” Wilson says.

“Martina is always on camera; she’s always doing interviews—and then my team and I will be like, ‘Oh, she’s so great the way that she delivers a message.’ There is no one in our company we feel can deliver a message like she does. We’re always so excited. And her energy is just illuminating and it’s great when we hear from her. She’s so encouraging.”

Wilson had confirmed everything I’d learned about McIsaac. She was inspiring. You wanted to hear what she had to say. There was this way about her that left me feeling like I could do anything. Like maybe one day, I could be CEO too.