Grandeur on a Small Budget

Although many brick-and-mortar stores have been squeezed out by online buying, Sabrina Nishjima was convinced that her Sacramento, California, neighborhood could use a new bookstore. She envisioned a modern, inviting retail space, not one of the dark, musty warrens of yesteryear. She discovered that, despite a tight budget, a little bit of well-chosen décor can go a long way. She anchored her simple design on a wall mural, a conversation-piece countertop and a rich-looking but affordable ceiling of thermoformed coffer panels that crowns simplicity with a touch of grandeur.

Her inspiration was the empty store front vacated by the McKinley Park Hair Company. “I kept walking past it and thinking, ‘this would be great for a bookstore,’” Nishjima recalled. “And my husband kept saying, ‘You’re crazy. This is the worst space I’ve ever seen in my life.’ I definitely had a vision, but not a lot of people could see it.” 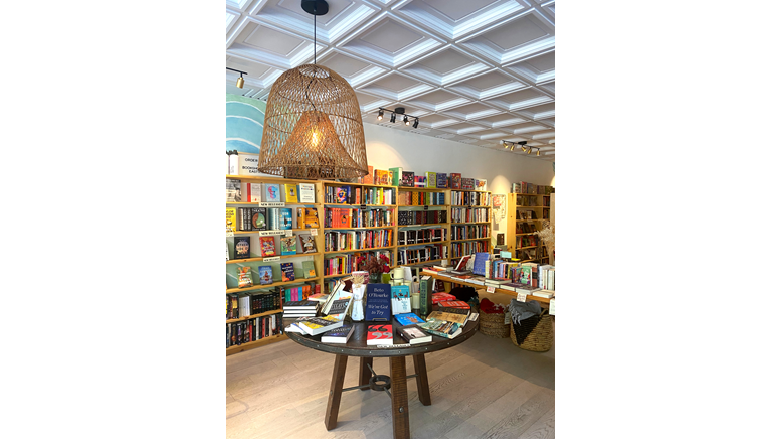 The space looked “just awful” when she and her husband signed the lease: no flooring, hair sinks that were falling apart and 11 or 12 electrical outlets surface-mounted on the walls and more hanging from the ceiling. “It looked pretty dangerous,” she recalled. The ceiling itself, a suspended grid, was ugly and useless. “A lot of the ceiling tiles were water stained,” she said. “The grid looked like people had hammered it in and out over the years.”

Nishjima’s vision was “a lot of wood, a lot of white, something that feels light and free. I wanted something upscale for the ceiling.” Not being able to afford a designer, “we decided to handle it on our own. We went to Lowe’s and Home Depot almost every day for a couple of months.”

They removed the damaged old ceiling entirely and started fresh. She wanted to raise the ceiling height 18 inches, but numerous mechanical obstructions in the above-ceiling space would have to be moved and reconfigured, making the height-increase prohibitively expensive. They replaced the suspension grid. “It wasn’t as much as I thought it would be, $1,800 or $2,000, but it was so worth it,” Nishjima said. Her contractor pushed for the conventional, familiar flat ceiling panels to fill the grid, but Nishjima “just knew that wasn’t going to work. We needed an elevated kind of look.” 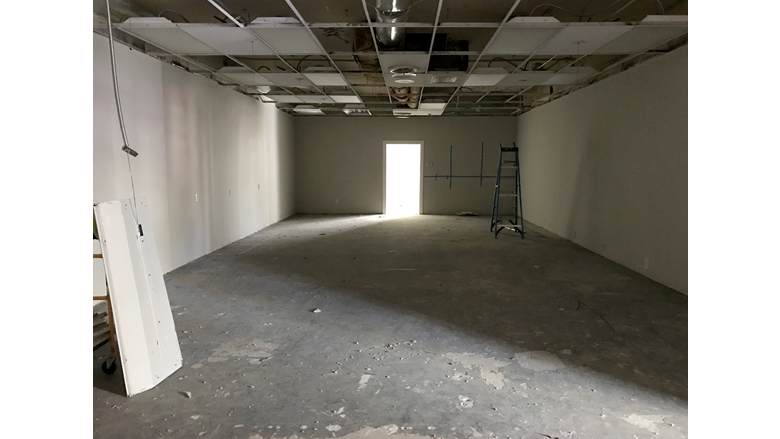 Searching online, she discovered Ceilume’s three-dimensional decorative thermoformed panels, which are made to fit standard grids. She gravitated to the coffer styles, which increase the perceived height of the ceiling. She opted for the Madison pattern – a deep-relief coffer that rises almost 2.5” – in opaque white (one of 13 available colors and finishes). She ordered thermoformed panels direct from the manufacturer without ever having seen them in person.

“When the Ceilume panels arrived, I instantly knew it was going to be great,” Nishjima said. When it came time for the contractor to install them, Nishjima and her husband, seeing the stack of panels, climbed on ladders to help. “They’re very easy to put in,” she commented. “I feel like the Ceilume panels are very sophisticated. They’re made well, and the architectural look fits our space really well. We get compliments about it almost every day.” 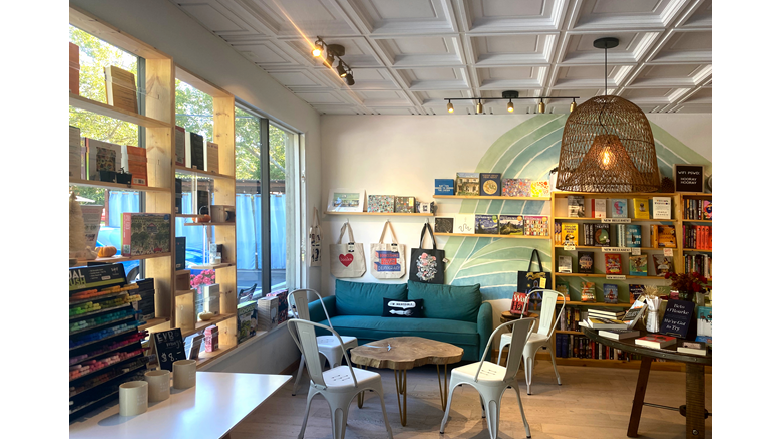 The carpenter who built the numerous bookshelves also connected Nishjima to another key décor element, the wood-slab countertop. Sourced from True Wood Hardware, a firm that specializes in fallen-wood lumber, it was a 9-foot slab of redwood that was cut and configured into an L-shape. At a total cost of about $800 for the slab itself and a lacquer finish, it has become a conversation piece, as well as the preferred setting to photograph books for marketing purposes.

She added a mural on the wall, painted by a friend, Tracy Tayama, a psychologist by trade, who has found a passion for art. The rest of the walls are filled with bookshelves.

The low-budget renovation took about two months, plus another two months to acquire inventory and hire staff. Since opening, the store has attracted considerable attention and excitement in the neighborhood and been widely covered by local news. “And, we have gotten hundreds and hundreds of compliments on the ceiling,” Nishjima added.